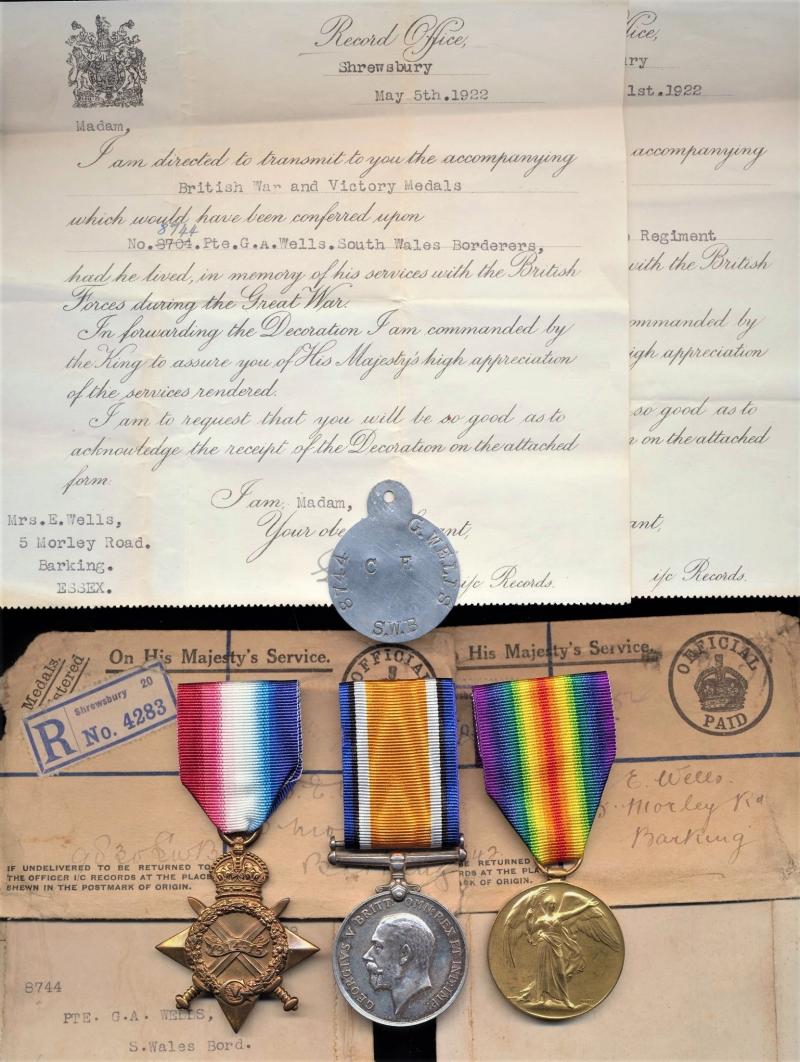 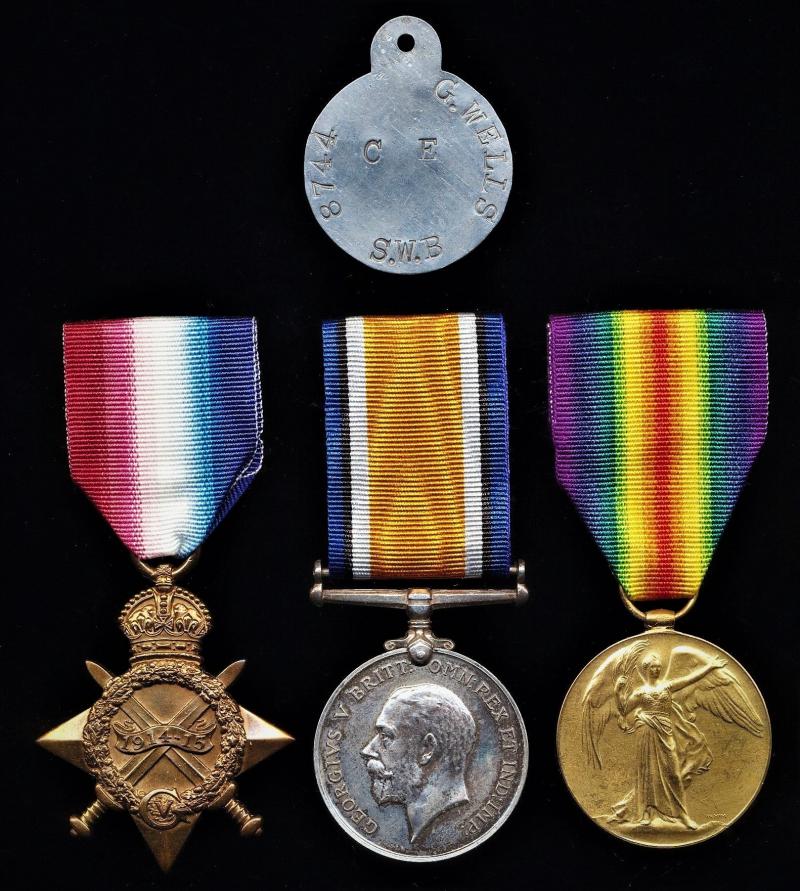 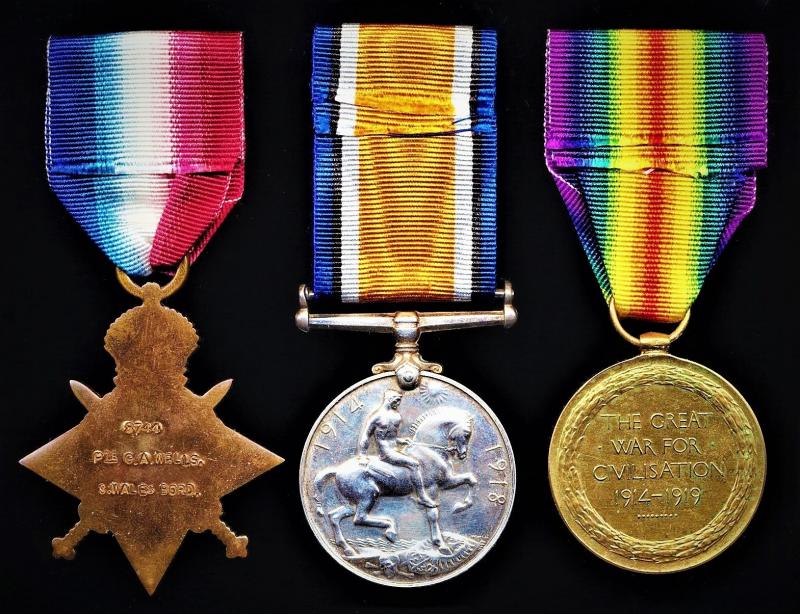 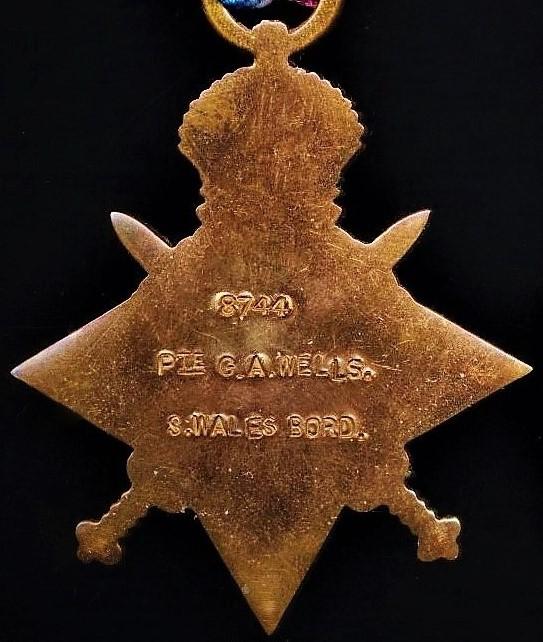 Sold together with below original identity disc & ephemera:

Note: The medal transmittal letters to the next of kin, both, shamefully with clerical errors, one with wrong number & regiment, the other with corrected number

China 1914: In August 1914, 2nd Battalion, South Wales Borderers, were stationed at China where they formed part of the British garrison at Tientsin. In September 1914, 2nd Battalion South Wales Borderers - including George Wells - and supported by half a battalion of the 36th Sikhs, joined their Japanese allies in an expedition against the German occupied territory of Kiaochau and its port of Tsingtao. On 23 September 1914, 2/SWB embarked 22 officers & 910 other-ranks who were landed at Lao Shan Bay about forty miles N.E of Tsingtao and began the difficult trek to the well fortified main German settlement on Kiaochau Bay which was the object of the expeditionary force. Casualties were generally light although the extremely arduous conditions and bad weather caused them great discomfort. Total casualties incurred by 2nd Battalion South Wales Borderers in ,China 1914 - and the only British infantry regiment to see active service in China during the entire Great War, were 50 x 'All-Ranks, who were Killed-in-Action, Died of Wounds / Deed of Disease, or were Wounded-in-Action

Gallipoli: 2/SWB were the only Welsh infantry battalion to land at Gallipoli on 'Day 1' of the landings, on 25 April 1915, when they landed with a strength of an an estimated 1000 'All-Ranks'. At the end of the first day, 2/SWB had incurred; 2 x Officers killed; 3 x Officers wounded; 12 x Other Ranks killed; 40 x Other Ranks wounded and 6 x Other Ranks missing. By the end of the Gallipoli Campaign (January 1916) 2/SWB had incurred a total of 1054 'All-Ranks' either killed or missing, & 982 'All-Ranks' wounded. Between April 1915 and January 1916, from an initial start state of 1,000 all ranks, 2/SWB had a total throughput of 2410 'All-Ranks' by the end of the Gallipoli campaign - the battalion receiving numerous reinforcement drafts during the campaign to make good losses incurred by battle casualties and disease

Unique campaign distinction: 2/SWB was the only infantry unit of the entire British Army to have served in China 1914, and then at 'The Landings' at Gallipoli on 25 April 1915 - with 2/SWB earning for the South Wales Borderers the below battle honours that the regiment subsequently carried on their colours

Note: All medals verified as entitled per the respective Great War medal rolls referenced below:

George Alfred Wells, second son of George Wells (Labourer) & Elizabeth Wells (nee Harrod) was a native of, Barking, Essex, England, where he was born on 18 December 1884. The 1891 National Census for England & Wales, records George as a 'scholar' residing at, 4 Sharps Cottages, Barking, Essex, together with both of his parents and seven other siblings comprising; 3 x brothers, Arthur (elder brother who died at Agra, India, 1917 serving with the Hampshire Regiment), Henry & Fred, and 4 x sisters, Emily, Annie, Jessie & Rosa. By the time of the 1901 Census, George's mother had died, and his widowed father, together with George and the rest of the family, were residing at, 41, Bonny Downs Road, East Ham, London, at which time George, was described as employed as a 'Barman' albeit only 16 years of age. Basis George's regimental number '8744', George is known to have enlisted into the British Army in early 1905, at which time he was posted to the South Wales Borderers. At the time of the 1911 National Census for England & Wales, George is shown as serving with 2/SWB, at Pretoria, South Africa. In the period 1911-1914, Walter would have served with 2/SWB in Pretoria, South Africa, and then proceeded further afield to the Far East, arriving in China, where the 2nd Battalion South Wales Borderers were a garrison battalion located at, Tientsin, September 1912 to October 1914. Shortly after the outbreak of the Great War, 2/SWB, together with George Wells, was selected as the only infantry battalion of the British Army (together with a half battalion of 36th Sikhs, of the British Indian Army) to enter theatre of war 'China', when on 23 September 1914, the battalion was landed at Lao Shan Bay for field service in the 'North China Campaign' at the siege and capture of the German colonial port at Tsingtao. On 4 December 1914, George together with the rest of 2/SWB was embarked at Hong Kong Colony bound for the United Kingdom. On arrival in the United Kingdom, 2/SWB was allocated to 87th Infantry Brigade under higher formation of 29th Division - an 'All-Regular' division of the British Army. George Alfred Wells disembarked, under fire, at Cape Helles 'Gallipoli' on 25 April 1915 - a 'First Day Lander' - and barely three days later was recorded as being 'Killed-in-Action'. After his death, George's personal effects and medals were forwarded to his nominated next of kin, Mrs Emily E. Wells, who became a War-Widow in 1917 (wife of his brother Arthur Wells), and who post-war was residing at, 5 Morley Road, Barking, Essex, England

A rare & desirable Great War casualty medal group with the recipient having first qualified for his 1914-15 trio for his service in China, and who then served at Gallipoli, where he had the distinction of being a 'First Day Lander' and who was 'Killed-in-Action' at Cape Helles only 3 days later!