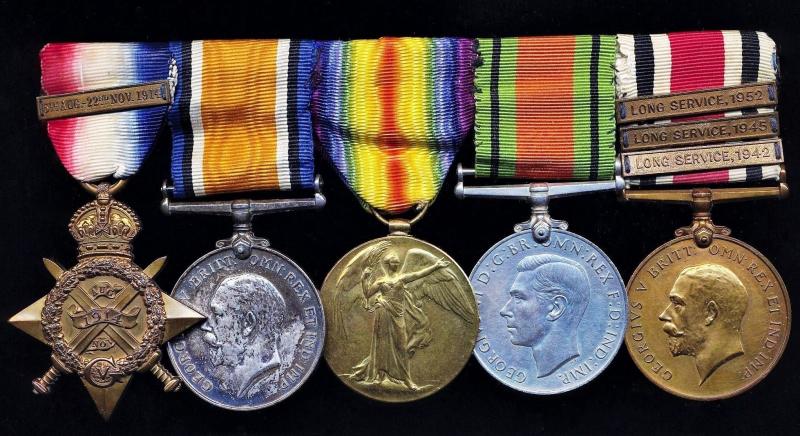 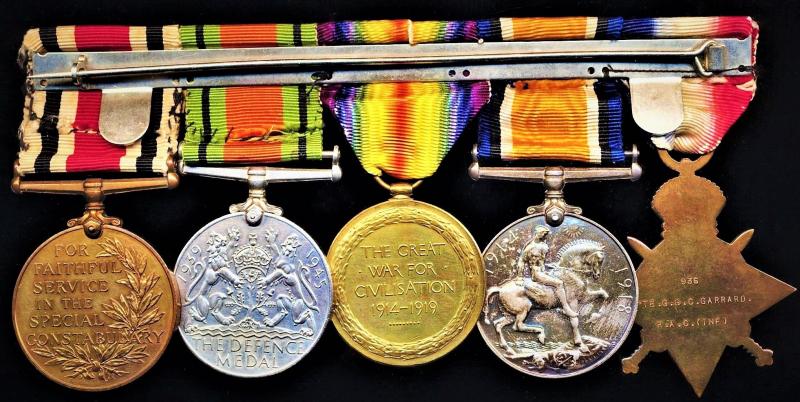 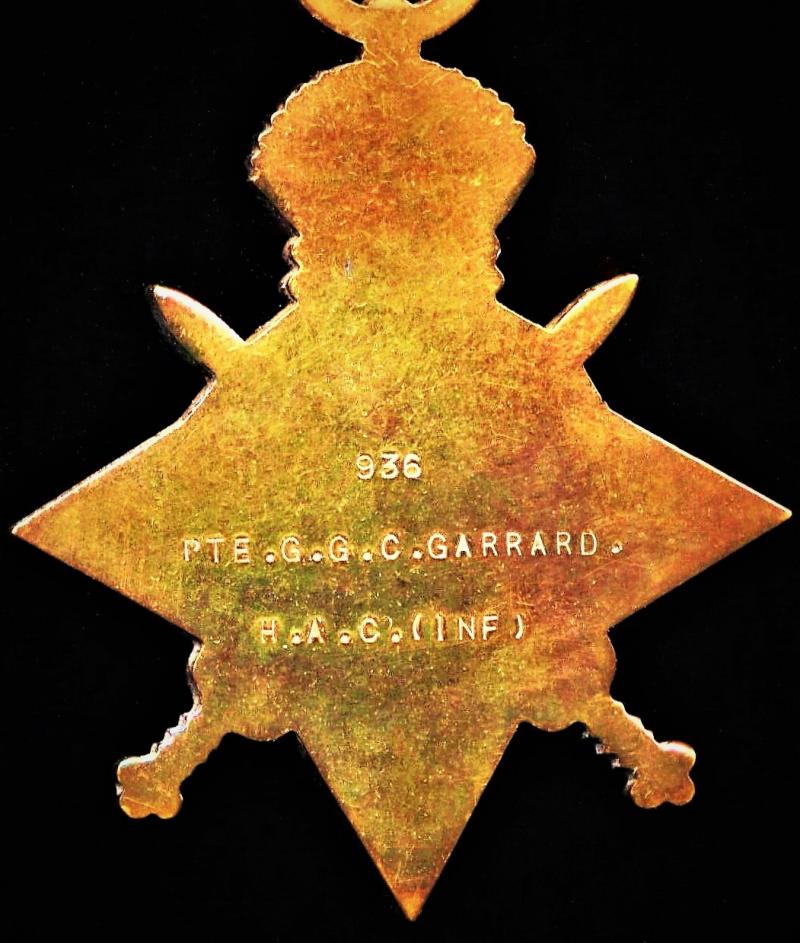 Note: All medals correctly officially impressed per Army protocols the pair showing the highest rank held while last serving 'In The Field' (the recipients subsequent commissioned service from 8 August 1915, was spent on 'Home Service')

George Gilbert Crowther Garrard, eldest son of Dr George Garrard, M.D. (a Surgeon who had been born in Hobart, Tasmania) and Mary Garrard (nee) was a native of Paddington, London, England, where he was born on, 6 April 1891. The 1901 National Census for England & Wales, records George as living at home together with his 3 x siblings comprising, elder sister Eva Mary A. Garrard & younger brothers, Thomas R. Garrard & Frederick B. Garrard (awarded Military Cross in Great War) and his younger sister Eva M A Garrard. In 1901, the family maintained a domestic establishment of 3, including a Governess, a Cook and a Housemaid. By 1911, the National Census for England & Wales shows George still living in the family home and described as a 'Student', with the Garrard family maintaining a domestic household of 4 x servants - very much an 'Upstairs - Downstairs' family of considerable means. George Crowther is recorded as having enlisted enlisted in the British Army on 4th August 1914, on which date he joined the 1st/4th (1st Battalion No 4 or 'D' Company) Honourable Artillery Company (Infantry). George first entered theatre of war 'France' on 18 September 1914, and qualified for the 1914 Star with dated clasp - and almost certainly present with his unit at the 1st Battle of Ypres (Oct-Nov 1914). promoted to Corporal, George remained on active service in the field in France with the British Expeditionary Force, through to 12 May 1915. After returning to the United Kingdom, George, like the majority of H.A.C. volunteers who had survived the fighting of 1914 and early 1915, was commissioned as an officer in the Royal Engineers on 8 August 1915, when he was posted to 3/2 Field Company 'Home Counties' Divisional Engineers, Royal Engineers. George remained in uniform on 'Home Service' in the United Kingdom for the remainder of hostilities and never again returned to the 'Western Front' or on other 'Overseas Service'. During his 'Home Service' George held the rank of Lieutenant, and had served as Acting Captain. In 1919, and after taking his discharge from the British Army, George G. C. Garrard married his cousin - and next door neighbour - Gladys Lorna Garrard. The couple were blessed with a son, John Maurice George Garrard, who was born on, 28 March 1921. son of Garrard (Stockbroker's Clerk - ex H.A.C. (Inf) & Gladys Lorna Garrard (nee Garrard) was a native of, Eton, Buckinghamshire, England, where he was born on, 28 March 1921. The 'Garrard's' multi-generational family residence was located at;

By the time of the compilation of the 1939 National Register for England & Wales, George Garrard is recorded as employed as a 'Stockbrokers Clerk' residing at the 'Braziers' Eton address, with remarks that he was also a member of the 'Special Constabulary'. George Gilbert Crowther Garrard, of 'Braziers', Iver Heath, Eton, Buckinghamshire, England, is recorded as having died on, 12 May 1981

The officers service papers for Lieutenant George Gilbert Crowther Garrard are extant, and held & are accessible at The National Archives

The medals mounted in the swing-style suspended form original issue silk ribands, and as-worn by the recipient. The reverse of the medal mounting bar with long hinged pin and clasp fittings

Sold together with hard copy of the recipients Medal Index Card

A fine medal group to a 'Stockbrokers Clerk' who served his country in both World Wars including service with the Honourable Artillery Company (Infantry) in 1914-15, prior to being commissioned