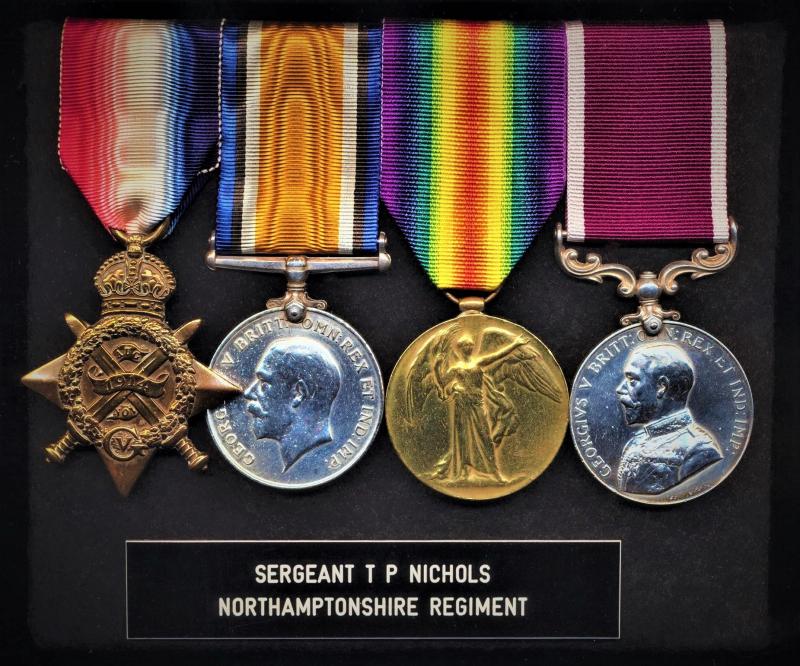 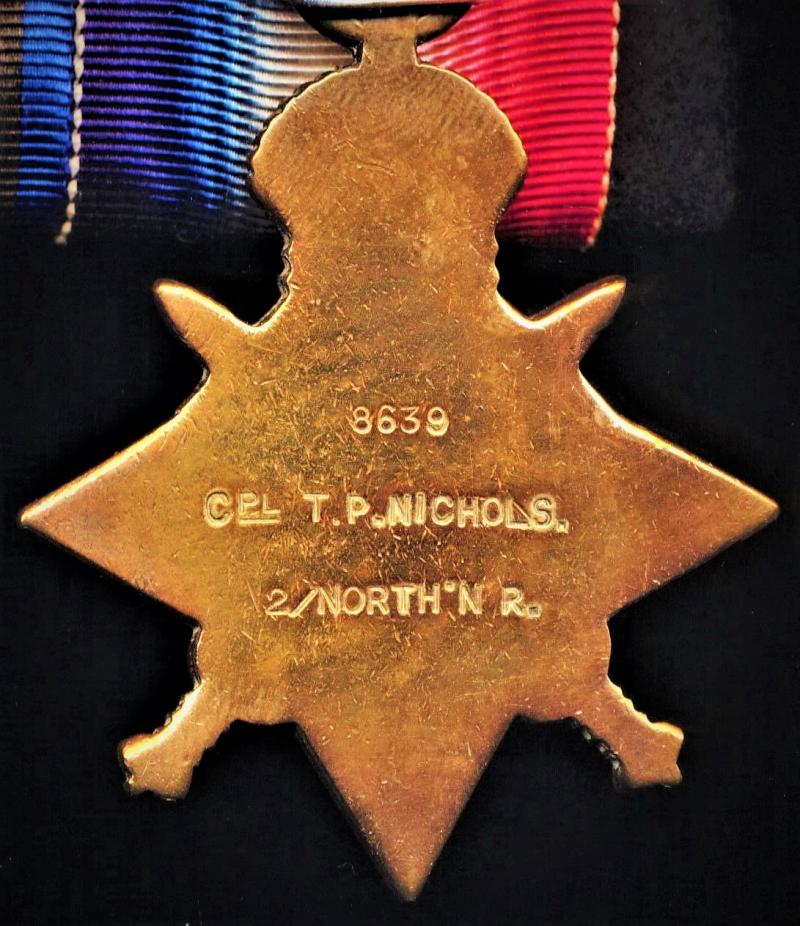 Important: All campaign medals verified as entitled & issued per the respective Great War medal rolls of the Northamptonshire Regiment as under:

Thomas Phillip Nichols, fifth & youngest son of Richard William Robert Nichols (a 'Shoemaker') & Sarah Jane Nichols (nee Jones) was born at, Taunton, Somerset, England, 9 August 1886. Thomas lost his father in 1887, the same year in which Thomas and 3 of his elder brothers (Arthur Henry, Richard John & Percy Gilbert) were baptized on the same day at the parish, St Andrew's, Rowbarton, Taunton, Somerset, on 30 June 1887. In addition to the 3 x brothers already mentioned, Thomas had another 3 x elder siblings, viz brothers, Robert & Frederick, and a sister, Emma. By the time of the 1891 National Census for England & Wales, the Nichols family, headed by the widowed mother, Sarah (described as a Cook) was living in, Bristol, England, and at that time the family included, Thomas, with his elder sister, Emma, and elder brothers, Frederick Charles (who served 16 years in the British Army, firstly 8 years with the Black Watch, and secondly 8 years with the Northamptonshire Regiment - which was same regiment that his younger brother, Thomas Philip Nichols also served. Thomas enlisted in the British Army sometime during the Edwardian era, and in the 1911 National Census for England & Wales is shown residing with his sister Emma and brother-in-law, Arthur Henry Yoxall, at, 17 Brookland Terrace, Caerphilly near Cardiff, Wales, where he is described as a 'Soldier'. Thomas Philip Nichols was holding the rank of Corporal and serving with 2nd Battalion Northamptonshire Regiment when he first entered theatre of war 'France' on 8 November 1914, thereafter being quickly posted to the 'Frontline' and entitlement to the 'dated clasp and roses' for the 1914 Star. By the end of war, Thomas held the rank of 'Acting Sergeant', and continued to serve with the Northamptonshire Regiment in the immediate post-war year, being allocated a new unique 'Army Number' - 5876501 - from the block allocated to the Northamptonshire Regiment in 1920. Thomas, had taken his discharge from the British Army sometime prior to the 8th November 1924, as on that date he embarked on the ship 'Empress of Scotland' for destination, Canada, where he intended to live with his elder brother, Frederick. Interestingly, he described his profession on the immigration passenger card - and on his subsequent marriage certificate - as 'Musician', which likely indicates that served in the regimental band of the Northamptonshire Regiment as a 'Bandsman' (NCO / Bandsman) during his military service. His extant immigration passenger card shows that his destination residence in Canada, was to be with his elder brother, 'Frederick Charles Nichols' whose address was 'Mr F. C. Nichols, Chief of Police, Carelton Place, Ontario' (Frederick served as a Company Sergeant Major with the Canadian Corps of Military Police / Special Battalion in Canada, during the Great War). During his stay in Canada, Thomas Nichols, married, Elsie Partridge, at Smiths Falls, Ontario, Canada, on 16 June 1926. The couple did not settle down in Canada as by the time of the compilation of the 1939 National Register for England & Wales, the couple were living with their two children, including son Norman (born 1 April 1933) at, 5 Paultow Road, Bristol, England, with Thomas shown as employed as a Warehouseman. Thomas Philip Nichols is recorded as having died at Bristol, England, sometime during the first quarter of 1965

The medals attractively mounted for display on a black, felt backed board, with a plasticated naming plaque applied