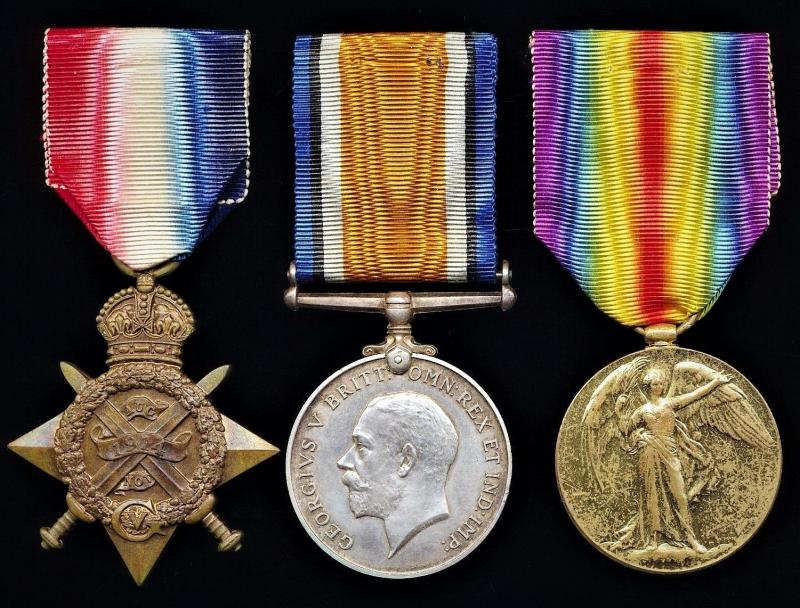 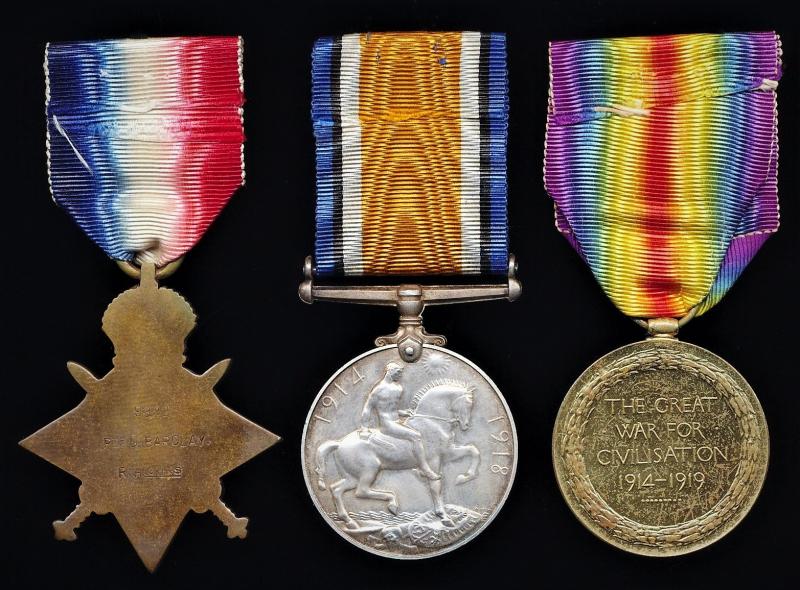 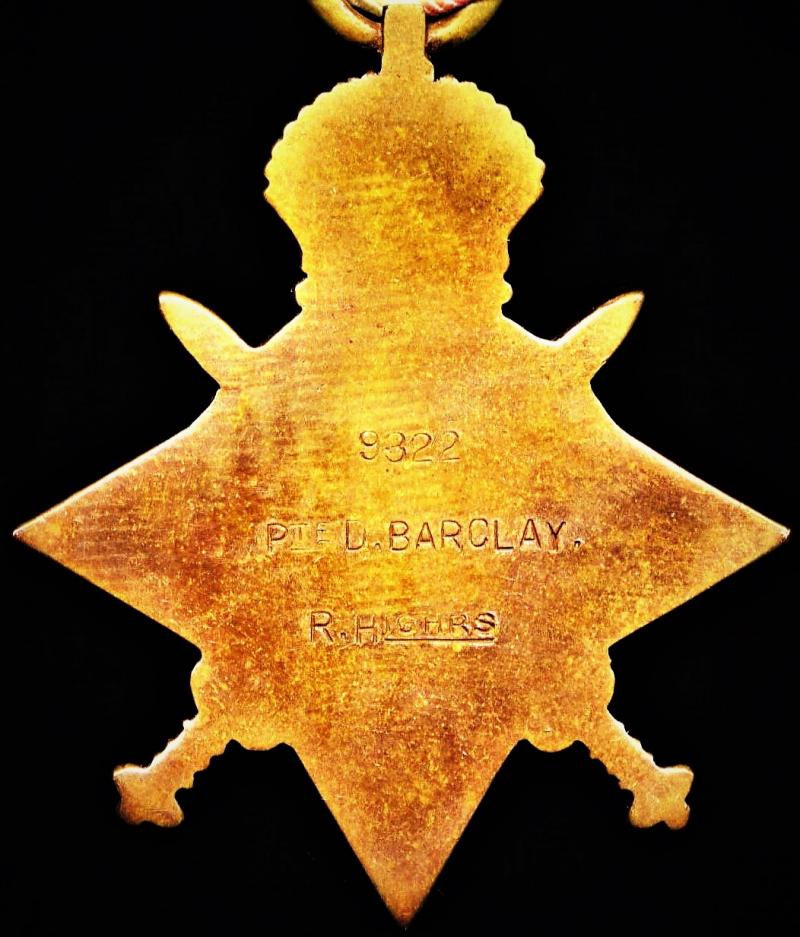 Note: All medals verified as entitled per the respective Great War medal rolls of the Royal Highlanders (Black Watch) as under:

Note: In spite of his double wounds in 1914, the recipient was never issued and never subsequently claimed the dated clasps and roses to which he was eligible

First Hand Narrative Report: The 'Fife Free Press, and Kirkcaldy Guardian' issue of, 26 November, 1914,contains a lengthy narrative report given by David Barclay while on 'Furlough' recovering from his 'Wounds' in his home town.

THE "FREE PRESS" IN THE TRENCHES

Private David Barclay of the 1st Battalion Black Watch, is at present home on a short furlough, having been twice wounded in the fighting on the Continent. Interviewed at his mother's residence in Cross Street Dysart, by a "Free Press" representative. Private Barclay stated that he joined the Black Watch, on 9th October, 1902, and after three years with the colours, passed into the Reserve. He had only two months of his nine years reserve period to go when called up on the outbreak of war. Private Barclay told the story of his regiment's share in the fighting very modestly. The first "scrap" they had with the enemy was at a small village named "Jerusalem", on the same day as the Munster Fusiliers were severely cut up, and then commenced the historic retreat, in which the Black Watch took part in two or three rearguard actions. After they had turned about to advance again, and about two days before the real battle of the Aisne commenced, Private Barclay was wounded at Vindresse, through being struck on the head by a piece of shrapnel. He was put into the temporary hospital at the village of Mouline, on Monday 14th September, and the following day just as a number of them were leaving for the base hospital, the temporary hospital was shelled, and those who were able had to make off as best they could, being picked up tow or three miles further on by a motor transport. After being treated at St. Nazarre hospital, Private Barclay went into the Convalescent Camp, and later on to the Rest Camp, where 250 of the Black Watch Reserves were stationed. While there 100 of the men got word to keep themselves in readiness for returning to the front, where for nine days they took part in the battle of the Aisne, after which they were relieved and transferred to the left flank, which was now in Belgium. At La Bassee the Cameron's had got it pretty hot, and two platoons of the Black Watch were sent down to reinforce them. It was while they were advancing at this stage that Private Barclay was wounded for a second time, being wounded in the back by another piece of shrapnel. Asked as to the German rifle fire, Private Barclay said it was no good, but their shell fire was very dangerous, and one shell had knocked out about 100 French infantry. He had never taken part in a bayonet charge, but on one occasion, when they were ordered to charge the Germans, whenever the Teutons saw the bayonets they fled squealing like pigs. He had twice read the " Free Press" in the trenches, one of his comrades having it sent out to him regularly. They were eager to get the home news, and also read with interest the narratives of their comrades home from the front.

The following descriptive account of a charge by the Highlanders is from a French paper, that publishes an English edition, and the cutting handed us by Private D. Barclay, Dysart, refers to the fighting near La Bassee, as described by a French officer, accompanying the Allied forces.

"At all costs it was necessary to create a diversion in order to give our gunners a chance of crossing the zone of fire. The General commanding the British forces claimed for his troops the honour of leading the attack. Then we saw the Scotsmen advance from our left wing. Without a moment's hesitation they plunged into the hail of shell. Without suffering great losses they approached nearer and nearer to the great guns. They stopped an instant to fix bayonets, and then charged to the sound of their beloved pipes. They charged like Sir Walter Scott's heroes, with their glengarries and dancer's skirts. Neither ditches nor barbed wire stopped these wonderful warriors. Their dash carried them right up to the guns, striking down the frightened artillerymen. It was the work of seconds only to remove the breech-blocks, and thus put the huge field pieces out of action. The whole affair lasted only ten minutes".

Third Time Wounded: The Fifeshire Advertiser issue of 22 May 1915, contained the below notice pertaining to David Barclay's 'Third Wound'

WOUNDED FOR THE THIRD TIME

Mrs Barclay, Cross Street, Dysart, has received a postcard intimating that her son, Private David Barclay, of the 2nd Battalion Black Watch, has been wounded, and is lying in the base hospital in France. This is the third time Private Barclay has been wounded. He was home towards the end of last year. He returned to the fighting line in January, and took part in the fight at Neuve Chappelle.

David Barclay son of Alexander Barclay & Elizabeth Hain 'Betsy' Barclay (nee Bell) was a native of Dysart, Fife. Scotland, where he was born on 16 March 1885. By trade a 'Coal Miner', David, falsely declared his age to be 18 years and six months of age - he real age was 17 years &s ix months - when he enlisted in the British Army, at, Kirkcaldy, Fife, Scotland, on 9 October 1902 , on which date he was posted to the Royal Highlanders (Black Watch). Prior to his enlistment in the regular British Army, David had been serving as a volunteer in the Fife Royal Garrison Artillery (Militia). At time of attestation, David had contracted himself for a 'Short-Service' engagement with the British Army, that comprised 3 years 'With the Colours' and 9 years on the Army Reserve. David was posted to 1st Battalion Royal Highlanders, and served with 1/Royal Highlanders through to taking an 'early' transfer to the Army Reserve on, 27 January 1905. On return to civilian life, David returned to Scotland, where in 1907, he was cited in a paternity suit, pertaining to the birth of his daughter, Beatrice Jean Healy who was born in Dysart, Fife, on 18 December 1907. On, 2 September 1910, David married Elizabeth Canning, at Edinburgh, Scotland. On 5 August 1914, David was mobilized at Perth, Scotland, being recalled to the Black Watch Depot, and 2 days later was posted back to his former unit, 1st Battalion Royal Highlanders (Black Watch)

At the time of the outbreak of the Great War, 1/Royal Highlanders was stationed at Aldershot, Hampshire, England, where it was part of 1st Brigade, 1st Division of the British Army. David Barclay, together with the rest of his unit, 1st Battalion Royal Highlanders (Black Watch). first entered theatre of war on 13 August 1914, when they embarked for France, landing at Le Havre the following day 14 August 1914. Although clearly entitled to a dated medal clasp to his 1914 Star, and being confirmed 'Wounded-in-Action' by 'Gunshot to the Head' on 28 October 1914, he never subsequently claimed or was awarded the 'Clasp & Roses' that he was entitled, and which, were never endorsed on the respective Medal Index Card or 1914 Star medal roll. During 1914-15, David served overseas in France & Flanders as under:

On 8 October 1915, on completion of termination of his first period of engagement, David took his discharge from the British Army, having served 13 years, with the 'Black Watch', his military conduct being described as 'Exemplary'. Shortly after taking his discharge, David Barclay, re-enlisted in the British Army on 25 October 1915, at which time he joined the 1/6 Company 'Forth' Royal Garrison Artillery (Territorial Force), an artillery unit domiciled and generally deployed in the 'Firth of Forth' region on the east coast of Scotland. During his service with the 'Forth' Royal Garrison Artillery, Gunner Barclay remained on 'Home Service'. Gunner Barclay was transferred to the Class W. (T) Reserve on 12 December 1918, by which time time he had completed 3 years and 51 days in the Territorial Force

Sold together with some copied hard-copy research

A superb group of medals to a 'Jock', who was thrice 'Wounded-in-Action', while serving in the 'Thick of It' with the Black Watch during the Great War, - all his wounds being sustained in the early fighting of 1914 & 1915, including being present at the the actions & battles of Vindresse, La Bassee, Aisne in 1914, and in 1915 at the Indian Corps battle of Neuve Chappelle