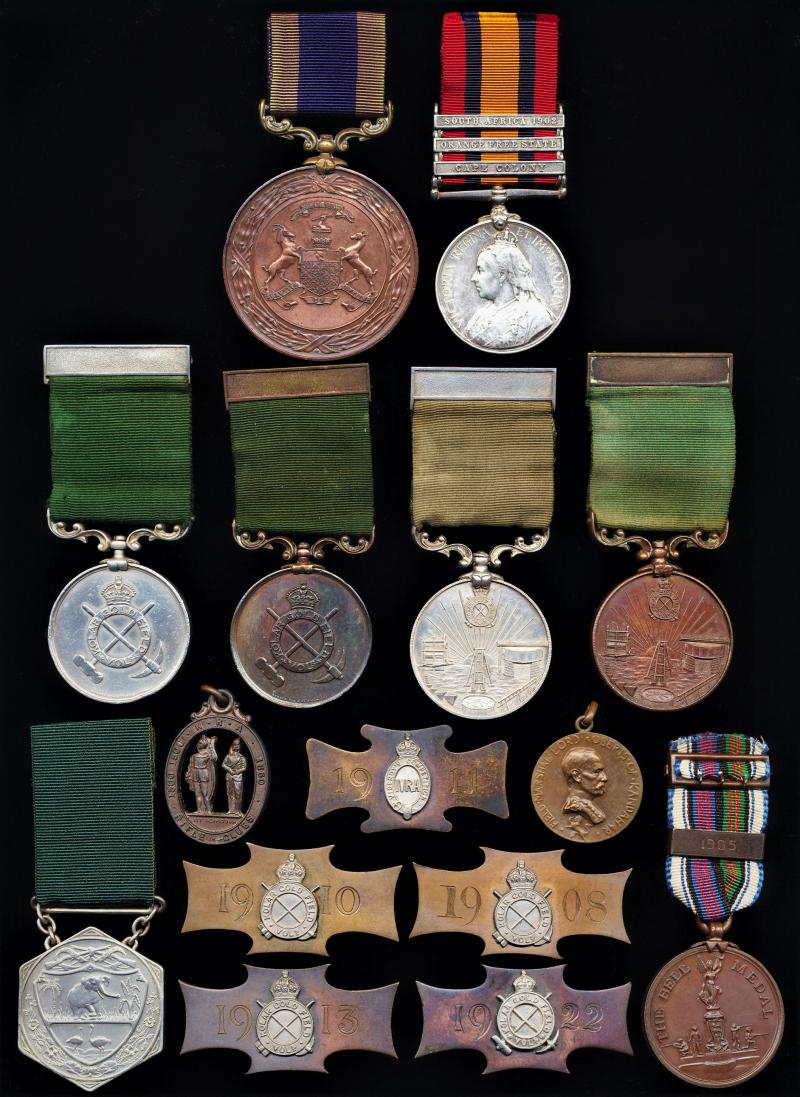 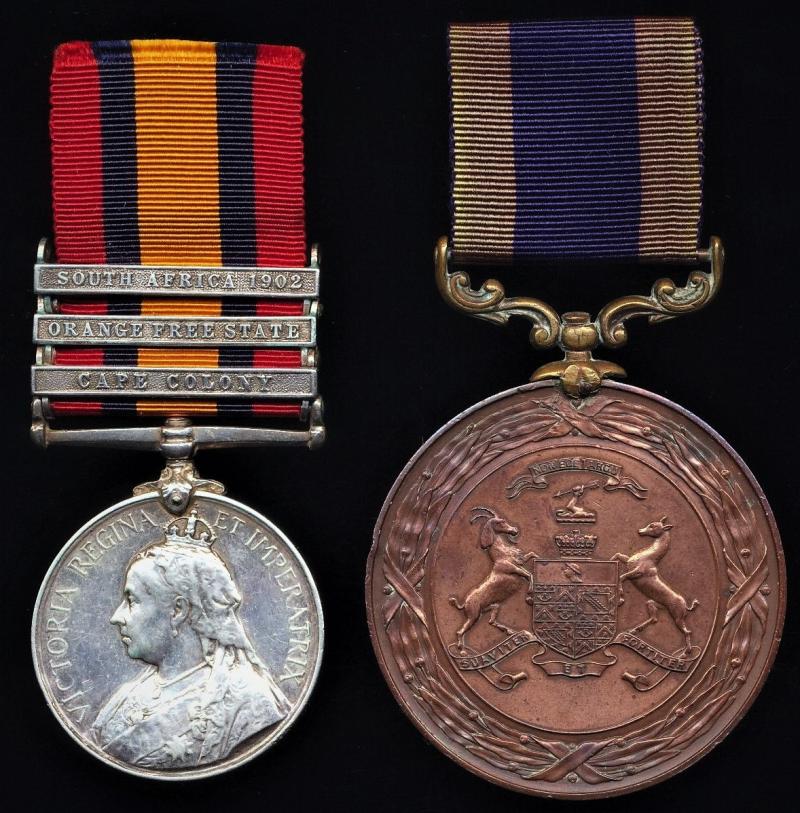 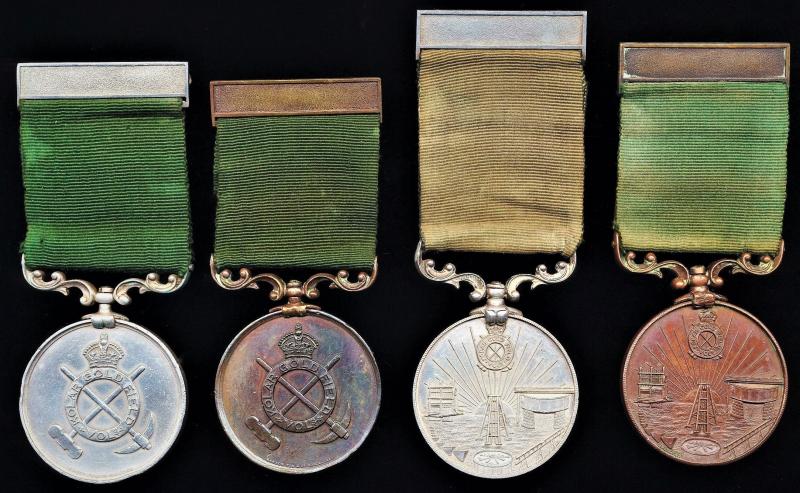 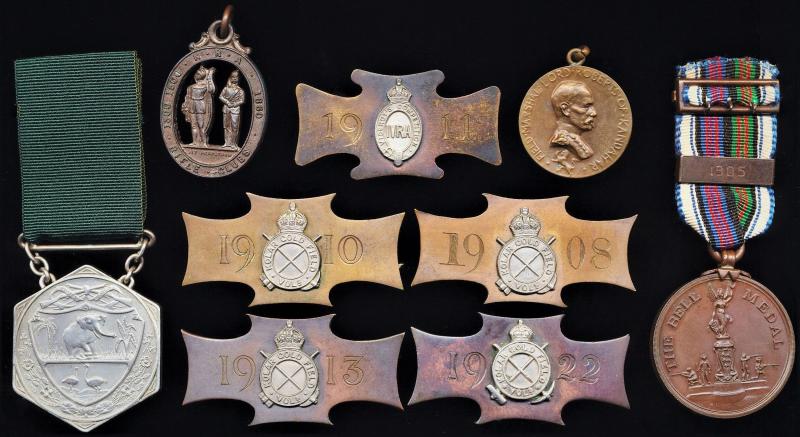 Important: The QSA medal and all 3 x clasps verified per the respective campaign medal roll of the 1st King's Dragoon Guards (ref WO 100/112), the respective entry pages being signed at, Potchefstroom, South Africa, on 22 November 1902, and 4 April 1903. The latter roll entry under remarks showing that the recipient had transferred to the 6th Dragoon Guards - The Carabiniers - in which latter unit the recipient held the regimental number '5157'

India v Transvaal Annual Rifle Match: The competition was established in 1905, and was competed annually in India, and Transvaal between volunteer regiments in India and Transvaal (South Africa) respectively. Silver (Winners) and Bronze (Runners Up) medals - struck at the Calcutta Mint - were awarded to the winning and runner-up teams. During the period 1905-1911, the annual competition was won by the below following volunteer regiments;

Hepburn Doig, son of Hepburn Elliott and Ellen Doig, was a native of, Edinburgh, Midlothian, Scotland, where he was born on 25 July 1881. Hepburn enlisted in the British Army on 30 January 1901, for a short service contract of '7 Years with the Colours & 5 Years on the Army Reserve', and on 1 February 1901, was posted to the 1st King's Dragoon Guards at Aldershot, England. Hepburn served in the South African with the 1st King's Dragoon Guards, and remained in South Africa between, 22 March 1902 to 24 January 1903. Hepburn never returned to the United Kingdom, while in the service of the British Army, and from South Africa proceeded to British India from, where he served from 25 January 1903, until the date that he took his discharge from the British Army on 29 January 1909. In India, Hepburn. served with the 6th Dragoon Guards (Carabiniers), which regiment he had transferred to on 6 February 1903. Hepburn was a model soldier, whose conduct was described as 'Exemplary' with no entries for misconduct during his service. The highest rank attained during his service was Lance Corporal. During his service in South India, specifically in Mysore State (at the British Cantonment of Bangalore), Hepburn (25 years) married Elizabeth Maude Davies (17) a Eurasian girl from Kolar Gold Field, the couple being married at Bangalore on 19 September 1906. At the time of his wedding, Hepburn was holding the appointment of 'Lance-Corporal'. Evidently life in India appealed to Hepburn, and after taking his discharge form the British Army, he took up employment working in the Kolar Gold Field of Mysore State, and in which place he became a member of the Kolar Gold Field Volunteers. By 1910, Hepburn was holding the position of 'Cyanide Foreman' (by 1920 he was being described as an 'Amalgamator'), based at, Rogers Camp. Mysore Mine. On 5 June 1910, a son, David Alexander Doig, was born to Hepburn & Elizabeth Doig. Hepburn Elliott Doig, continued to work in India through the 1920's, but is recorded to have re-located to New Zealand by the time of the Second World War. Hepburn Elliott Doig, died at Motueka, Tasman District, Tasman, New Zealand, on 23 May 1967, where he is buried, and where a memorial plaque commemorates his military service in the South African War

A very scarce grouping to a Scottish expatriate volunteer in the Kolar Gold Field, that includes a 'Best Shot' medal presented by the Viceroy of India, and multiple awards for shooting excellence at international, national (India) and regimental level