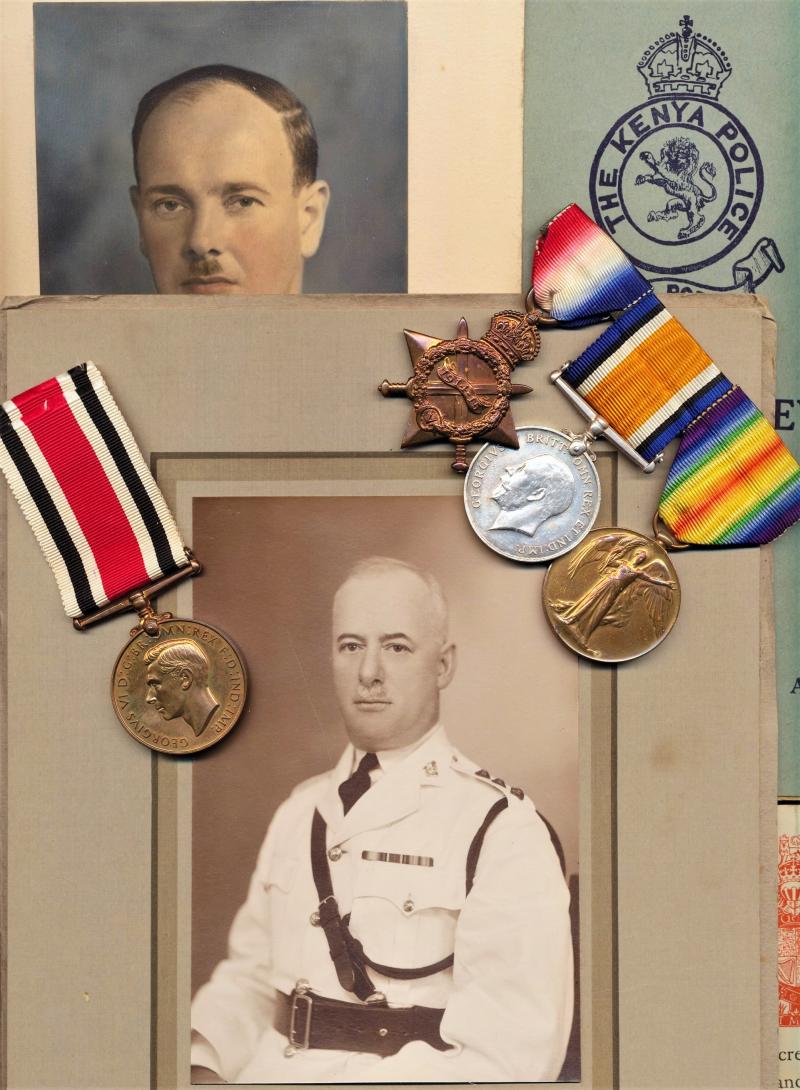 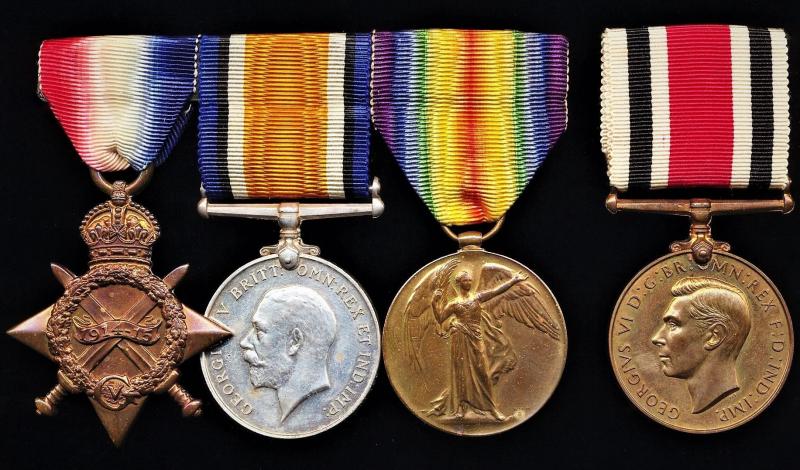 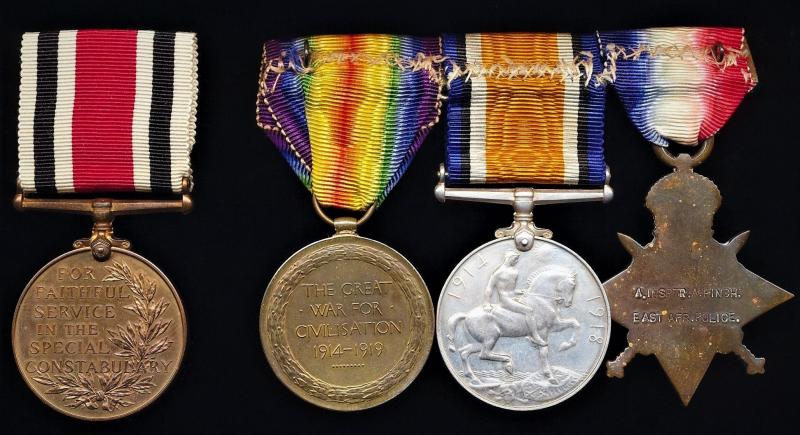 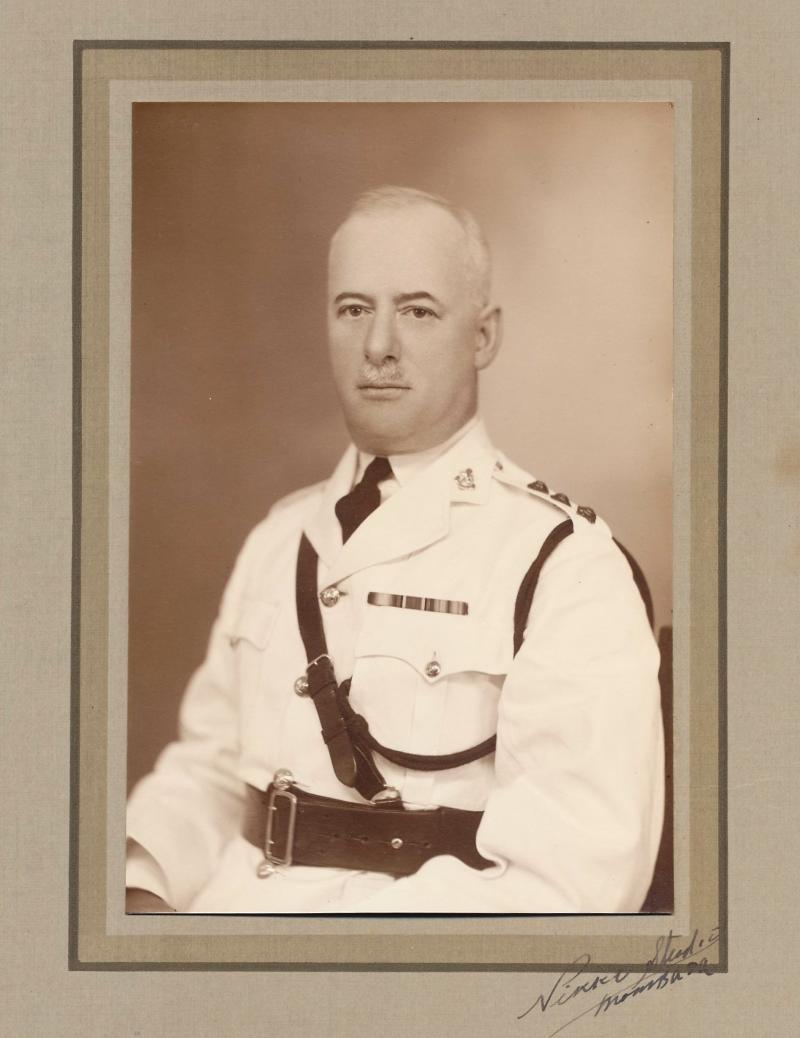 Note: Single last letter only of rank on 1914-15 Star overstruck - and exactly as issued

Important: The 'Summary Sheet' for the respective medal roll (ref WO 329/2939) of the 1914-15 Star for the East Africa Police, shows that 81 x medals were claimed, of which only 57 x medals were issued, with the balance 24 x medals not to be engraved - and consequently a rare to unit medal issue

Sold together with below following original ephemera:

- Tinted portrait of recipient in uniform circa 1914
- Portrait photograph in Kenya Police uniform with ribands up
- Copy of the Kenya Police Review, August 1935 ils
- Home Office letter for award of the Defence Medal (medal not in lot)
- Transmittal letter pertaining to the Special Constabulary Medal

Mr. Finch has during his service been posted at most of the stations in Kenya, which include, Molo, Londiani, Nairobi (twice), Nakuru, Kisumu, Mombasa (twice), Lumbwa, Fort Hall, Kitale,, and Kyambu.

Albert Finch, son of Alfred Finch (Goods Guard London & North West Railway) and Mary Anne Finch (nee Simner) was a native of Rugby, Warwickshire, England, where he was born on, 30 September 1885. Albert was the youngest of child of his parents, and grew up with 4 x older siblings, comprising, brothers, Joseph & Alfred, and sisters, Sarah & Dorcas. Extant military service records held at The National Archives record that Albert first enlisted in the British Army at the age of 16 yeas & 6 months of age, as a 'Boy' soldier, when on, 23rd April 1902, at Rugby, Warwickshire, England, he joined-up for 12 Years 'With The Colours' for service with 'Dragoons of the Line'. At enlistment he was described as being a 'Musician' by trade. Albert was subsequently posted to the 3rd Dragoon Guards, which regiment he joined at Curragh, Ireland, on 26 April 1902. Albert's first period of military service was, in the vent, destined to be a short one, as only 49 days service he was discharged 'Not Likely to become an efficient soldier'. At enlistment Albert cited his father as his notifiable next of kin, who was then resident at, 14 King Street, Rugby, Warwickshire,. His service papers also show that his elder brother Joseph Finch was already a serving soldier with the 3rd Dragoon Guards (later transferring to 5th Lancers). Evidently keen on uniformed service, Albert, then attested as a volunteer in his local Militia battalion, when on, 15 January 1904, at Warwick, England, he enlisted in the 6th (Militia) Battalion Royal Warwickshire Regiment, at which time he was described as having been employed as a 'Labourer', and with prior service in 3rd Dragoon Guards.

Albert's elder brother Joseph, a military bandsman, served in the South African War with 3rd Dragoon Guards. After leaving the British Army, Joseph took up an appointment in British East Africa, where he served with the East African Police (later Kenya Police) and the Kenya Prisons service. Like his younger brother, Joseph had a long and distinguished service n Kenya Colony, in which place he served 21 years, including service in the East African Campaign during the Great War. Joseph retired to his hometown of Rugby, in which place he was a stalwart of the local Royal British Legion and other veterans associations (the Rugby Advertiser issue of 25 June 1937 refers)

While serving as Inspector in Charge of the Nairobi Police Station in 1922, Albert, found himself as the unenviable position of having to thwart - by use of considerable force - one of first, if not the very first, Kenyan nationalist protest during the 'Harry Thuku' riots. Harry Thuku, was the the father of 'Kenyan Naitonalism', and founder of the 'East African Association' (established in 1921)

The colonial Kenyan government was heavily opposed to the association's aims, not least as the settler-dominated colony was not yet ready for any forceful representation of African economic, social and political views, and hence moved to ban national political movements. On 14 March 1922, Thuku was arrested in connection with his political activities. On the two following days, there were demonstrations initiated by Mary Muthoni Nyanjiru to protest his arrest. The first demonstration, on the 15th, passed off peacefully, dispersing after a public prayer for Thuku's safety. On the morning of the 16th, a crowd of 7-8,000 of his supporters gathered around the Nairobi police station - of which Albert Finch was in charge - to demand his release from detention. The police eventually opened fire on the demonstrators, killing at least 25 of them. White civilians joined in the shooting, and may have shot some of the protesters in the back. Thuku was exiled, without charge or trial, to Kismayu in the Northern Frontier Province of Kenya, in present-day Somalia

In 1921, while on home leave from the Kenya Police, Alfred married Winifred Simpson Black, a Scot, whose family hailed from, Mount Pleasant, West Newport, Fife, Scotland. Prior to leaving Kenya Colony, the couple were blessed with a daughter, Margaret Patricia Finch, who was born circa 1934 (she married Robert John Sutherland, in Scotland in 1974). After retiring from the Kenya Police in 1936 after 23 years service in Kenya Colony, Albert returned to the United Kingdom with his wife Winifred S Finch, and daughter Patricia Mary Finch. The 1939 National Register of England 7 Wales, records the family living at, 124 Ashlawn Road, Rugby, Warwickshire, at which time Albert is described as being a 'Retired Supt. Police Kenya' and with notation under the remarks column that he was then serving with the 'Police War Reserve'

Post 1945, Albert Finch is recorded as having returned with his family to Kenya Colony, where he died 'Suddenly' at, Kitale, Kenya on 20 February 1953, and where he was buried at Kitale Cemetery, the following day, 21 February 1953.

An extremely scarce medal group to a colonial police officer, of considerable Kenyan historical interest basis his pivotal role during the repression of the 'Harry Thuku Riots'. in Nairobi in 1922