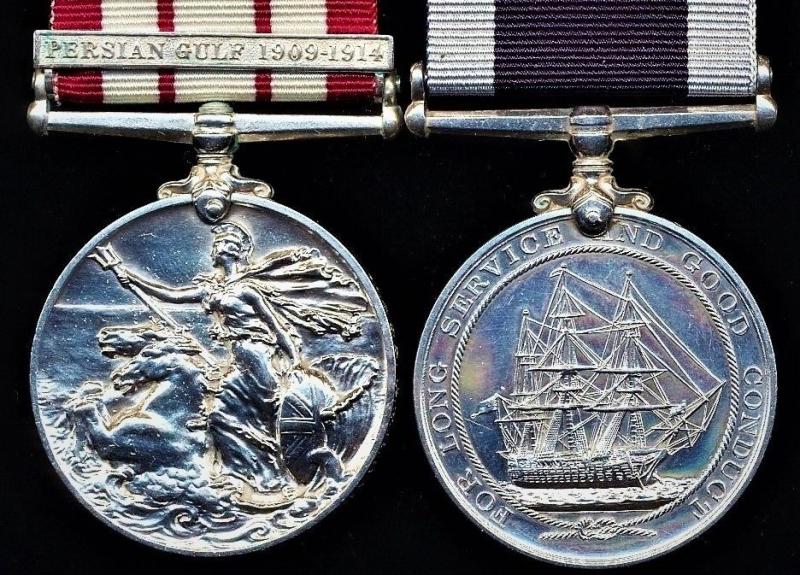 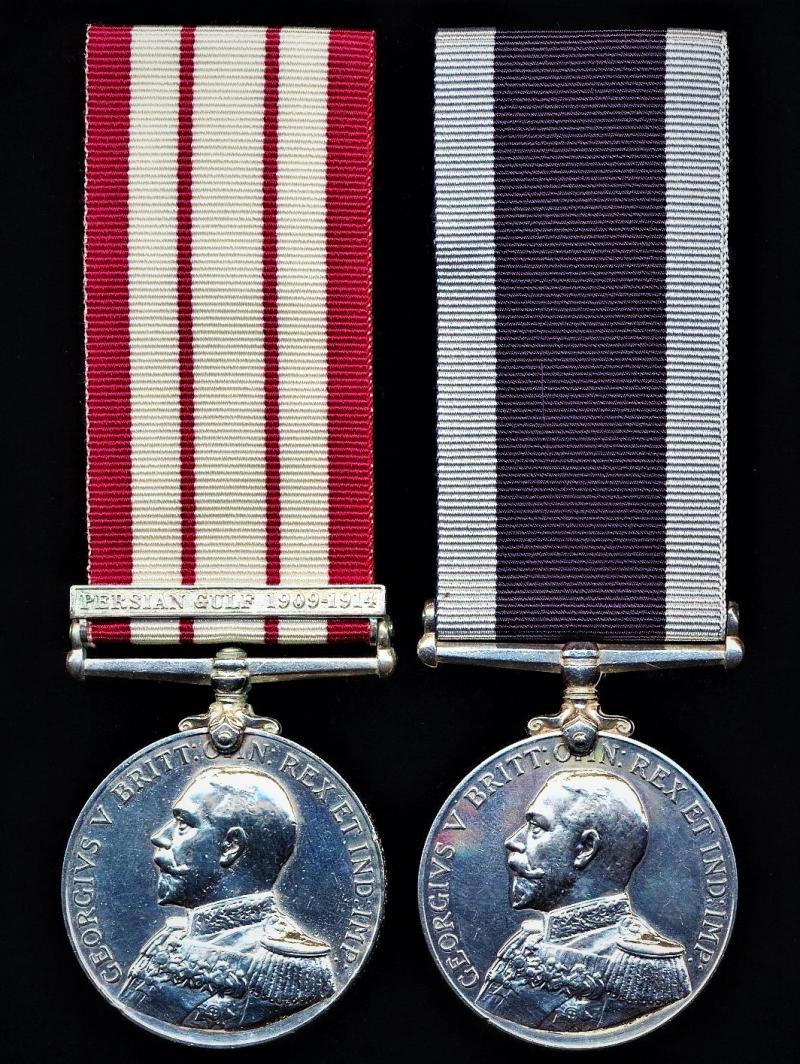 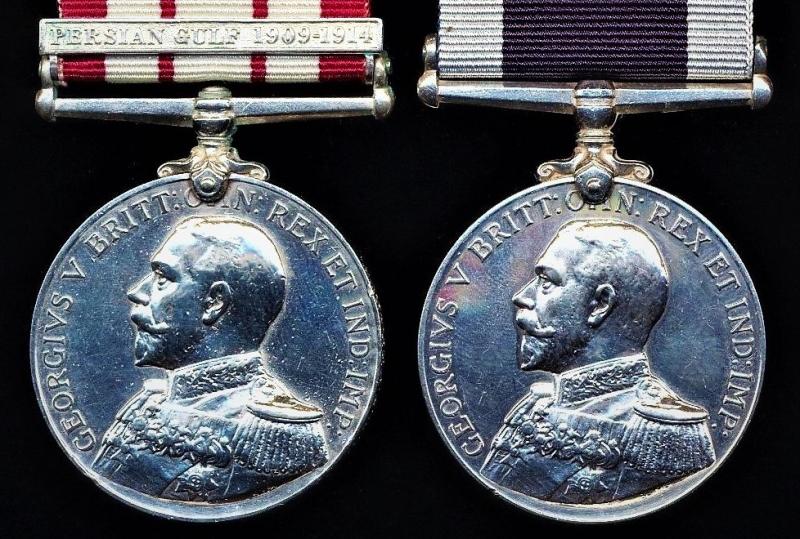 Note: The recipient is also confirmed having been sent a 1914-15 Star trio, (ref ADM 171/95), the Great War medals being sent to him at the shore base H.M.S. Brightlingsea

George Thomas Hopf Baker son of George Thomas Baker (Naval Officer - Gunner) & Sarah Elizabeth Baker (nee Harris) was a native of, Devonport, England, where he was born on 10 January 1887. and joined the Royal Navy as an Acting Engine Room Artificer Fourth Class on 6 October 1908. He served in H.M.S. Perseus from 27 March 1909 to 27 May 1910, on the Persian Gulf Patrol. George married Winifred Bayley, at Erith, Kent, England, on 21 September 1912

George was advanced to Chief Engine Room Artificer on 1 January 1919, he was awarded his Long Service and Good Conduct Medal in 1922. George Thomas Hopf Baker never retired from the Royal Navy - but died 'In Service' when on 9 February 1925 he met a 'sudden death - Suicide By Hanging - in Portsmouth, Hampshire, England, at the young age of just 38 years of age. At the time of his death he had been serving aboard the Royal Navy vessel with 'Pennant' M29

The cited article pertains to the inquest into the 'Suicide' of George Thomas Hopf Baker - and far too long to repeat here. Sadly, George was declared as being of 'Unsound Mind' at the time of his suicide - entirely due to his worrying about being held responsible for perceived poor work he had carried out on the 'Boilers' aboard the Monitor 'M29'. Such was his irrational 'Worrying' that he took his own life

H.M.S. Implacable: Implacable, along with the battleships London, Prince of Wales, and Queen, was detached from the Dardanelles on 22 May 1915 to become part of a new 2nd Detached Squadron in the Adriatic Sea to reinforce the Italian Navy after Italy declared war on Austria-Hungary. Implacable arrived at Taranto, Italy, her base for this duty, on 27 May 1915. In November 1915, Implacable transferred to the 3rd Detached Squadron. Based at Salonika, this squadron was organised to reinforce the Suez Canal Patrol and assist the French Navy in blockading the Aegean coasts of Greece and Bulgaria. She shifted her base to Port Said, Egypt, later that month. Implacable departed on 22 March 1916 for a refit in the United Kingdom, arriving at Plymouth Dockyard on 9 April 1916. When her refit was complete, she returned to the 3rd Detached Squadron and was based at Salonika.


H.M.S. Courageous: Throughout 1917 the Admiralty was becoming more concerned about German efforts to sweep paths through the British-laid minefields intended to restrict the actions of the High Seas Fleet and German submarines. A preliminary raid on German minesweeping forces on 31 October by light forces destroyed ten small ships. Based on intelligence reports, the Admiralty allocated the 1st Cruiser Squadron on 17 November 1917, with cover provided by the reinforced 1st Battlecruiser Squadron and distant cover by the battleships of the 1st Battle Squadron, to destroy the minesweepers and their light cruiser escorts


The German ships—four light cruisers of II Scouting Force, eight destroyers, three divisions of minesweepers, eight Sperrbrechers (cork-filled trawlers) and two other trawlers to mark the swept route—were spotted at 7:30 am.Courageous and the light cruiser Cardiff opened fire with their forward guns seven minutes later. The Germans responded by laying an effective smoke screen. The British continued in pursuit, but lost track of most of the smaller ships in the smoke and concentrated fire on the light cruisers. Courageous fired 92 fifteen-inch shells and 180 four-inch shells during the battle,18 and the only damage she received was from her own muzzle blast. One fifteen-inch shell hit a gun shield of the light cruiser SMS Pillau but did not affect her speed. At 9:30 the 1st Cruiser Squadron broke off their pursuit so that they would not enter a minefield marked on their maps; the ships turned south, playing no further role in the battle.

After the battle, the mine fittings on Courageous were removed, and she spent the rest of the war intermittently patrolling the North Sea. In 1918, short take-off platforms were fitted for a Sopwith Camel and a Sopwith 1½ Strutter on both 15-inch (380 mm) turrets. The ship was present at the surrender of the German High Seas fleet on 21 November 1918.

A fine Naval pair to a senior Petty Officer, from a Naval family, who had served aboard numerous Battleships of the Royal Navy during his long naval career