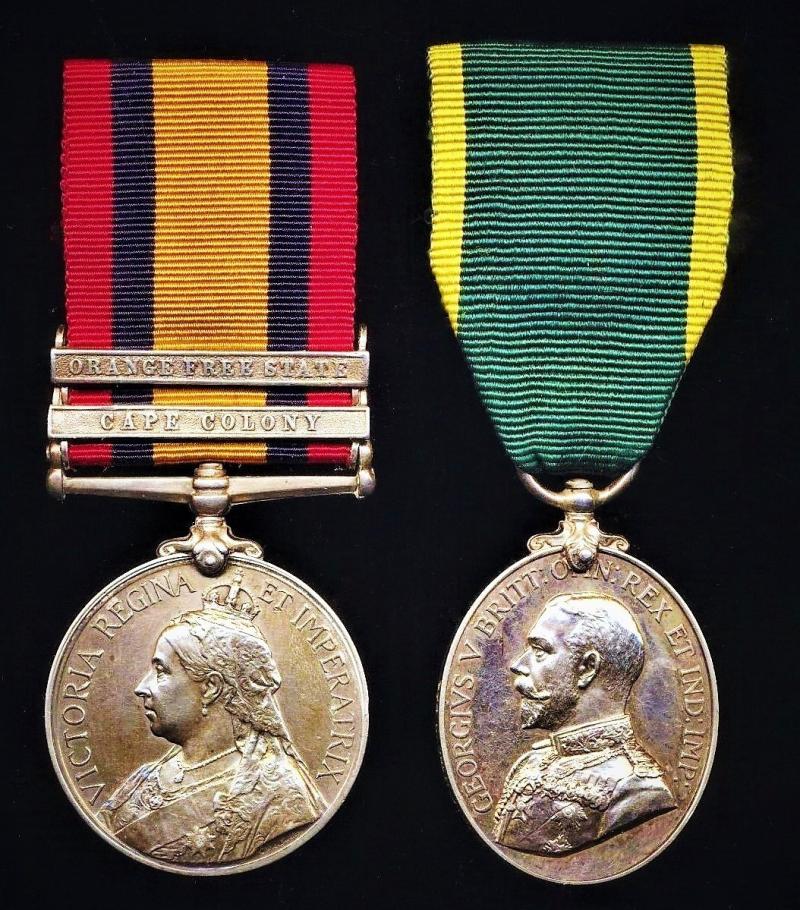 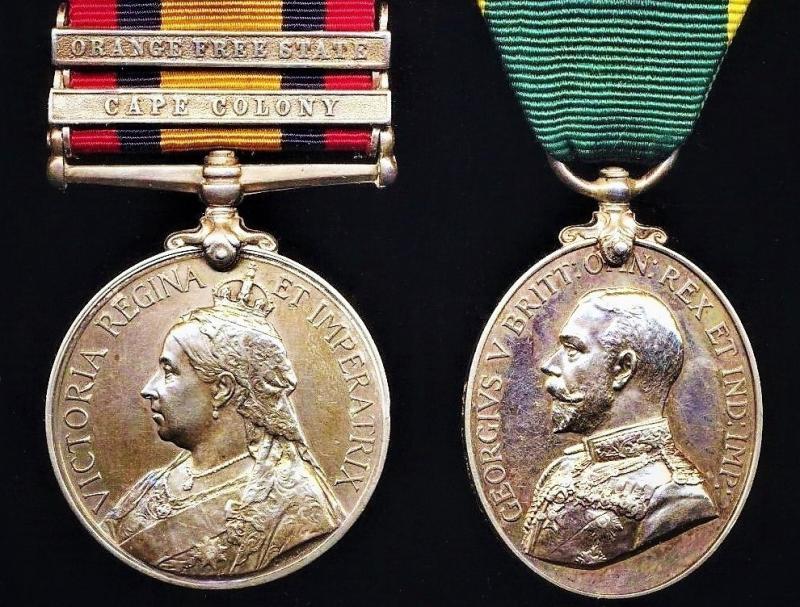 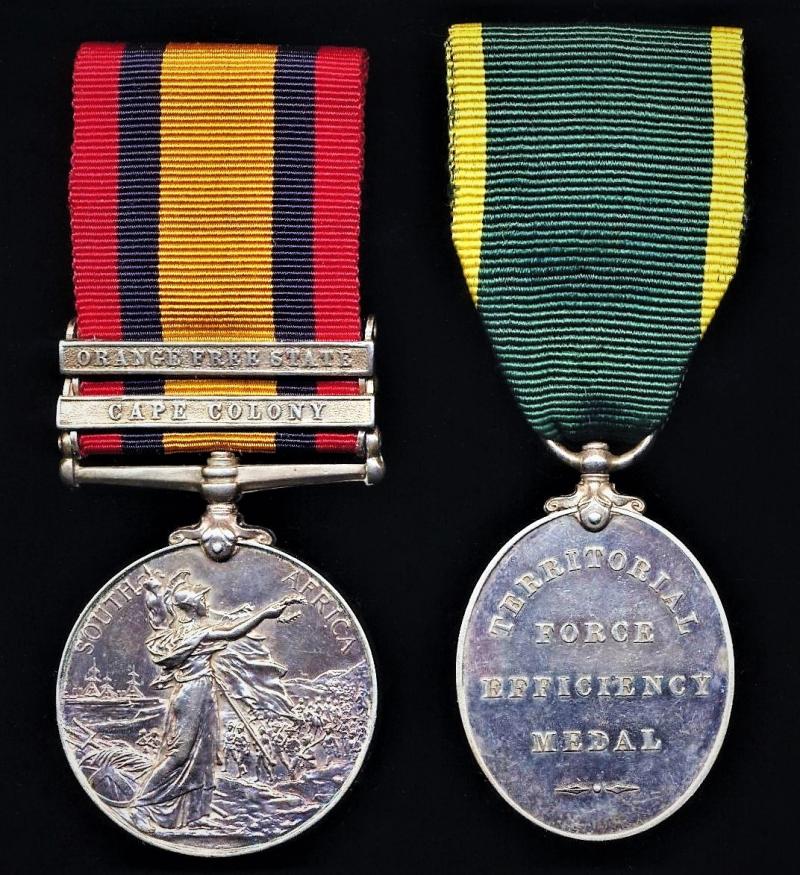 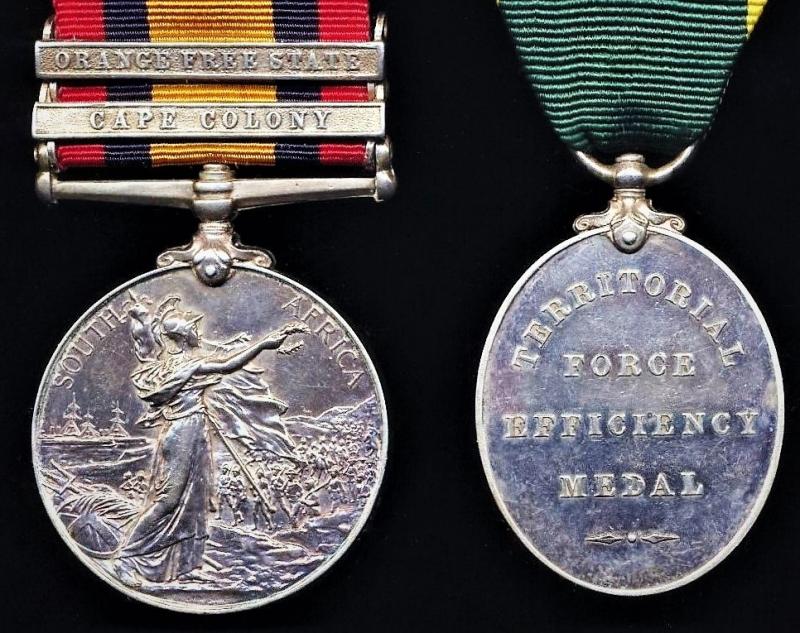 Note: The recipients 3 x digit number on the TFEM indicates an early original muster in the Buckinghamshire Battalion, Oxfordshire and Buckinghamshire Light Infantry, to a volunteer who had prior to 1908 served in the Volunteer Force, and was allocated a new number on the creation of the Territorial Force in 1908

Important: Both medals & all clasps verified on the campaign medal roll of 2nd Battalion Royal Berkshire Regiment and the respective Army Order authority:

Richard James Hawthorn (sic Hawthorne), son of Robert Hawthorn (a Brewers Labourer) & Frances Mary Hawthorn (nee Edey) was a native of, Clewer, Berkshire, England, where he was born circa 1882 (he was baptized on 24 September 1882). A keen 'Volunteer' Richard was already a serving volunteer in the 1st Volunteer Battalion of the Royal Berkshire Regiment, when he enlisted in the British Army on a short 'One Year Engagement', at, Reading, Berkshire, England, on, 4 March 1901. Richard joined the Volunteer Service Company of the Royal Berkshire Regiment that embarked for overseas active service in South Africa, on, 30 March 1901. He served in South Africa attached to the 2nd Battalion Royal Berkshire Regiment, through to, 18 June 1902, his service papers (held and accessible at The National Archives) showing that he was awarded the QSA Medal with 2 x clasps for Cape Colony & Orange Free State. Not long after returning from the South African War, Richard married, Ethel Joyce Allen, at, Slough, Berkshire, on 12 November 1904. The 1911 National Census for England & Wales, records him living with his wife at his father-in-law's residence located at, The Cylindrics, Ledgers Road, Slough, and employed as an 'Engine Fitters Labourer '. In the same period 1910-1912, the Windsor and Eton Express & other local papers carried numerous notices pertaining to Richard's service as a Lance Corporal in "E" Coy Buckinghamshire Battalion, Oxfordshire & Buckinghamshire Light Infantry. During the Great War, Richard, enlisted in the British Army at Reading, Berkshire, on 19 March 1915, described as a 'Fitter' by trade, he was posted to the 39th Divisional Signals Company (Reading) Royal Engineers. Richard's service was, however, curtailed very soon after his enlistment, when he was discharged from the British Army on 2 May 1915, having been found to be medically unfit for further military service. Richard did not serve overseas during the Great War, and was not awarded any Great War medals. Richard James Hawthorn is recorded as having died in Buckinghamshire, England, sometime during the last quarter of 1917

An uncommon combination of medals / clasps for pre 1914 'Volunteer' soldiering.