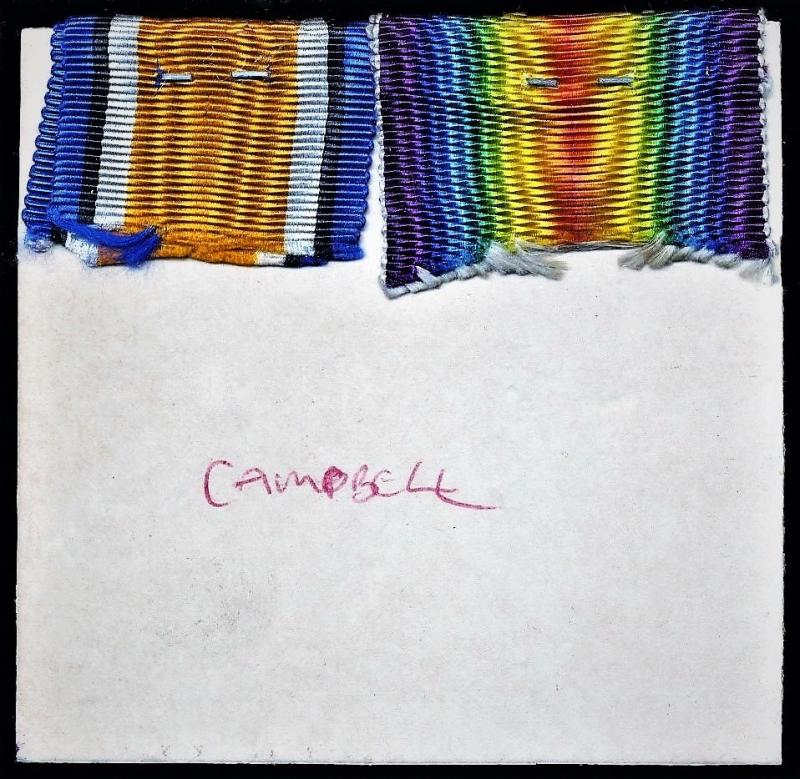 Medal Verificiation: Both medals verified as the recipients full medal entitlement for the Great War per the respective campaign medal roll of the Black Watch (ref WO 329/1356) that was compiled and signed at, Perth, Scotland, on, 5 November 1920 1921.

James Campbell, grandson of Mungo Campbell (a Gardener's Labourer) & Catherine Campbell, was a native of, Moulin (Killiecrankie), Perthshire, Scotland, where he was born in 1893. At the time of the compilation of the 1901 National Census for Scotland, James, described as a 'Scholar', is recorded as living with his grandparents, and 3 x cousins at, West Faskally Cottages, Moulin (Killiecrankie), Perthshire, Scotland. By the time of the 1911 National Census for Scotland, James, then 17 years of age, is recorded as living in Moulin (Killiecrankie). During the Great War, James served with several battalions of his local regiment. Specifically the Great War Medal Rolls, shhow in sequence that James Campbell, first first entered theatre of war 'France' holding the regimental number 4605 while serving with the 6th 'Perthshire' Battalion Black Watch (Royal Highlanders) Territorial Force. James was later transferred to 4/5th Battalion Black Watch, in which he held regimental number 6438, and finally re-posted back to the 6th 'Perthshire' Battalion Black Watch (Royal Highlanders), having a 'third' regimental number, viz 202330. In 1917, during the Battle of Arras, John Campbell was initially posted 'Wounded', later changed to 'Wounded & Missing', then 'Presumed Dead', before being recorded as officially 'Killed-in-Action' on 23 April 1917. His soldiers effects were sent to his widow, Janet McRae Campbell (nee McGregor, who he had married at Dennistoun, in 1915), whose Post-War pension claims show her initially residing at Balgowan, Perthshire. A second post-war pension claim, shows that the widow had re-married and was latterly naamed Janet McLaughlan (she had married William McLaughlan / McLauchlan at Dennnistoun in 1915).

The body of James Campbell was never recovered form the battlefield of Arras. However, his supreme sacrifice is commemorated in perpetuity by the Commonwealth War Graves Commission where his name and service details are inscribed on a panel of the Arras Memorial, in Arras, France. The Arras Memorial commemorates almost 35,000 servicemen from the United Kingdom, South Africa and New Zealand who died in the Arras sector between the spring of 1916 and 7 August 1918, the eve of the Advance to Victory, and have no known grave. The most conspicuous events of this period were the Arras offensive of April-May 1917, and the German attack in the spring of 1918

Tenandry Parish WW1 War Memorial: A bronze tablet held in the Tenandry Kirk contains the names of the 13 x men of the parish (located near Killiecrankie) who lost their lives in the Great War. Of the 13 names engraved thereon, were 3 x Officers, & 10 x 'Other Ranks', which latter included no less then 7 x men of the Black Watch