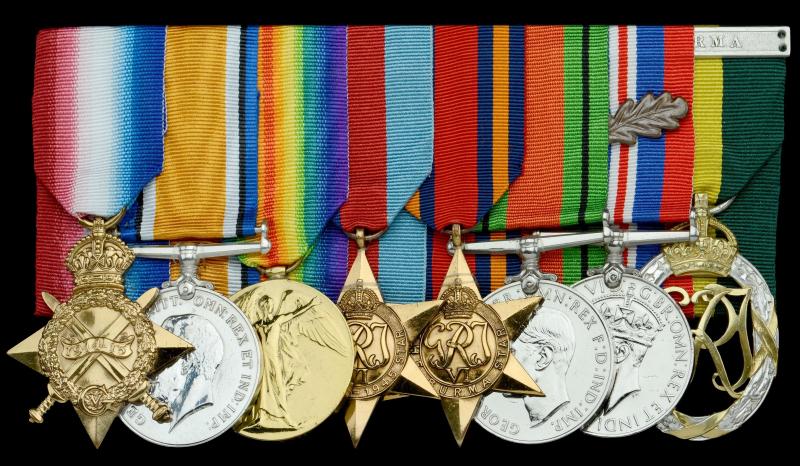 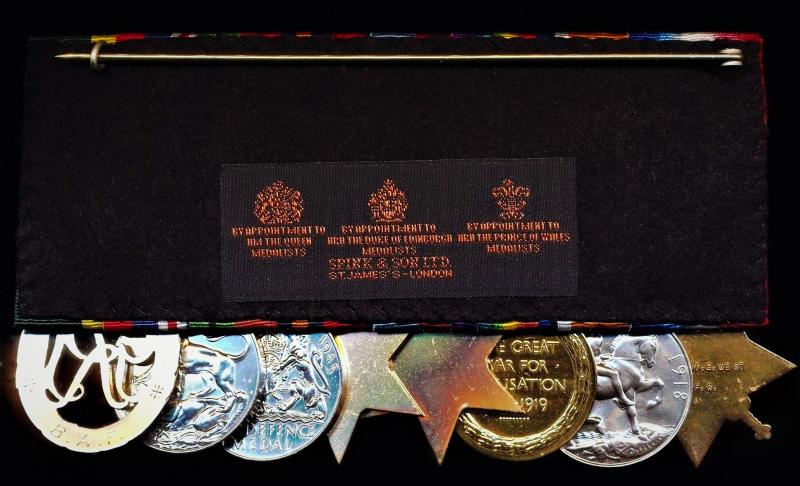 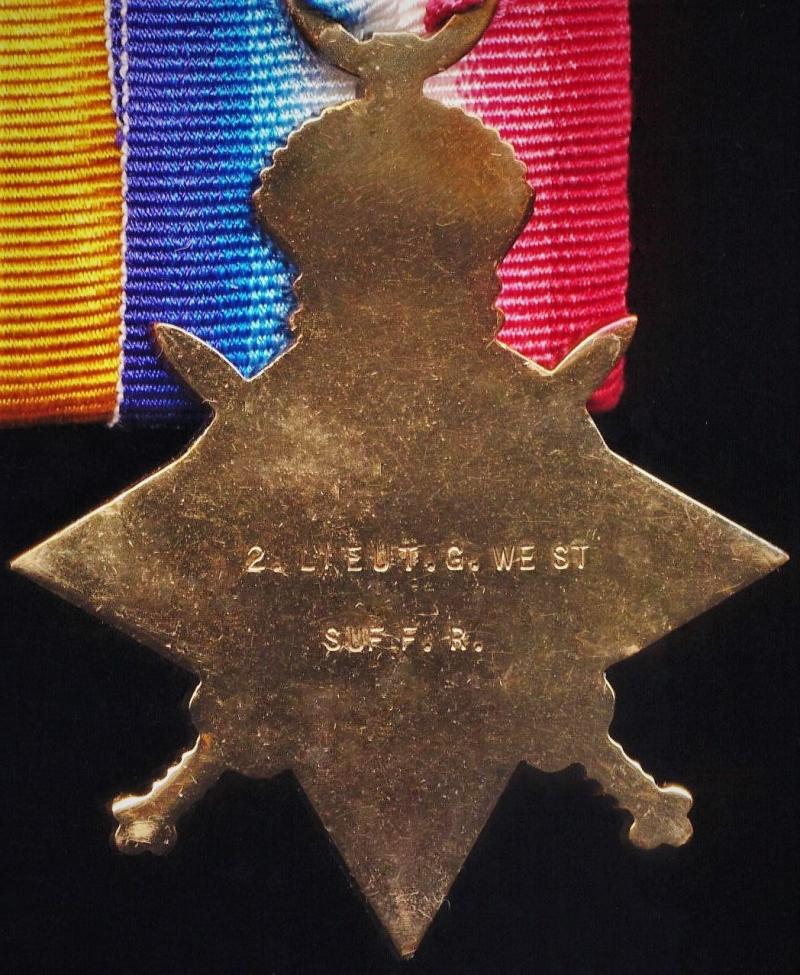 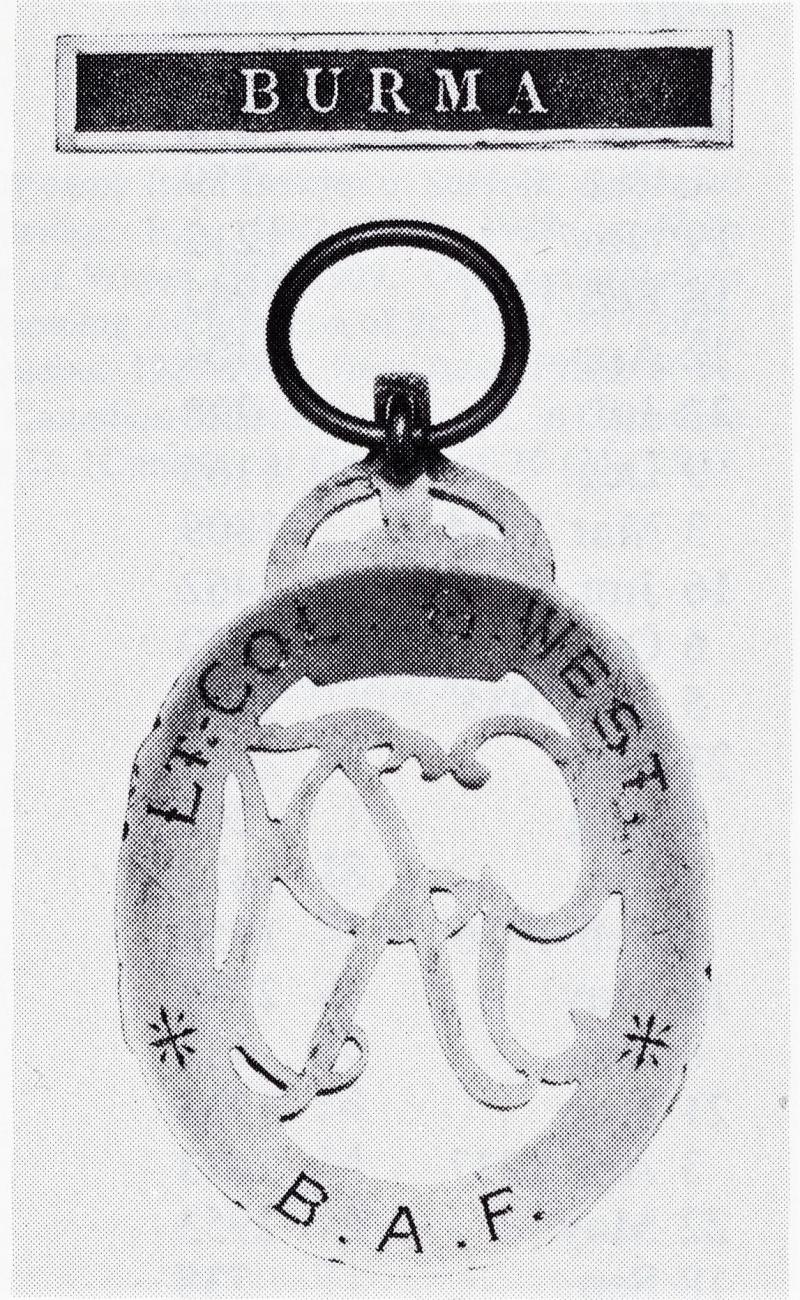 Note: The Efficiency Decoration with officially engraved naming on reverse. The integral 'Burma' top bar on the ED adapted to facilitate professional court mounting, by 'Spink'

Trench Raid & Capture of Enemy Flag: Reference The History of the Suffolk Regiment 1914-1927 (Murphy, 1928) the below following relates to a Trench Raid led by Lieutenant West:

On August 24 a patrol from "D" Company went out before dawn and secured a flag which the enemy had carefully fixed in a position on their parapet. The next day another was put up in its place, but this was also acquired by a patrol under Lieit. West.

Important: The award of a Mention-in-Despatches to Lt-Col G. West of the Burma Auxiliary Force, was published in the London Gazette issue of 17 August 1946, the preamble to the award stating:

The KING has been graciously pleased to approve that the following be Mentioned in recognition of gallant and distinguished services in Burma :-

Undoubtedly other awards of the ED 'Burma' were made - but not traced as gazetted - including this officially named example to Lieutenant-Colonel George West of the Burma Auxiliary Force. Another 2 x Officers believed to have been awarded the ED 'Burma', are Lt-Col W. MI. Hodge, E.D.. & 2nd Lieutt R.O.B. Perrott, O.B.E., E.D.

Provenance: The medals formerly in the collection of the late Major J.M.A. Tamplin, O.B.E., T.D., sometime Director of the National Army Museum, London, and author of the book 'The Efficiency Decoration Instituted 1930 (J.M.A. Tamplin, 1987), in which reference source the author has published the image of the E.D. awarded to George West, to illustrate the official naming of the medal (we have attached a copy of that image with this listing for illustrative purposes)

George West son of Francis George West (1865-1900) and Mary Kathleen West (nee Capell) was a native of, Pettistree, Woodbridge, Suffolk, England, where he was born on 18 September 1894. George's father, Trooper George West, 67th (Sharpshooters Company) 18th Battalion Imperial Yeomanry, died of enteric fever, at Mafeking, Bechuanland, South Africa, on, 22 October 1900, during the South African War. George had one younger sibling, Madeline West (1897-1984). By the time of the 1911 National Census for England & Wales, George is recorded described as a 'Student' residing with his paternal Aunt, Frances Sarah West (of private means) at, 15 Eton Road, Hampstead, London. He was granted a commission as a 2nd Lieutenant in the 3rd Battalion Suffolk Regiment, Special Reserve of Officers, on 7 October 1914. Serving with the 1st Battalion on the Western Front, he was promoted to Lieutenant in October 1915, Captain in September 1916, and Temporary Major and an Acting Lieutenant-Colonel in December 1917. West relinquished his commission on 1 April 1920, and was granted the rank of Major

Circa 1924, George West relocated to Burma, where he was variously employed in the Burma Civil Service. In 1924 he is shown on passenger shipping manifests bound for Rangoon, Burma, described as a 'Forests Officer' - and almost invariably working on the management of the great 'Teak' forests in Burma. By 1932, he was employed with the Burma Medical Services in an administrative capacity, located in Mandalay. He was appointed Secretary of the General Hospital at Mandalay in February 1939. On 8 June 1930 he was granted a commission as a Lieutenant in the Upper Burma Battalion, Auxiliary Forces India. He attained the rank of Lieutenant-Colonel in September 1938. On active service during the Second World War, he was mentioned in despatches for his services in Burma (London Gazette 19 September 1946). For his service in the Burma Auxiliary Force he was also awarded the Efficiency Decoration (Burma) though his award has not been traced in the Burma Gazette.

George West returned to Burma post-war, and is recorded working there at least through to 1958, where at the age of 66 years, he was described latterly as employed as a 'Planter'

Sold together with a quantity of photocopied research compiled by the late Major J.M.A. Tamplin, M.B.E., E.D.

The medals professionally court-mounted by 'Spink of London. The reverse of the medal mounting bar with 'By Appointment' labels to the Royal Family & retaining its original long stout pin and clasp fittings