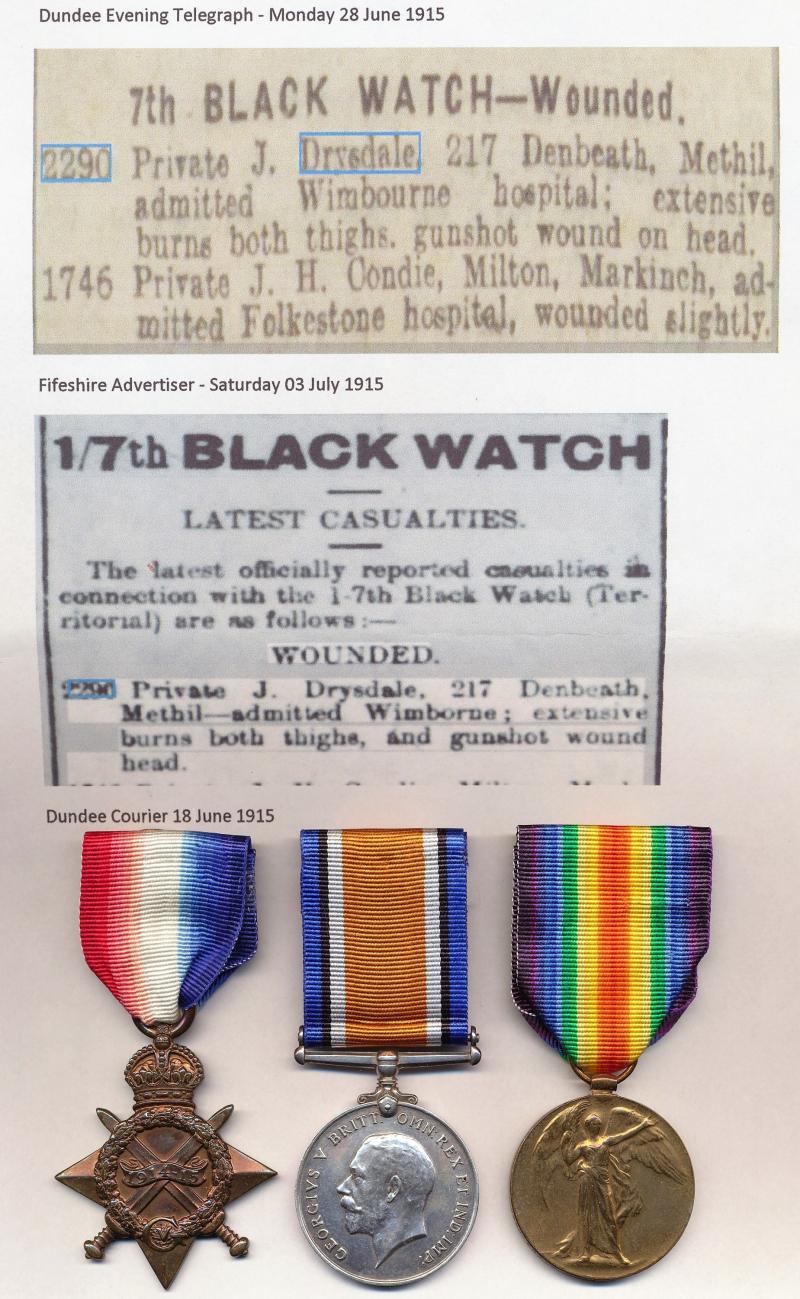 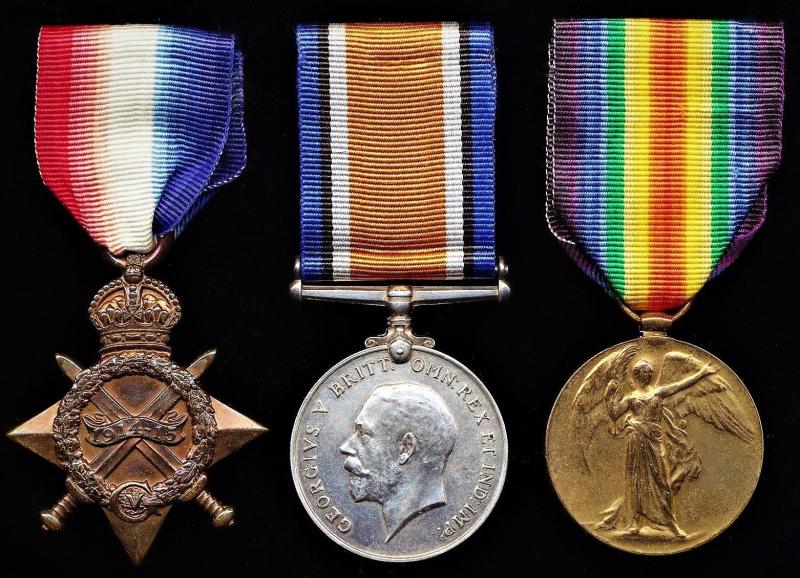 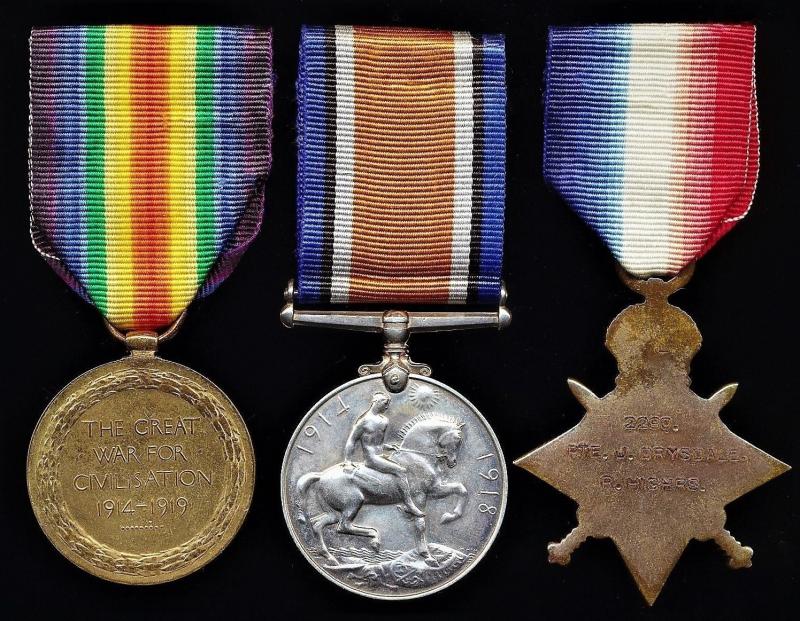 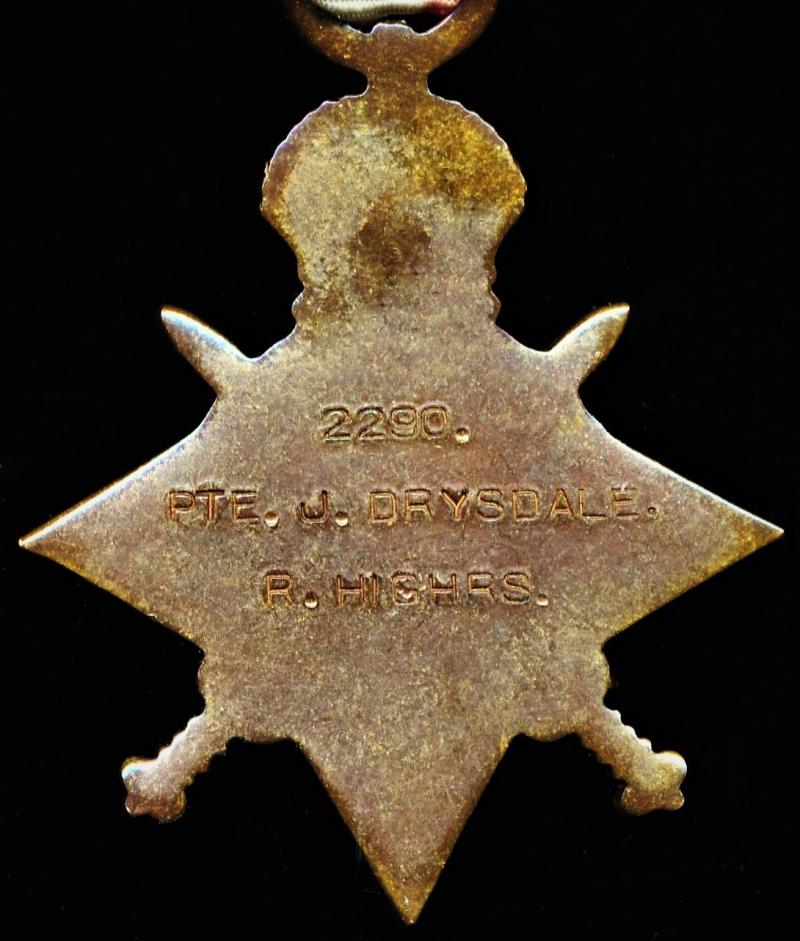 Severely Wounded-in-Action: : Private (later Sergeant) James 'Jimmie' Drysdale 7th Battalion Royal Highlanders (Black Watch) is confirmed having been wounded by Gunshot & Shrapnel, or GSW, to 'The Head' on the Western Front on, 5th June 1915. At which time he had been serving as 'Orderly' to Captain Forbes Thomson Wallace of 7/Black Watch - the Fifeshire Battalion of the Black Watch

The Fifeshire Newspapers of 1915 included the below following articles pertaining to Private Drysdale.

In a letter to his parents at Denbeath, Methil, Lance-Corporal John Tully, 7th Black Watch, says:- "We had a good few casualties, but of course that is all in the days work. Joe M'Gill and Jimmie Drysdale are in hospital. We were in the reserve trenches when Joe was struck. He was getting in a trench when a 'Jack Johnson' burst. He felt a pain in his side, but thought a clod of earth had struck him. On taking out his pocket-book, however, he found that a piece of shell had pierced it right through. He got off with two broken ribs. Drysdale was struck by a piece of shrapnel, but I don't think he is badly hurt."

Lance-Corporal Tully's article at best reflects a case of master understatement, or he just did not know the full extent of Private Drysdale's actual wounds - which were so severe (GSW to head and burns to both thighs) to warrant an immediate evacuation back to England for treatment.....

Admitted to Wimborne Victoria Hospital, Private James Drysdale, 217 Denbeath, one of the 1/7 Black Watch, is suffering from extensive burns on both thighs and gunshot wound on the head. He was Orderly to Capt. F.T. Wallace. Private Drysdale who was one of the intelligent youths looking after Denbeath Star A, does not say how he came by the burns. His last letter says he was beside Joe M'Gill in the reserve trenches when the latter was wounded. Drysdale was struck by a piece of shrapnel, but I don't think he is badly hurt."

Medals Verification: All medals verified as entitled & issued per the respective Great War medal rolls of the Royal Highlanders (Black Watch) as under:

James Drysdale, son of James Drysdale (a Coal Miner) and Isabella Drysdale (nee Cunningham) was born in Airdrie, Lanarkshire, Scotland, on 1896. At the time of the 1901 Census for Scotland, James is recorded as living at the family home, located at, 65, Forrest Street, New Monkland, Lanarkshire, Scotland, with his parents and younger brother George Drysdale (b. 1898). Sometime after 1901, the family relocated to Denbeath, Methil, Leven of Fife, Scotland, where the father was later joined by his sons working together as Coal Miners

During the Great War, James is recorded as having first entered theatre of war 'France' on, 2 May 1915, on which date, James landed in France together with the rest of his battalion, 7th (Fife) Battalion Royal Highlanders (Black Watch) Territorial Force. On 5 June 1915, James was severely wounded in action and evacuated to England as a consequence of his wounds. Albeit his wounds were serious, James was able to make sufficient recovery to be able to be returned to front-line service with the British Expeditionary Force. In total, James served 3 x tours of duty in France & Flanders during the Great War, his service postings summarised below:

Sometime after returning to France later in the War, James served in other battalions of the Black Watch, in order 9th (Service) Battalion Royal Highlanders (Black Watch) during which time he was allocated a new regimental number, viz 290499 and lastly served with the 4/5th (Territorial Force) Battalion Royal Highlanders (Black Watch). While serving with 9/BW James Drysdale was promoted to, Corporal, on, 22 January 1918, and to, Sergeant, on 23 August 1918. Sergeant Drysdale was disembodied from the British Army on, 15 January 1919. Post war, James Drysdale returned to, Denbeath, Methil, Leven, Fife, where he became the Honorary Secretary of his local branch of the Leven and District Black Watch Association