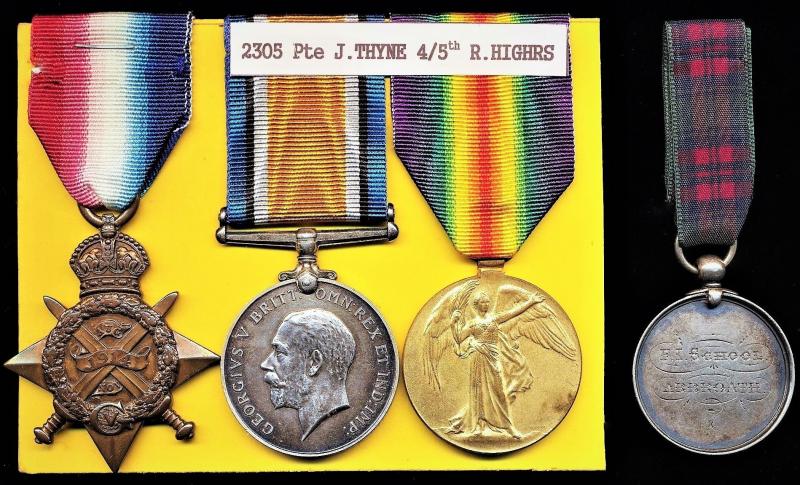 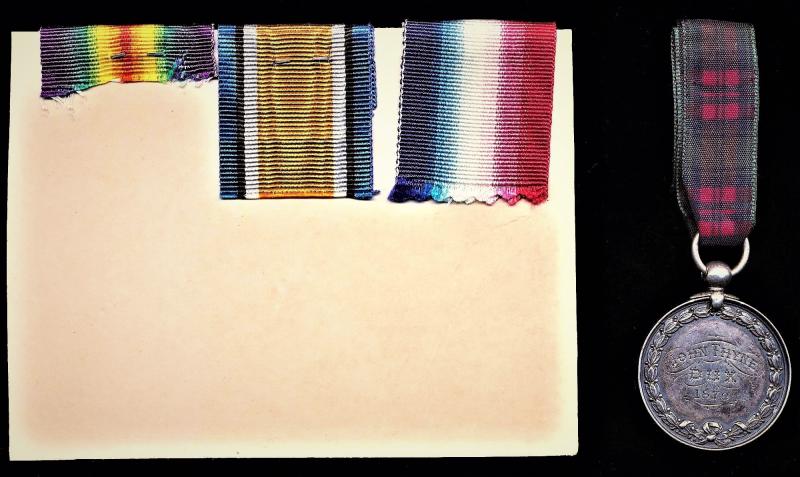 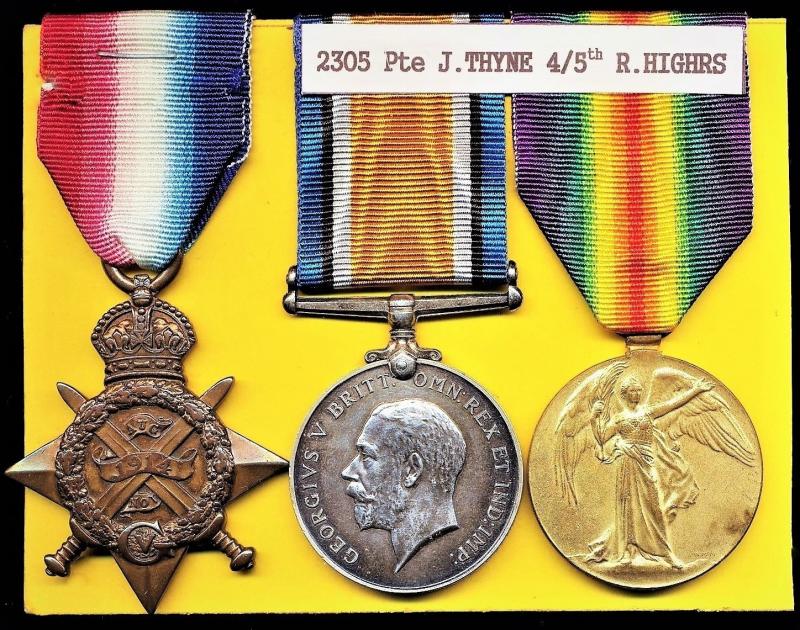 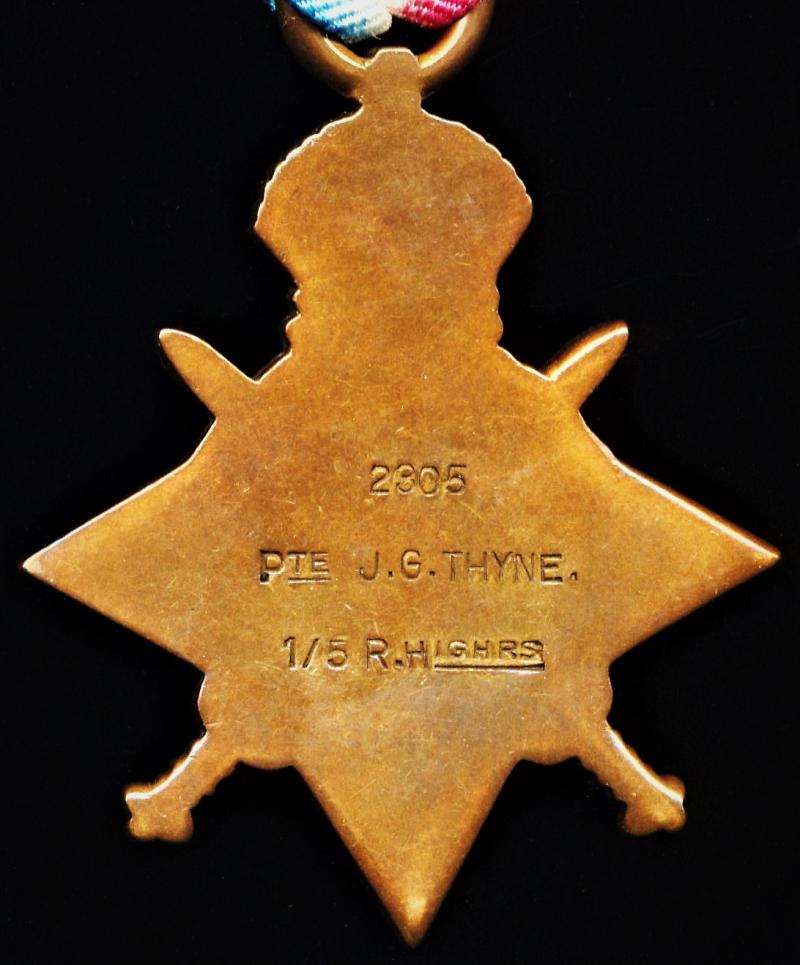 Sold together with the,'School Dux Medal', awarded to the recipient's father in 1870 by the Free Church Educational Institution School, Arbroath, Scotland:

Casualty: Lance-Corporal John Thyne, is confirmed having been Wounded-in-Action' (GSW to Leg) on 11 May 1915, while serving with 1/5th Battalion Black Watch in France

Verification: All medals verified as entitled & issued per the respective Great War medal rolls of the Royal Highlanders (Black Watch) as under:

John George Fleming Thyne, son of John McLaren Thyne (Steam Engine Fitter) & Christina Thyne (nee Fleming) was a native of Arbroath, Forfarshire, Scotland, where he was born sometime in October 1888. John enlsited in the Territorial Force of the British Army shortly after the outbreak of war in August, 1914. Together with former schoolmates - referred to as the Arbroath High School Section - he enlisted in the local Territorial Force infantry battalion, viz 1/5th (Angus and Dundee) Battalion Black Watch (Royal Highlanders). He is confirmed as having first entered theatre of war, 'France' on 1 November 1914. The Thyne family were well known in Arbroath, with young John being a prominent team member of the local Arbroath United Cricket Club, and as evinced by the below following article that was published in the 'Dundee Evening Telegraph', issue of, 13 May 1915;

A well-known Arbroath member of the 5th Black Watch has been wounded.

Mr and Mrs John M Meffan, Nolt Loan Road, haver received intimation that their nephew, Lance-Corporal John G. Thyne, has been wounded in the leg, and that he is now at hospital in Cardiff.

Lance-Corporal Thyne was out with a working party about midnight last Tuesday week, cutting barbed wire in front of the trenches, when he was struck. He joined the High School Section of the 5th Black Watch after the outbreak of war, and was formerly a well known member of the Arbroath United C.C. He was employed in peace time in the office of Messers, Corsar Bros., Arbroath

The Arbroath 'High School Section' of the 5th Black Watch referred to 28 x men who embarked for France in October/November 1914, By the 9th May 1915, only 7 x 'All-Ranks' survived unscathed (Arbroath Herald and Advertiser for the Montrose Burghs 18 June 1915refers). The 'High School Section' having in that time suffered 7 x killed or died in action; 10 x wounded in action (including John Thyne), 4 x invalided home due to ill-health

Notwithstanding, the recipient having been wounded and survived the ordeals of the Great War, and sadly losing his only son, to death in combat, in 1945, the 'Thyne Family' themselves narrowly escaped death in September 1941, when their house was 'Bombed'

Damage by Bomb at Monifieth

Mrs Thyne, wife of Mr John G. Thyne, textile salesman, 162 Ferry Road, Monifieth, had an alarming experience yesterday when a smoke bomb was dropped through the roof of her house. It tore a hole in the roof of the villa, knocked a hole in another wall between a bedroom and the bathroom, and landed, smoking, on a chest of drawers that it smashed.

"My first thought was to get a stirrup pump," said Mrs Thyne, "but I could not get upstairs owing to the smoke. With the help of some workmen nearby, the bomb was thrown out, and firemen from Broughty Ferry came to deal with it."

The damage included a hole in the roof about four feet square, a hole in the inside wall, and damage to bedroom and bathroom furnishings.

The bomb is believed to have been dropped by a British aircraft out on practise flying.

John George Fleming Thyne is recorded as having died at Monifieth, Forfarshire, Scotland, in June 1959.

He was well known the textile trades in Yorkshire and Dundee.

Mr Thyne served in the Black Watch in the first world war. In the last war he was a Major in the Home Guard.

His only son was killed at the crossing of the Rhine

He retired last year, and would have celebrated his 71st birthday in October. Mr Thyne is survived by his wife.

John Mclaren Thyne, only son of John George Fleming Thyne, was born in Arbroath, Scotland. During the Second World War he served as a trooper in ‘C’ Squadron, 1st Fife and Forfar Yeomanry, Royal Armoured Corps, who as part of the famous 79th Armoured Division and saw action in North West Europe with Churchill Crocodile ‘flame thrower’ tanks. The 79th Armoured Division was commanded by Major-General Percy Hobart and operated a series of armoured vehicles modified for specialist roles. These became affectionately known as ‘Hobart’s Funnies’. Between 29 and 30 March 1945, a troop of Thyne’s unit was fighting in co-operation with the Regina Rifle and Sherbrooke Fusilier Regiments of the Canadian Army to secure the town of Emmerich in the Rhineland of Germany. The Fife and Forfar Yeomanry’s Crocodile tanks were used to good effect against very heavy resistance from the enemy, with the loss of one tank knocked out and two others ditched in shell holes. The tank which was destroyed was commanded by Lieutenant Trevor Walford; John Thyne being part of his crew. Both Walford and Thyne were killed and were originally buried in Germany. Following the end of hostilities, their remains were re-interned in Groesbeek Canadian War Cemetery, Netherlands

Sold together with some hard-copy research