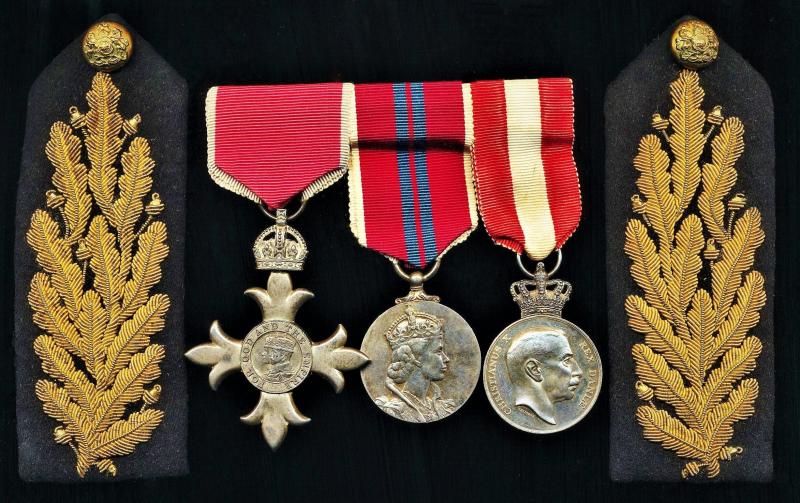 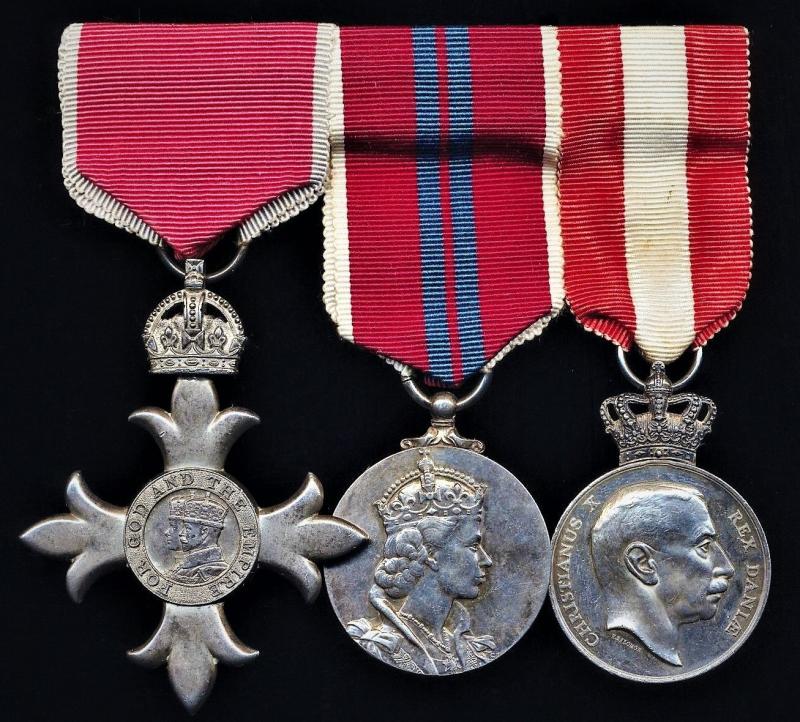 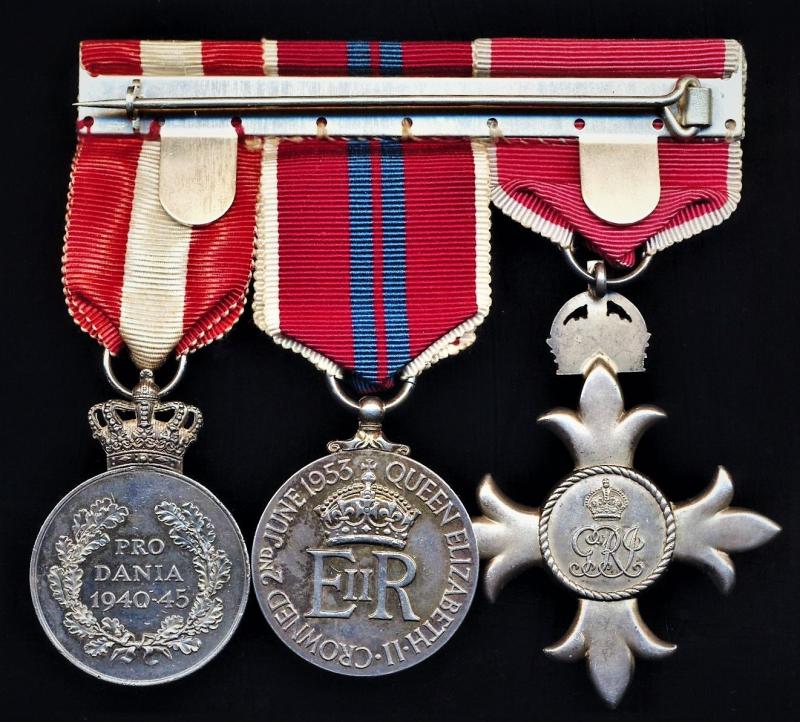 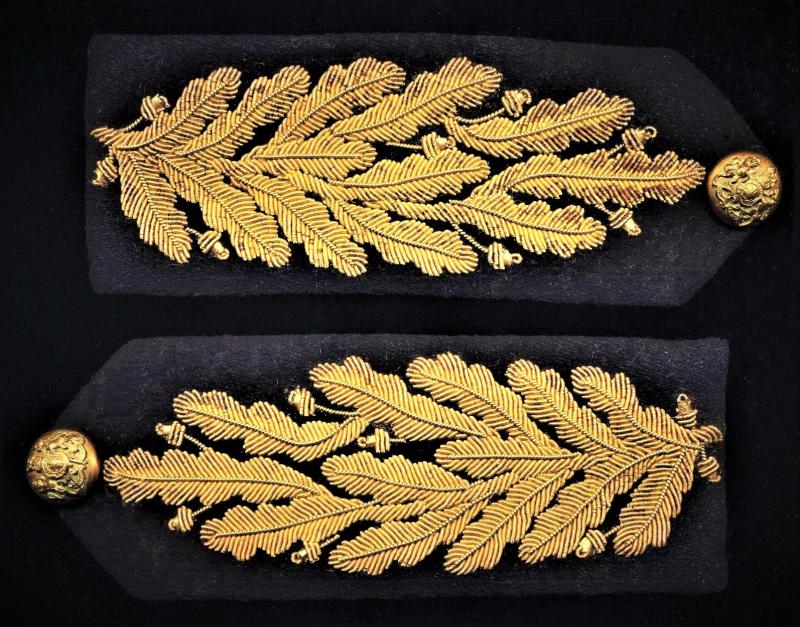 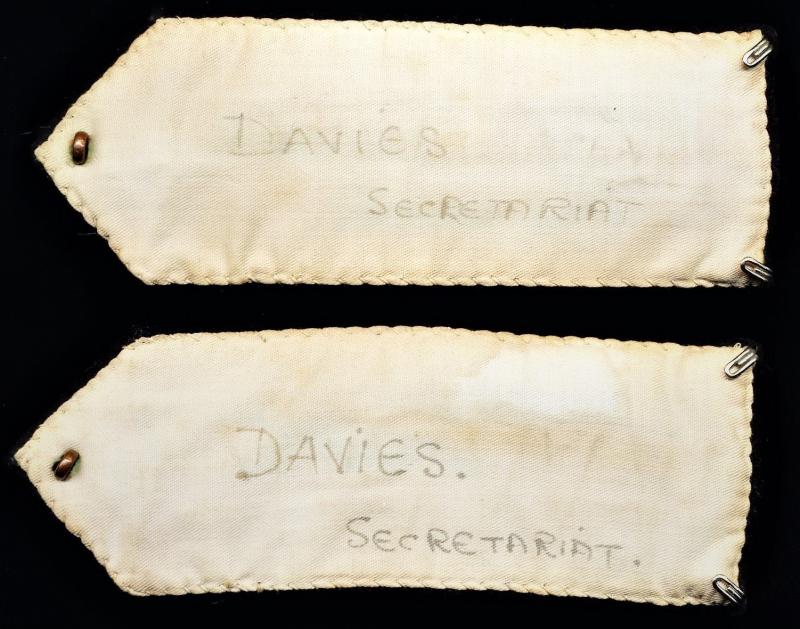 The Colonial Service epaulettes are each inscribed in ink on reverse 'Davies, Secretariat'

Order of the British Empire: The award of the MBE (Civil Division) was published in the London Gazette issue of 1 January 1945 for Kenya Colony

King Christian X Liberty Medal 1940-45 (Kong Christian den Tiendes frihedsmedaille): Commonly referred to as the 'Danish Liberty Medal' or 'Pro Dania' Medal. 'Only an estimated 3,000 of these medal were awarded post-war to Danish and foreign nationals who had performed patriotic services on behalf of Denmark's and Danish national interests during the Second World War. The medal was conferred on a number of British recipients, civil and military, including 'Winston Churchill, and 'Anthony Eden'. The military awards, to British, Army, Air Force and Royal Navy personnel all appear to have been published in the London Gazette, but no such protocol appears to have applied for awards made to British civilians (civil servants, politicians, diplomats, colonial administrators etc). As Eric Davies appears to have remained in Kenya Colony throughout the Second World War, the award of the King Christian X Liberty Medal was likely either in recognition of services he carried out in the interests of Danish seafarers while he was located on the Kenyan littoral, or for his services 1943-1945, when he was Information Officer for the Kenyan Information Service - a wartime created colonial propaganda department - in which latter he would have broadcast or otherwise promoted the interests of the Denmark on behalf of the London based 'Danish Freedom Council' (1943-45)

Important: Reference the article 'King Christian X's Medal for Freedom' published in the Orders and Medal Research Society publication 'Miscellany of Honours' issue of 1998 that includes details of the British recipients who received the 'Pro Dania' Medal

Eric Reginald St.Aubrey Davies, second and youngest son of Herbert Reginald St. Aubrey Davies (Rancher) & Mabel Elizabeth Davies (nee Bartrum) was born at, Chilcotin, British Columbia, Canada, circa 1906. Eric and his family had relocated to the United Kingdom sometime prior to 1911, as in the National Census for England & Wales, 1911, the parents and Eric re recorded residing at the family are recorded residing, at, Bures St. Mary, Suffolk, England. Eric's older brother (born Canada 1900) was killed on 17 December 1918, in a flying accident, while training as a Flight Cadet with the Royal Air Force. Eric was educated at Felsted Scool (his father was an Assistant Master at the shcool), and Corpus Christi College Cambridge, graduating with the degree of Master of Arts form the latter. After graduation Eric took up an appointment - and made a career - with the ColonialAministrative Service. His first posting was to Kenya Colony, where on 8 May 1928, appointed a Cadet (later District Officer), being seconded as Municipal Native Affairs Officer in 1939. Eric served over 25 years in Kenay Colony, during which time he was posted widly across the colony, and held numerous senior posts (see The Kenya Gazette), including; Information Officer 1943-45; Deputy. Provincial Commissioner 1946; PC 1947; Chief Native Commissioner & Member for African Affairs circa1949-54. After leaving Kenya Colony, Eric subsequently took up an appointment as the Government Secretary to the Isle of Man Government, a position he held over many years. Eric Reginald St. Aubrey Davies, M.B.E., M.A., is recorded as having died on, 7 December 1985, at Douglas, Isle of Man, at which time he had been resident at,8 Kensington Road, Douglas, Isle of Man

The medals professionally mounted in the swing-style, suspended from their original silk moire ribands and as worn by the recipient. The medal mounting bar retaining the original long hinged pin and clasp fittings

A rare, and unique grouping of medals all of which were awarded for service in Kenya Colony, and which includes a Danish King Christian Liberty, or 'Pro Dania' 1940-45 Medal