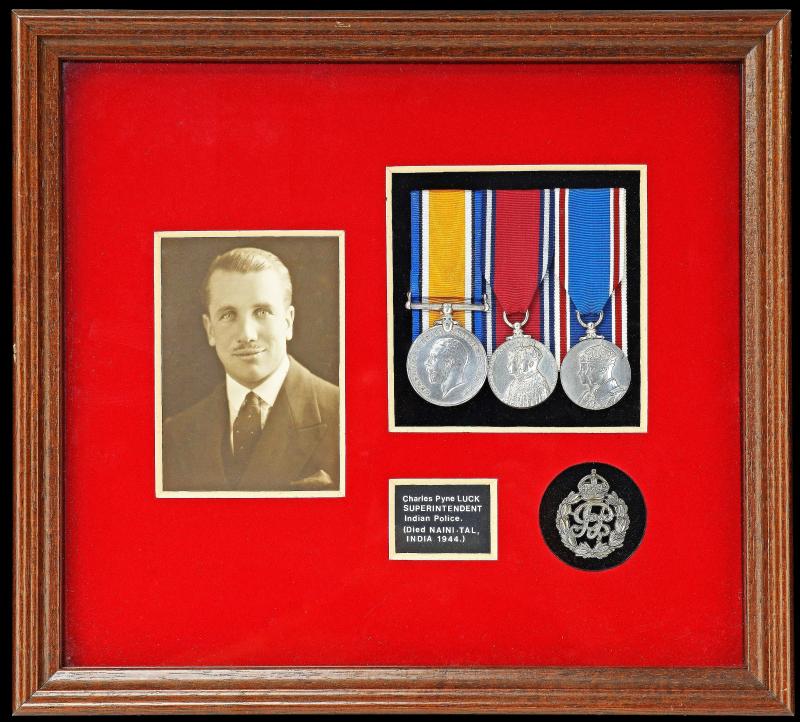 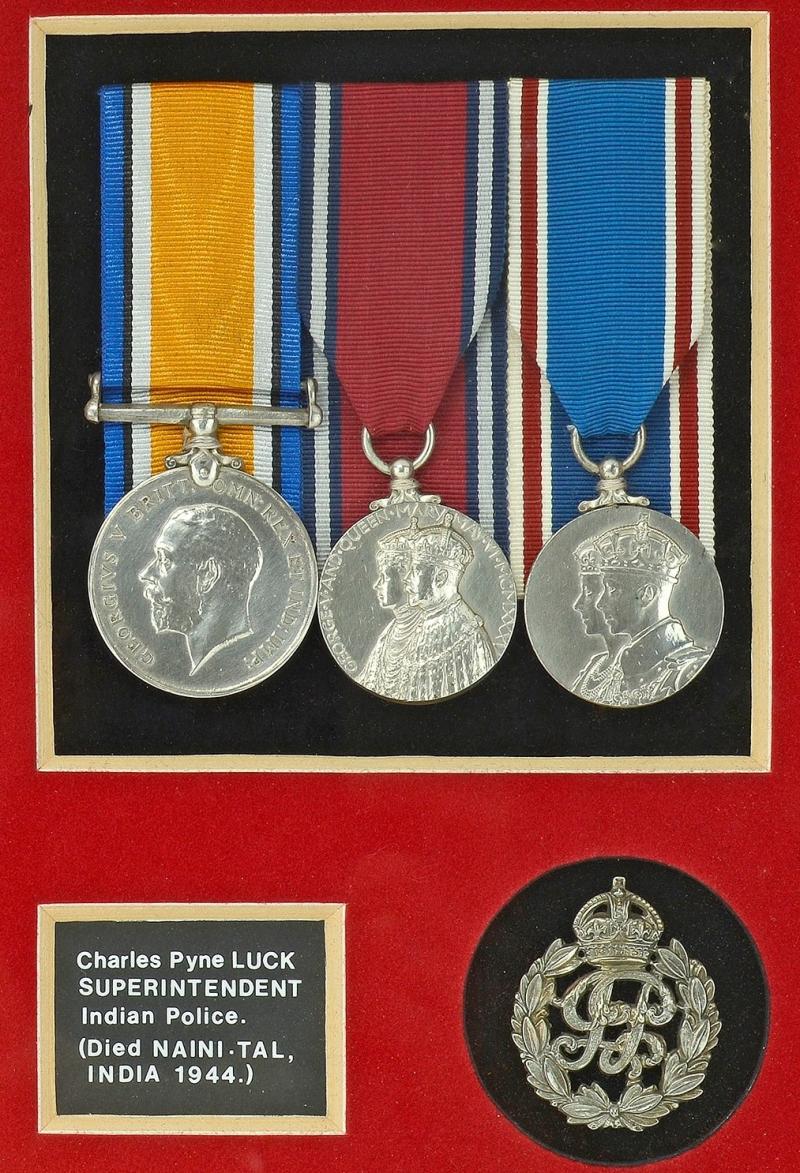 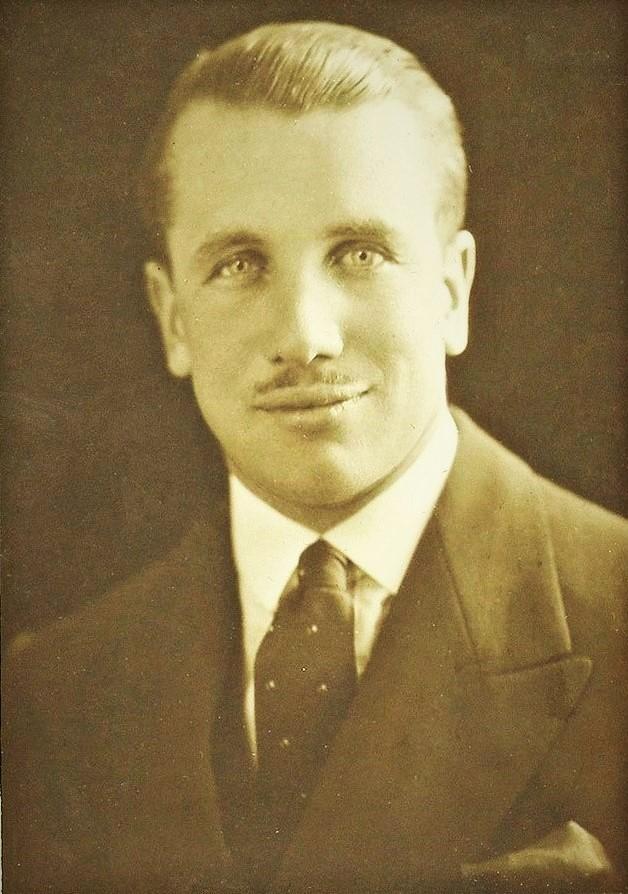 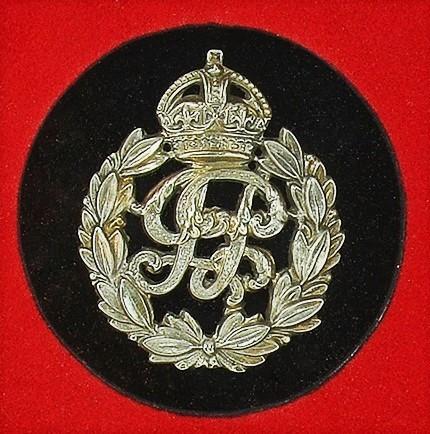 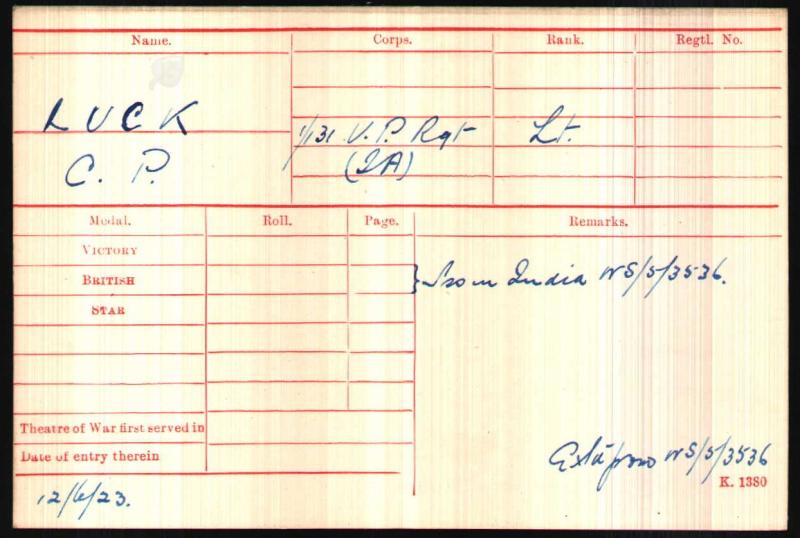 The medals all contained within a framed glazed display.

Medal verification: All 3 x medals verified as entitled per below sources:

Important: The BWM was earned serving in one of the most rarely seen Indian Army units of the Great War - 131st United Provinces Regiment - with only 'some' of the British Officers qualifying and receiving British War Medals - Officers medal never showing the regiment designation and only identifiable from extant Medal Index Cards. As neither battalion of the this war raised regiment never served overseas from India, or served in any qualifying Asian theatre of war, none of the native Indian VCO's or 'Other-Ranks; qualified for the medal, and no BWM's showing the full unit designation 1st U.P. Regiment ever being issued

Note: The 1st Battalion 131st United Provinces Regiment of the Indian Army was a war raised unit (June 1918). It's Native 'Other Ranks' (less some VCO's & NCO's transferred from the Indian Army, were exclusively drawn from Indian Police forces - ditto except for senior officers, the British Officers were all drawn from the gazetted Indian Police Service, and ungazetted junior European officers of the Indian Police Forces. A companion 2nd Battalion was raised in July 1918. The units remained based at Moradabad, India, and provided aid to the Civil Authorities on occasion. Both battalions of the 131st United Provinces Regiment were disbanded by July 1919

During his service with 1/131st United Provinces Police, Charles Luck held the rank of 2nd Lieutenant, and served as a Company Officer. Post-war, Charles served at various locations within the 'United Provinces' where is is shown variously listed as as Officiating Superintendent of Police, some of his postings are shown below:

Charles Pyne Luck son of Charles Frderick Luck 7 Luck (nee) was an overseas born 'Briton' - and 'Son of the Empire', who was born in Ceylon Colony, on, 22 January 1896. Charles took up an appointment with the Indian Police Service, which he joined as an Assistant Superintendent with effect on 22 November 1915. He was appointed to the Indian Army Reserve of Officers between July 1918 and August 1919, remaining throughout in India. On returning to the Indian Police Service, he served in various postings within the United Provinces, including the below following:

Postage: Note the frame is not suitable for posting overseas - the contents only (medals / badge / photo) will be sent overseas. For Domestic UK buyers we are quoting postage on basis that the contents only 'sans frame' is sent. If a UK buyer wants the glazed frame, sent entirely at 'Buyers Risk', an additional postage charge over the on-line quote will apply

A rare opportunity to buy the medals of a 'Son of Empire', who is confirmed as having earned his medal while serving with the 1st Battalion 131st United Provinces Regiment