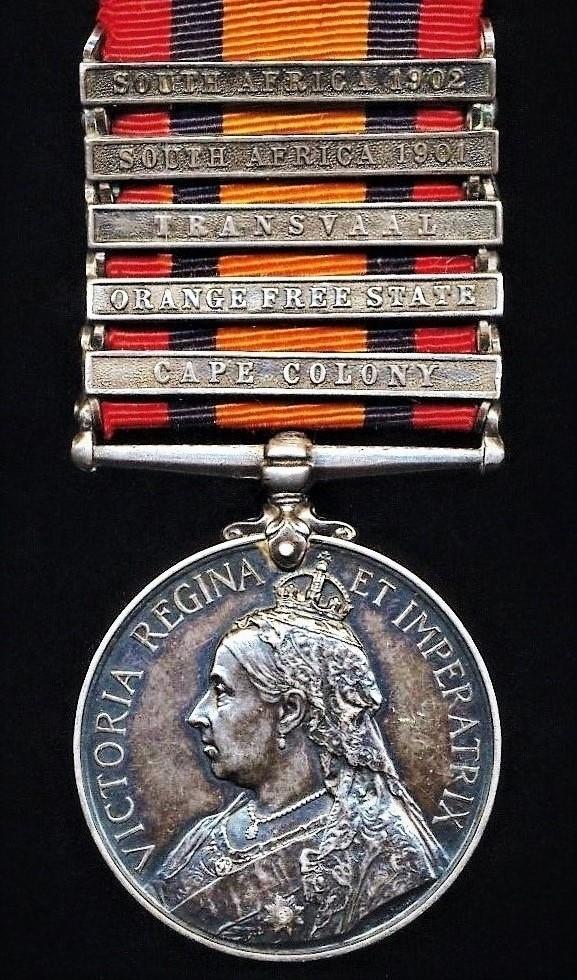 Medal & clasps verification: The medal and all 5 x clasps confirmed as entitled per the respective campaign medal roll(s) of 2nd Volunteer Service Company Scottish Rifles (attached to 2nd Battalion Scottish Rifles) reference WO 100/182 (for 3 x state clasps) that were compiled and signed 'In-the-Field' at, Greylingstad, South Africa, on, 15 August 1901 & reference WO 100/182 (for the 2 x dated South Africa clasp) which latter supplementary roll was compiled & signed at Standerton, South Africa, on, 16 May 1903

William Scott Kennedy, the son of Scottish parents, viz Hugh Kennedy (a Commercial Traveller) and Grace Kennedy (nee ), was born in Bristol, England, in, 1871. In 1901, William - described as an 'Engineer' - was already a serving volunteer in the 'Lanarkshire Rifle Volunteers', when he volunteered for service during the South African War, and enlisted for the 2nd Volunteer Service Company of the Scottish Rifles, at Glasgow, Scotland, on, 31 January 1901. At time of enlistment his terms of engagement were to be 'One year with the Colours'. In total by the time he took his final discharge from the British Army on, 29 May 1902, William had served 1 year & 19days, his service record comprising:

Prior to embarking for South Africa, William nominated his elder sister, Elizabeth Cornell (nee Kennedy), as his nominated next of kin. At the time of the nomination, Elizabeth was residing at, 11 Gladstone Terrace, Wood Green, London

Note: Service papers for the recipient are extant and are held & accessible at The National Archives