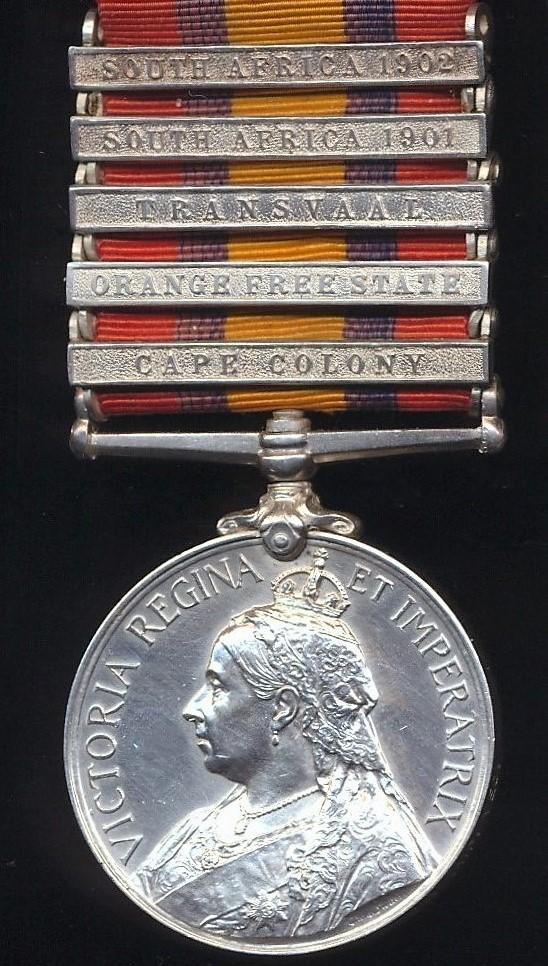 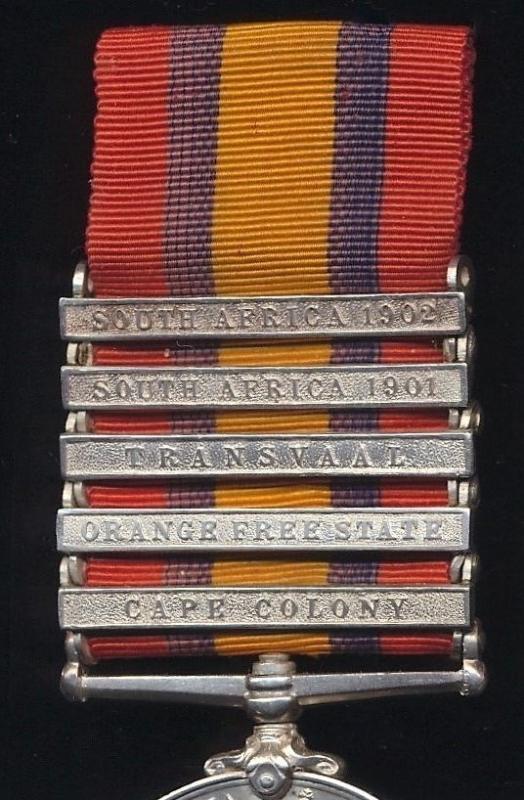 Severely Wounded-in-Action: Trooper George Smith, 74th (Dublin) Company, 8th Battalion Imperial Yeomanry is confirmed 'Severely wounded-in-action' at Rooikoppies (near Griquatown) on 24 August 1901on 1902. As a consequence of the severity of his wounds the recipients left arm was amputated, and his extant service papers held at The National Archives are marked 'Deceased' on the first page!

The action at Rooikoppies, near Griquatwon: The men of the 74th (Dublin) Company Imperial Yeomanry fought a sharp action on 24th August 1901. A two mile long convoy that was transporting food to the besieged town of Griquatown located in the north-west region of Cape Colony, which town had been surrounded by Boer commandos and was in urgent need of supplies. The convoy was escorted by the 100 strong 74th Company, commanded by a Captain James Humby, who had himself been taken prisoner at Lindley the previous year. When the convoy was attacked by several hundred Boers, Captain Humby quickly laagered the wagons. At the same time he ordered the Irish yeomanry to seize a ridge which overlooked the convoy and provide covering fire. This they did, holding it throughout the whole of the following night, during which they were involved in intense close- quarter fighting. During the defence of the convoy, the Dublin Company lost 7 men killed and 25 wounded, two of the wounded later dying. Public sympathy was increased further when it was revealed that three of the volunteer privates of the 74th who had been killed during the action, Oliffe, McLean and Bonynge, were childhood friends who had grown up together, playing alongside each other on the streets of the North Strand area of Dublin, and died fighting beside each other on the ridge.

Medal & clasps verification: The medal and all 5 x clasps confirmed as entitled per the respective campaign medal rolls of 74th (Dublin) Imperial Yeomanry (reference WO 100/123 &) which rolls were compiled and signed on, 7 September 1902 (the 3 x state clasps) & 5 April 1904 (the 2 x dated clasps). The earlier medal roll entry has the remarks 'Invalided home 13 February 1902'

George Smith, son of George Smith (who in 1901 resided 80 Manor Street, Dublin), was a native of Dublin, Ireland, where he was born in 1880. By trade a 'Carpenter' George was 21 years & 1 month of age, when he volunteered and enlisted for the Imperial Yeomanry, at, Dublin, on, 11 February 1901, his terms of engagement being for duration 'One year with the Colours'. In total George served 1 year & 152 days with the Imperial Yeomanry, taking his final discharge from the British Army on, 12 July 1902, at which time he was described as 'Discharged as Medically Unfit'. George's service history is summarised below: