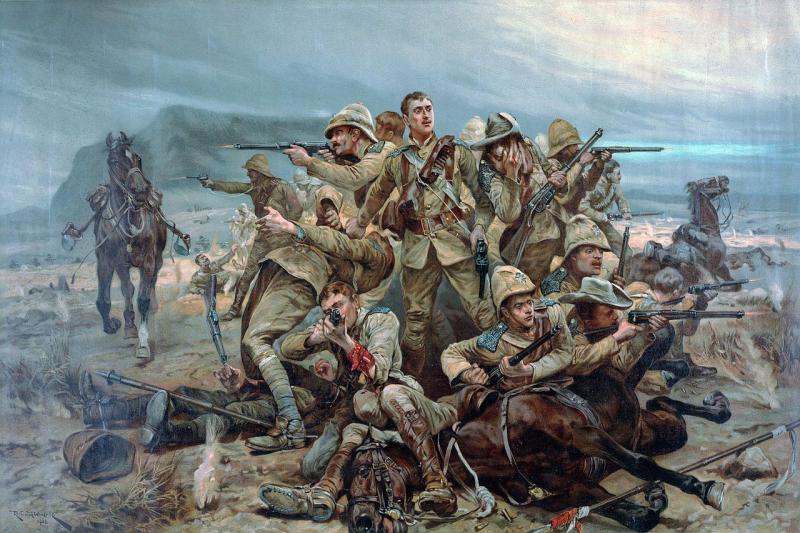 Battle of Modderfontein - The Last Stand of the 17th Lancers: On 17th September 1901, a grievous misfortune overtook a squadron under Major Sandeman. Lord Kitchener's despatch of 8th October 1901, refers as follows: "On the 17th September Smuts' commando arrived at Modderfontein, eighteen miles north-west of Tarkastad, where the Boers made a most determined attack upon a squadron of the 17th Lancers, under Major Sandeman, posted to close all egress to the south. The enemy being dressed in khaki were taken for our own troops and got to close quarters, with the advantage of ground, before the mistake was discovered. Thus taken at a great disadvantage, our men offered a most gallant resistance, and worthily maintained the traditions of their regiment. The losses of the squadron were very severe, 3 officers and 20 men being killed, and 2 officers and 30 men wounded. The Boers, who had evidently made the attack in order to elude the close pursuit to which they were subjected, also suffered heavily before the approach of another squadron of the 17th Lancers compelled them to break off the engagement"

Note: The recipients older brother Private George Linder (born Karachi, 1872) was a reservist (Police Constable in Atherstone), serving in the same regiment, 17th Lancers, during the South African War, who also, had been 'Severely wounded-in-action', in South Africa on. A younger brother ,John William Linder, was 'Killed-in-Action' in Belgium, on the first day of the 'Battle of Mons', on, 24 August 1914, at which time he had been serving with the 9th Lancers

Medal & clasps verification: The medal and all 5 x clasps confirmed as entitled per the respective campaign medal rolls of 17th (D.C.O.) Lancers, reference WO 100/118 (for first 4 x clasps) which roll was compiled and signed 'in-the-Field' at, Mayesfontein, Cape Colony, South Africa, on, 16 December 1901, and later on the supplementary page in the same medal roll that was compiled and signed at, Stobs Camp, United Kingdom, on, 17 July 1903

Charles Cecil Percy Linder, son of George Linder () & Louisa Linder (nee Nocera - an Irishwoman), was born in British India, at Mount Abu, Bombay Presidency, on, 10 October 1876 (the recipients baptism record dated 26 December 1876, shows the first given name as 'Cecil' (sic), but all other subsequent records inc 'Census' entries, record him correctly with forename 'Charles'). By the time of the 1881 National Census for England & Wales, the family had returned to the United Kingdom, and were residing at. By the time of the 1891 Census, Charles is recorded as employed as a 'Clerk' (ditto in 1911). During the 1890's, Charles followed his elder brother into the British Army, joining his brother in the 17th Lancers. After return to the United Kingdom, and discharge from the British Army, Charles reverted to his civilian training and was employed as a Clerk. At the time of the 1911 National Census for England & Wales, Charles is recorded as a 'Clerk' residing at the residence of his brother-in- law, together with his father. Charles Linder is recorded as having died at the age of 44, at Wansworth, London, England, sometime durng the fourth quarter of 1920

Famous painting: The renowned military artist Richard Caton-Woodville Jr painted his work 'All that was left of them' in 1902, being the scene of the last stand of the 17th Lancers at Modderfontein (near Tarkastand) - the painting now residing in the regimental collection at Belvoir Castle, England.All that was left of them. For illustrative purposes we have attached an image of the painting

A most desirable regimental casualty medal for the most famous action fought by the 17th Lancers during the South African War - The Battle of Modderfontien (near Tarkastad), 17 November 1901