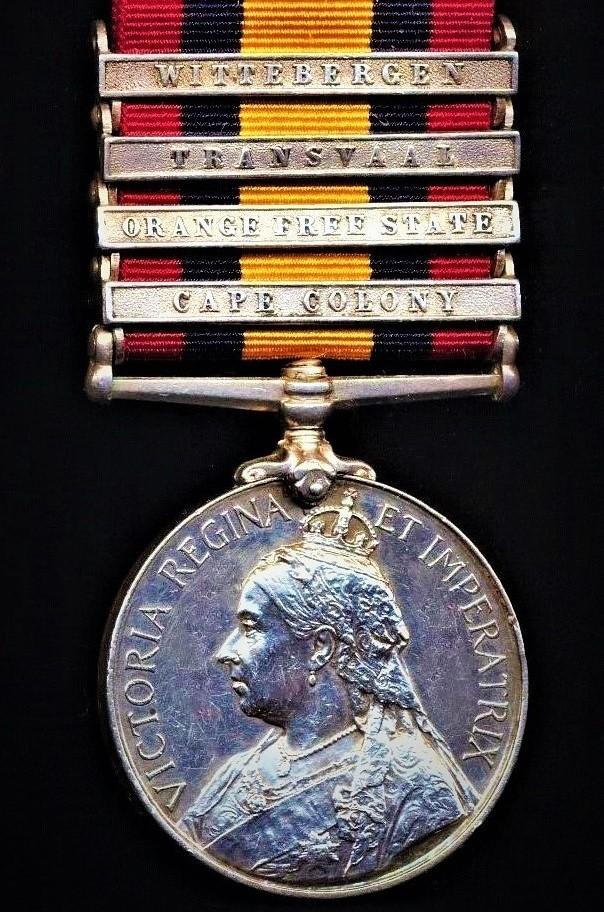 Note: The recipient was not entitled to the clasp 'Wittebergen'

Medal & clasps verification: The medal and all 3 x state clasps confirmed as entitled per the respective campaign medal roll of the 1st Battalion Seaforth Highlanders (18th Mounted Infantry) reference WO 100/203 that was compiled and signed 'In-the-Field' at Middelburg, Transvaal, South Africa, on, 25 July 1901. A later supplementary page in the same regimental medal roll compiled & signed at, Dublin, Ireland, on, 24 March 1903, shows that the recipient was additionally entitled to the 2 x dated clasps 'South Africa 1901' & 'South Africa 1902', as enumerated in the recipients service papers. This was the recipients full medal and clasp entitlement for the South African War

In addition to the QSA medal, the recipient also received the below medals for Sudan & Long Service:

James McRae, son of Donald McRae, was a Hebridean Islander, who was a native of Lochs, Isle of Lewis, where he was born circa 1875. By trade a 'Baker' James was 20 years of age, when he enlisted in the British Army at Stornoway, Isle of Lewis, Scotland, on, 5 October 1893. On the same date as his attestation, James was posted to his local regiment, Seaforth Highlanders - with which corps he had been prior serving as a volunteer with 3rd (Militia) Battalion Seaforth Highlanders. James was posted to 1st Battalion Seaforth Highlanders on 5 October 1893, and joined his battalion then located at, Tipperary, Ireland, just 6 x days later. James subsequently served a total of 22 years with the regular battalions and regimental depot of the Seaforth Highlanders, including campaign service in the Sudan, South African war, and 'Home Service' (with the Depot & 3rd Battalion) during the Great War. James took his final discharge from the British Army on 4 October 1915, by which time he was holding the rank of Sergeant. His impressive record of is summarised below:

During 1910, James McRae married, Colina McIver, at Stornoway, Isle of Lewis. The marriage being entered on the regimental 'Marriage Roll' effective 23 June 1911, the couple being recorded in the 1911 National Census for Scotland, at which time they were resident at Ardersier, Inverness-shire