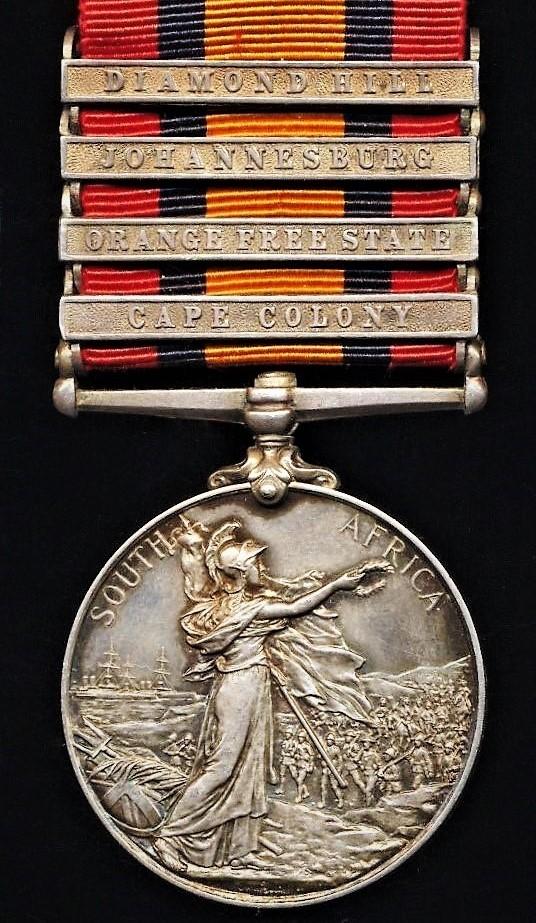 Medal & clasps verification: The medal and all 4 x clasps confirmed as entitled per the respective campaign medal roll of the 17th (Duke of Cambridge's Own) Lancers (reference WO 100/118) that was compiled and signed 'In-the-Field' at Magersfontien, Cape Colony, South Africa, on, 16 December 1901. This was the recipients only medal entitlement for the South African War

John Smith was a native of Nuneaton, Leicestershire, England, and an obituary notice pertaining to his death was published in the newspaper 'Midlands County Tribune' issue of, 21 December 1900, and is quoted below:

The death of Pte. John Smith, 3697, 17th Lancers, was notified by the War Office on Tuesday. Pte. Smith was a Nuneaton man where he was engaged to a well-known lady, for whom the utmost sympathy is felt. He was a reservist, and had occupied a good position at Heather Brickworks. Pte. Smith was a smart, promising, young man. He had suffered from enteric, but was supposed to have been recovering, and only last month he wrote home that he was preparing an account of his experiences for our columns.

The supreme sacrifice of John Smith is commemorated on the below following South African War memorials:

The medal retaining its original long silk riband as issued