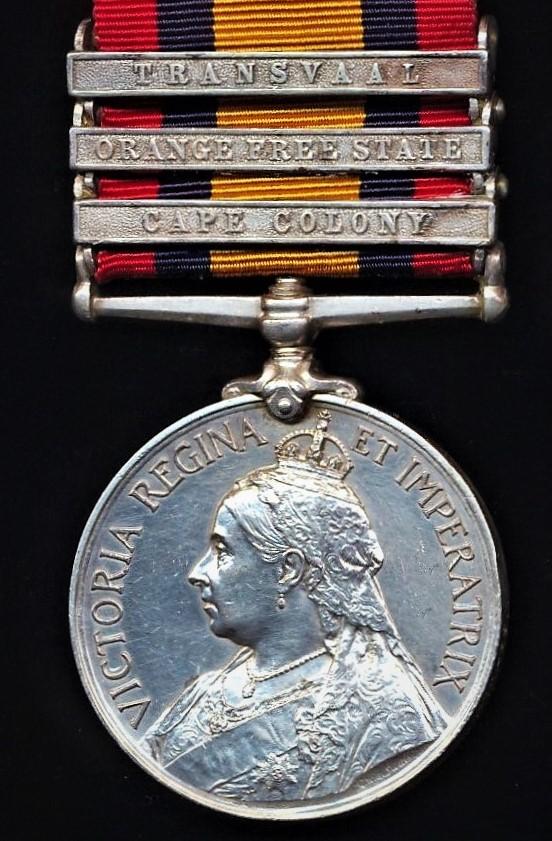 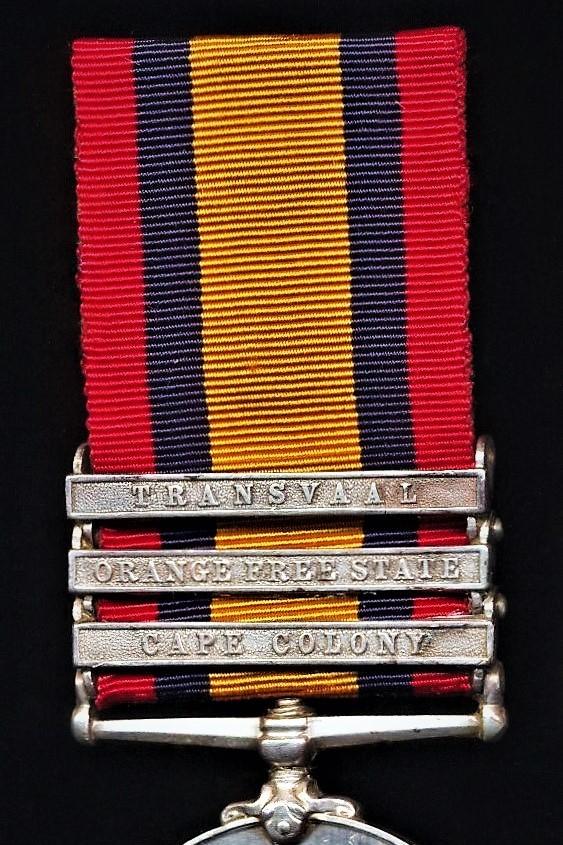 Medal & clasps verification: The medal and all 3 x clasps confirmed as entitled per the respective campaign medal roll of 1st Battalion Queen's Own Cameron Highlanders (reference WO 100/204) the roll compiled & signed 'In-the-Field', at, Pretoria, South Africa, on, 12 October 1901. The recipient was additionally entitled to the King's South Africa Medal with 2 x dated clasps (ref WO 100/344)

Donald Fraser son of Isabella 'Bella' Fraser (resident of Tomliquhart Cotter House, Croy & Dalcross, Nairnshire, Scotland) was a native of, Croy, Nairnshire, Scotland, where he was born in 1879. Donald enlisted in the British Army at Inverness, Scotland, on, 15 June 1897, on which date he was posted to the Regimental Depot of his local infantry regiment, the Cameron Highlanders. After completion of his basic training, Donald was posted to 2nd Battalion Cameron Highlanders, on, 11 August 1893. On attestation his engagement terms were 7 years 'With the Colours' & 5 years on the Army Reserve'. Donald's subsequent service history is shown below:

At the time of being transferred to the Army Reserve, Donald was holding the appointment of Lance Sergeant

On return to 'Civilian Life' - and while on the Army Reserve - Donald had obtained an appointment as 'Mess Waiter' at the Barracks, Fort George. It was while in his position of trust as a Mess Waiter, that Donald Fraser, fell foul of the Civil Authorities, when he was found guilty on several charges of theft and embezzlement, that resulted in him being imprisoned for a period of 3 x months. His criminal acts were well reported in the local press, including the below following article from the Highland News issue of, 25 April 1905:

THEFT AND EMBEZZLEMENT BY AN EX-SOLDIER

It was a somewhat pitiable story that was told by Mr. J. Sinclair-Fraser, solicitor. Inverness, at the Sheriff Court on Monday. A good looking and respectably dressed young married named Donald Fraser, a canteen waiter, Campbelltown, was charged before - Hon. Sheriff-Substitute Souter - with having, on the 17th ult., committed three acts of embezzlement, and also with the theft of a horse, at Elgin on the 10th ult. He pleaded to the second and fourth charges in the indictment. Mr. James Anderson, procurator-fiscal, accepted the pleas. Mr. Fraser, in the course of a lengthy speech, said it was the old story of drink. The accused had served in the 1st Battalion Queen's Own Cameron Highlanders for the period of six years and two days. He had taken part in the Soudan (sic) and South African campaigns, and held several decorations therefor. With reference to the charge of embezzling £10.10s, Mr. Fraser pointed out that the accused got the cheque from the man in charge of the canteen for the purpose of getting money and to return it. The theft of the horse was also part of the same drunken freak. The accused went to Elgin and got the horse more with the intention of bringing it back than appropriating it. Mr Fraser observed that his client was almost six weeks in imprisonment, and he hoped his lordship would take this fact into consideration. His lordship - Donald Fraser, you have pled guilty to the very serious crime of embezzlement and theft. It is a very sad thing to see a young man, respectable in every way, as your agent has informed me, in this sad position, more especially as you evidently gave way to drink. I mean to take all the circumstances into account in the sentence that I am about to pronounce on you, which is one of three months imprisonment to date from the period upon which you were arrested.

Note: Service papers for the recipient are extant and are held & accessible at The National Archives