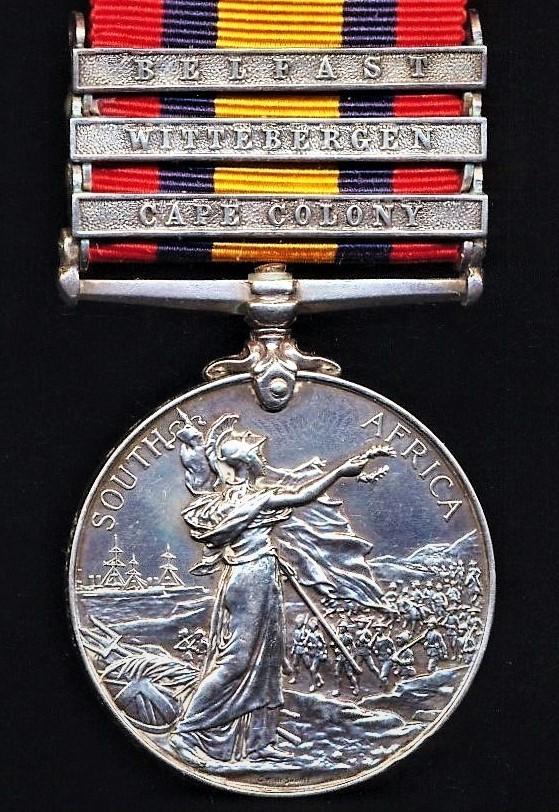 Note: Letter 'J' only of forename officially corrected - and exactly as issued

Medal & clasps verification: The medal and all 3 x clasps confirmed as entitled per the respective campaign medal roll of the 1st Volunteer Service Company Royal Irish Regiment (reference WO 100/177) that was compiled and signed at Liverpool, on, 26 June 1901. This was the recipients only medal entitlement for the South African War

James Connolly, son of Elizabeth Connolly, was a native of, Liverpool, Lancashire, England, where he was born 1872. By trade a 'Labourer' James - a serving volunteer soldier with 5th Irish Volunteer Battalion King's Liverpool Regiment - was 20 years of age, when he volunteered for overseas service in the South African War, at Liverpool, on, 19 August 1899. After attesting for service with the Volunteer Service Company of the Royal Irish Regime, on the very same day James was posted to the Regimental Depot of the Royal Irish Regiment. In total James served 316 days with the 'Royal Irish' and took his final discharge from the British Army on, 30 November 1900. James Connolly's service history is summarised below:

Liverpool Irish in the South African War:The Volunteer Force was not mobilised during the Second Boer War, but the 5th (Irish) Volunteer Battalion King's Liverpool Regiment provided 224 volunteers for service in South Africa, with some sent as drafts for the Imperial Yeomanry and 1st King's. 164 of the volunteers formed a service company for attachment to the 1st Royal Irish Regiment. The company served for ten months and returned to Britain in November 1900, having fought at Belfast, Bethlehem, Klip Flat Drift, Lydenburg, Sand River Draft, and Slabbert's Nek. On returning to Liverpool, the company marched to St George's Hall, to be greeted by the Lord Mayor and relatives. The contribution of the Liverpool Irish was recognised with the awarding of a battle honour, "South Africa 1900-02"

Private J. Connolly was one just 164 x other ranks of the 5th (Irish) Battalion, King’s Liverpool Regiment who served with the Royal Irish Regiment during the Boer War - and the only soldiers to receive medals (with various clasp combinations) named to 'Vol: Coy Rl: Irish Regt'