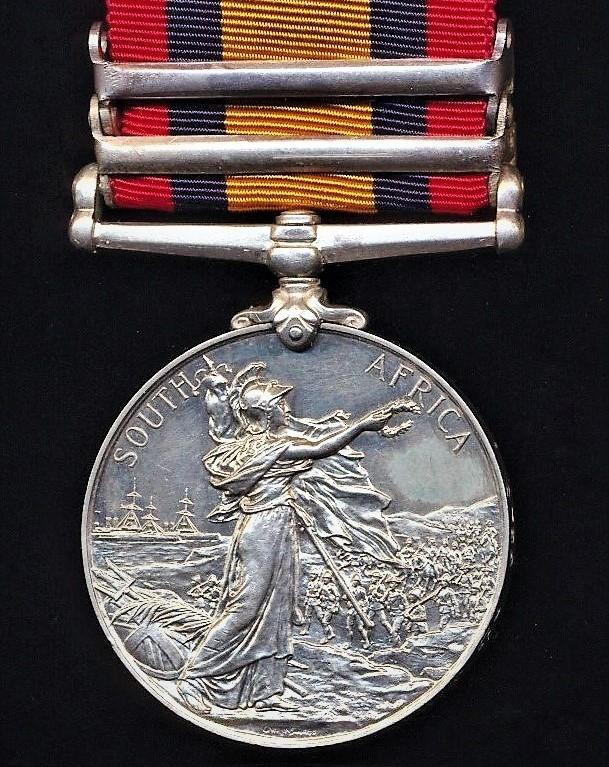 Died-of-Wounds: Private Wilson 2nd Battalion Royal Scots Fusiliers is confirmed 'Died-of-Wounds' at Pietermaritzburg, Natal Colony, on, 2 March 1900. He had been wounded during the operations to relieve Ladysmith.

Medal & clasps verification: The medal and both clasps confirmed as entitled per the respective campaign medal roll of the 2nd Battalion Royal Scots Fusiliers (reference WO 100/180), that was compiled and signed 'In-the-Field' at, Nelspruit, Eastern Transvaal, South Afric, on, 26 August 1901. The medal roll entry for the recipient has the remark 'Died of Wounds'. This was the recipients only medal entitlement for the South African War

Private John Wilson, received his mortal wounds during the fighting to relieve Ladysmith. Reference 'The Glasgow Herald' issue of 10 March 1900, contains particulars of the men of 2nd Battalion Royal Scots Fusiliers, who had recently been 'Wounded-in-Action' during Buller's attempts to relieve Ladysmith, the list includes Private John Wilson, a native of Irvine, Scotland, who was described as a 'Reservist' and who had been recalled for service during the South African War. John Wilson had originally enlisted in the Royal Scots Fusiliers at Hamilton, Lanarkshire, Scotland, on, 8 February 1890