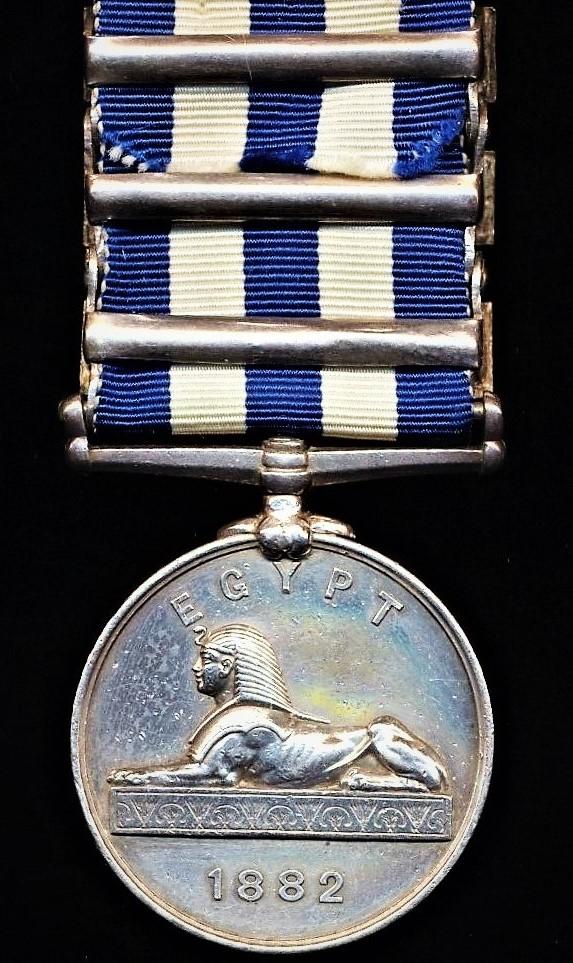 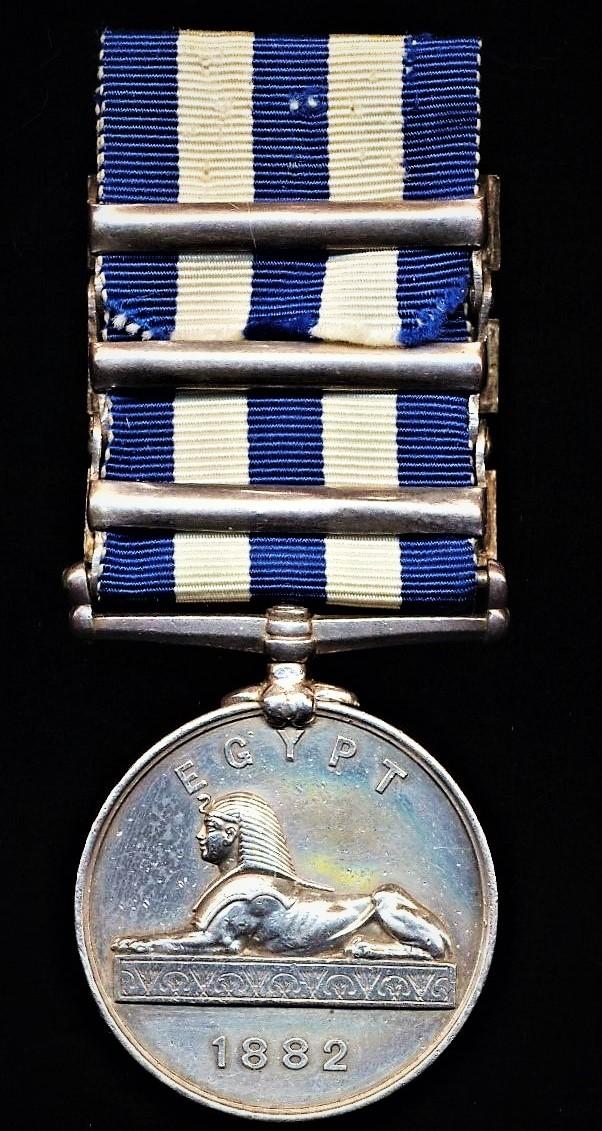 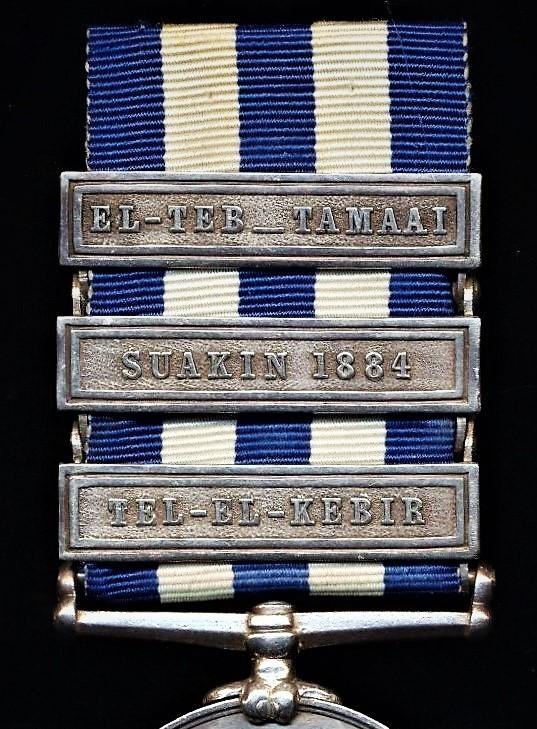 Medal & clasp verification: The medal and all 3 x clasps verified as entitled per the respective campaign medal roll for the 1st Battalion Gordon Highlanders reference WO 100/59 & WO 100/66. The recipient was also awarded an 1882 Khedival Star (the recipients extant service papers held at The National Archives, refers).

Note: The recipients brother No 1839 Drummer Francis Stephen (the recipient himself had formerly been a Drummer) also served with 1/Gordons during the Sudan campaign and was issued with a 2 clasp medal (with clasps for 'Suakin 1884' & 'El-Teb_Tamaai'). The Melia brothers - 'Fighting Irish - were born into the regiment, then styled 75th (East Stirlingshire) Regiment. The father Sergeant Daniel Melia, 75th Foot, died in 1901, and his death was reported in the Sheffield Daily Telegraph issue of, 14 August 1901, as under:

Death of An Army Veteran -

Another of the Sheffield army veterans has passed away in the person of Daniel Melia, of 65, Scotland Street. Deceased, who was 73 years of age, was found dead in bed on Monday by his sister-in-law. Dr. Ryves was called for, and found that death was due to a paralytic seizure. It is stated that Melia had had two similar strokes, which left him in a very feeble state. He was an army pensioner, having served for 21 years in the Gordon Highlanders, being pensioned off some years ago. He took part in the siege and capture of Delhi and the relief of Lucknow, and several engagements during the Indian Mutiny, for which he got a medal and two bars. He also obtained the long service medal, with a gratuity. The funeral will take place to-morrow at Rivelin, the cortege leaving the house at one o'clock. As many veterans as possible are asked to attend, wearing their decorations. The deceased turned out a few weeks ago, with other veterans, in the workmen's procession for the benefit of the Queen Victoria Memorial Fund.

Charles Melia, son of Daniel Melia (professional soldier 75th Foot from Rynaght, Birr, King's County, Ireland) & Mary Melia was born of Irish paternity, at Allahabad, British India circa 1858 (former Indian Office Library records record birth on 2 February 1860 & baptism on 19 February 1860, while another date of 1859 is cited - it is likely one of these later dates, as 1858 was in the middle of the Indian Mutiny!). Charles was raised with several younger siblings, including his brother Francis, and sisters Theresa & Agnes, the family latterly residing at Loughrea, Co Galway, Ireland. Charles was only 14 years and 7 months of age, and measuring just feet and inches in height, when on, 5 November 1872, he enlisted in the British Army at Castle Barracks, Galway, Ireland. Prior to joining the regular British Army, Charles been serving (underage) as a 'Boy' with his local 'Galway Militia'. On, 6 November 1872, Charles was posted to the 75th Regiment (became 1/Gordons in 1881), and remained with the unit throughout his subsequent military service. Charles held the appointment of 'Boy' through to 5 April 1875, his subsequent promotions & appointments included:

During his army service, Charles served at below overseas locations:

Sergeant Charles Melia took his final discharge from the British Army, at Netley, Hampshire, England, on 14 July 1885. At the time of discharge, Charles was described as 'Medically unfit for further service' due to vascualr disease of the heart (VDU). His medical condition had been specifically brought about due to military service in Egypt, where he had suffered a 'Wetting', when the boat he was travelling on the Nile was capsized, Charles subsequently suffering from Acute Rheumatism

After leaving the British Army, Charles located to Sheffield, Yorkshire, England, where during the second quarter of 1889, he married Elizabeth Brand. In 1890, a son, John Daniel Melia, was born. However, tragedy befell
the Melia's very shortly after the birth of their son, when, sometime during the third quarter of 1890, Charles died, leaving his bride, whom he had married barely a year before, a young widow to raise their baby son, and provide for his invalid father