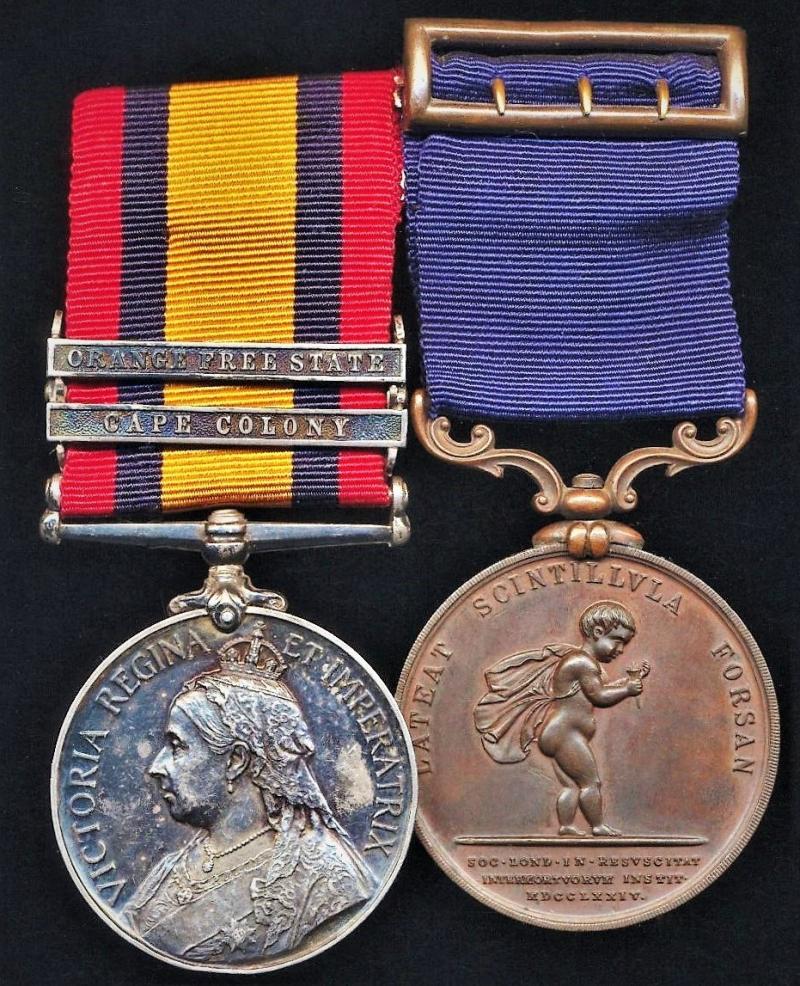 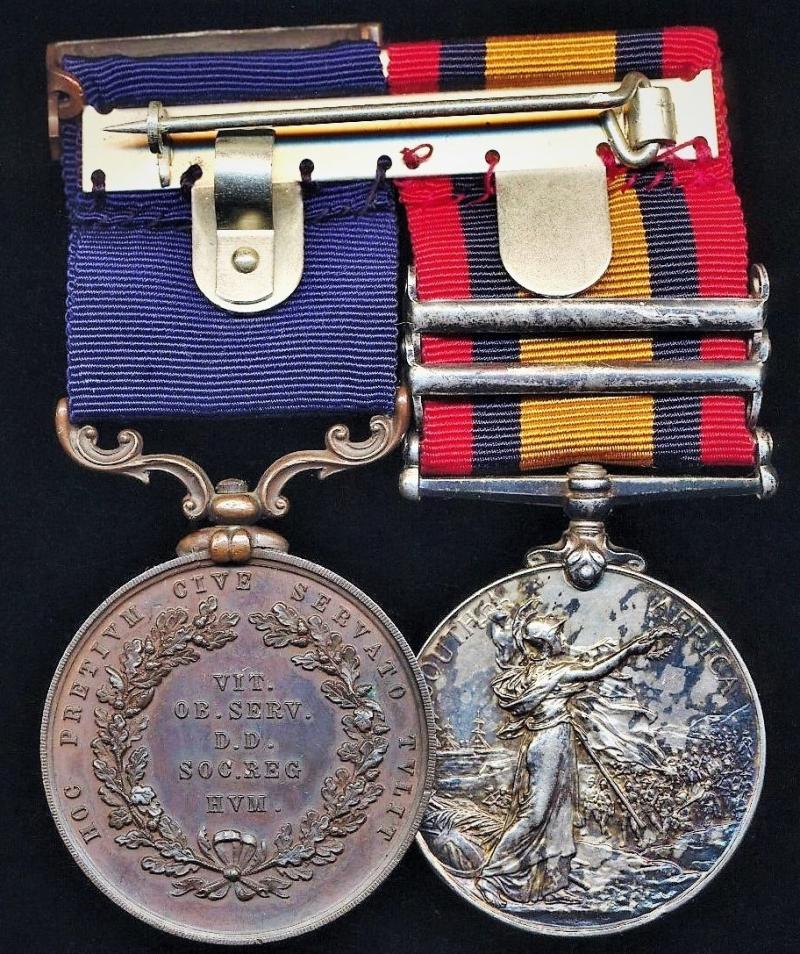 Note: The clasps on the QSA loose on carriage on riband, and fairly typical for medals awarded to men of the early Volunteer Service Company's

Aberdeen Life Saving: The Aberdeen People's Journal issue of 29 October 1898, included a pen portrait of the recipient, and below following account, quote below:

The Royal Humane Society has awarded a bronze medal to John Wilson Tait, Belvedere Cresecent, Aberdeen, for his plucky act in saving, William Smith, a watchmaker, from drowning in the Victoria Dock, Aberdeen, on the night of the 2nd inst. Smith accidentally tripped over a loose rope and fell into the water. Hearing cries of distress, Tait, ran to the side of the dock, and, when he heard some one splashing, he, without hesitation, plunged into the water. After some time he found Smith, and swan him back to the quay, from which both men were pulled up by a rope. Chief Constable Wyness, in bringing this case to the notice of the Royal Humane Society. described it as one of exceptional risk. Mr Tait, who is an expert swimmer, is only 17 years of age, and has been resident in Aberdeen only about a month. He is employed in the office of Messers Beatie and MacDonald, surveyors, Bridge Street.

Medals verification: Both medals & both clasps verified as entitled per the respective campaign medal roll of 1st Battalion Gordon Highlanders & Royal Humane Society records, as under:

John Wilson Tait, youngest son of John Tait (Gamekeeper to the 12th Duke of Hamilton) & Eleanor Catherine Tait (nee Elsden) was a native of Glasgow, Scotland, where he was born in 1880.The 1881 National Census for Scotland, records John living together with his parents & 6 x siblings (4 x older sisters, viz; Grace, Mary, Agnes & Margaret), together with 2 x older brothers, viz; James & Thomas J.) living at the family residence located at, Chatelherault Estate, South Lanarkshire, Scotland - the ancestral home of the 12th Duke of Hamilton. John, by profession an 'Architect' was already a serving member of the 1st Volunteer Battalion Gordon Highlanders, when on, 23 February 1900, at Aberdeen, Scotland, he volunteered for overseas service with the 1st Volunteer Service Company of the Gordon Highlanders during the South African War. On enlistment in the Volunteer Service Company,, John's terms of engagement were 'One year With the Colours'. In total, John served 256 days, his service history shown below:

At the time of attesting for the 1st Volunteer Service Company Gordon Highlanders, John's nominated next of kin was cited as his mother, Elanor C. Tait, 77 Desswood Place, Aberdeen. On, 1 January 1907, John Wilson Tait (27) married Isabella Mary Harris (24) in Warwickshire, England, at which time he was described as a 'Surveyor' (late of the parish of Grange, Edinburgh, Scotland). The couple were subsequently blessed with the birth of a daughter. Anne Elsden Tait, who was born at Colinton, Edinburgh, Scotland, on, 14 November 1897 and baptized in Warwickshire, England, on, 3 January 1908. john Wilson Tait is recorded as having died a, Morningside, Edinburgh, Scotland, on, 19 January 1941

The medals mounted in the swing style. The reverse of the mounting bar retaining its long hinged pin & clasp fittings

Condition: Dark patination on QSA, the medals about EF