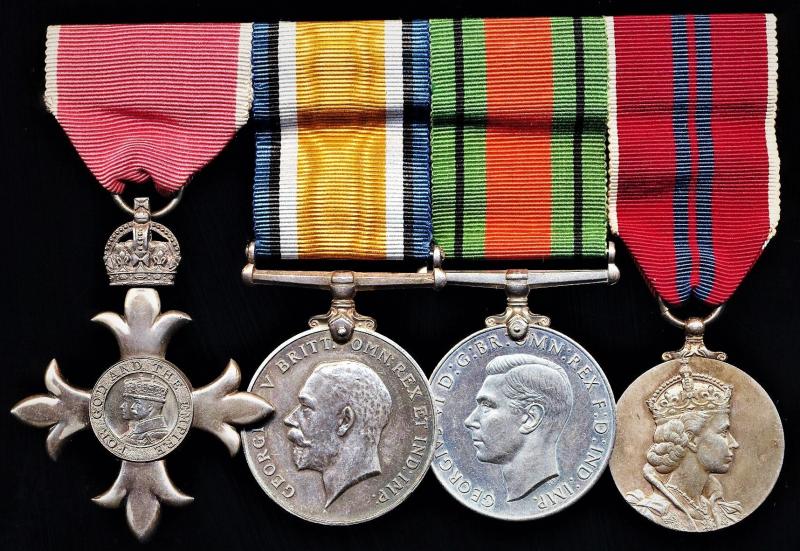 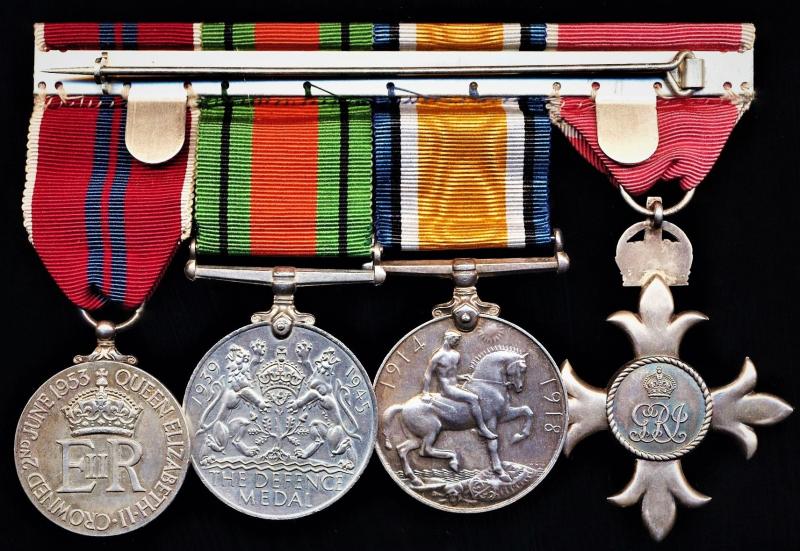 Note: The Defence Medal is named in the impressed 'Boots’ style

M.B.E. award notice was published in the London Gazette 11 June 1943. The official recommendation is quoted below:

‘Brigadier Joseph Morrison (retired, Indian Army), Air Raid Precautions Officer and Officer-in-charge Report Centre, Civil Defence Service, Teignmouth. Since the outbreak of war Brigadier Morrison has given his whole time to the administration, training and direction of the A.R.P. services at Teignmouth, and has been successful in raising an organisation of outstanding merit. The Teignmouth services have been called upon to deal with many enemy raids in their own town as well as to undertake duty in reinforcement of the Civil Defence services at Exeter and Plymouth when raids have taken place at those cities. Brigadier Morrison’s coolness and imperturbability during the progress of air raids has been an example to all serving under him.’

Joseph Morrison was born on 10 December 1877, and was commissioned 2nd Lieutenant in the Royal Artillery on 17 March 1900; Lieutenant, 3 April 1901; Captain, 30 March 1911; Major, 16 October 1915. He served in Aden, 1903-04, during operations in the interior, and with the Indian Army in India during the Great War. Sold with confirmation of single British War Medal issued by the Government in India, and of the Coronation 1953 as Representative of the Officers’ Association, Teignmouth British Legion

Reference 'Frontier and Overseas Expeditions from India, Volume 6' for details of the 'Aden Operations' 1903 - the artillery present being from the 10th (Abbottabad Mountain Battery) of the Indian Army (at the time named 30th Mountain Battery), and 2 x 7 Pdr's drawn by camels and manned by R.G.A. from Aden. The force was later supplemented by No 6 British Mountain Battery (6 x 10 Pdr guns)

The Voluntary War Work badge awarded to the recipient's wife, is being offered separately see code 21984

Son Killed-in-Action: Lieutenant-Commander William Brabazon Robert Morrison R.N. (1911-1944), Commanding Officer of H.M.S. Janues (since 16 June 1943) was 'Killed-in-Action' on 1944. off Anzio Beachhead, Italy, when H.M.S. Janus was destroyed and sunk, after being hit by a German bomb. Of the crew (the ship had a complement of 183) only 80 survived the attack & sinking. On 20 January 1944, H.M.S. Janus was involved in the allied amphibious landings at, Anzio, Italy. On 23 January, H.M.S. Janus (Lt.Cdr. William Brabazon Robert Morrison, RN) was hit by a flying bomb. The loss of the 'Janus' was a sad blow. She and H.M.S. Jervis had fired over 500 rounds of 4.7", of the first two days of Anzio, a figure typical of many destroyers which indicated the enormous amount of help given by these ships during those critical days in Italy. For his services during 'Operation Shingle' (Anzio Landings), Lieutenant-Commander William Brabazon Robert Morrison, R.N., was awarded a posthumous 'Mention-in-Despatches' (London Gazette 9 May 1944). For his services during the Second World War. Lt-Cdr W.B.R. Morrison, R.N., is known to have been entitled to below following medals: