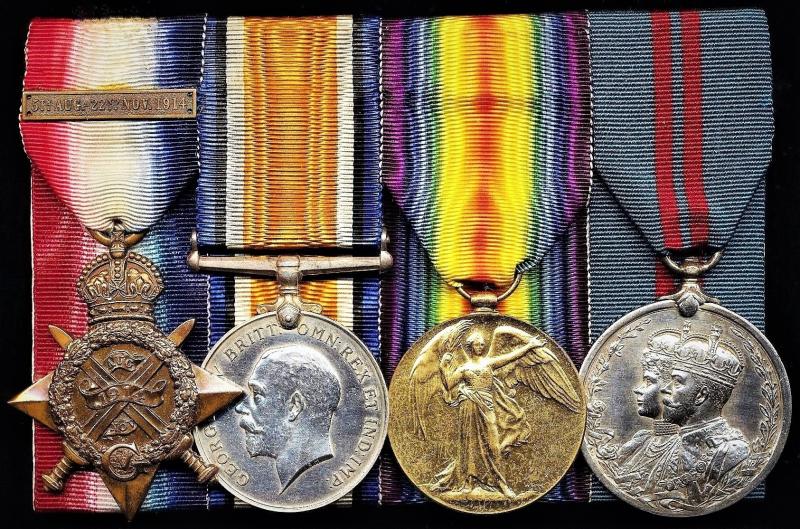 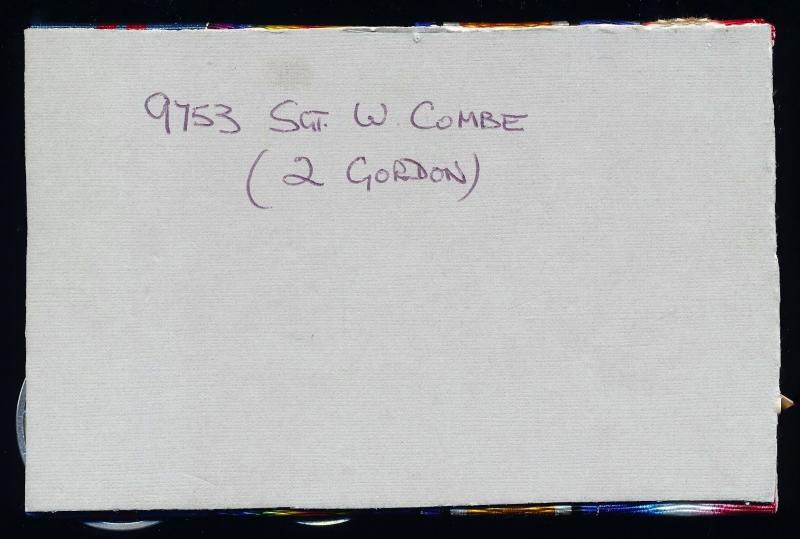 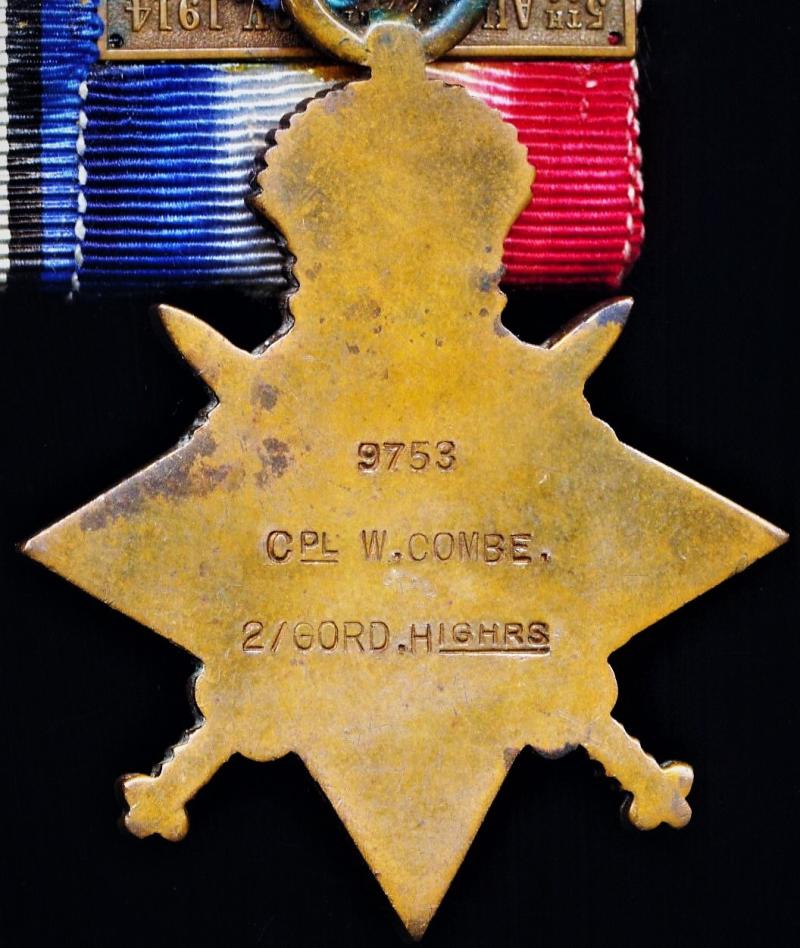 Medals and clasp verification: All medals and clasp confirmed as entitled per the respective medal rolls of 2nd Battalion Gordon Highlanders as cited:

Wounded-in-Action: Confirmed 'Wounded-in-Action', France & Flanders December 1914, reference Aberdeen Evening Express issue of 15 December 1914, that published a summary list of 'Expeditionary Force Losses' advised by the 'Press Bureau' (released on 14 December 1914), and under a heading 'Gordon Casualties' shewed details of 1 x Gordon Highlander who had 'Died of Wounds', and the service details of 38 x Gordon Highlanders who had been 'Wounded', including 9753 Lance-Sergeant W. Combe. With note that he been born in Guernsey, Channel Islands, and had been employed as a 'Plater' prior to enlisting in the British Army

William Combe, eldest son of John Combe (Sergeant, Gordon Highlanders & veteran of the Egyptian & Nile campaigns 1882-1884) and Joan Reid Combe (nee Ross) was a native Scot, born into the regiment, at, Guernsey, Channel Islands, in 1886. The 1891 National Census for Scotland, records William, residing with his parents and 2 x younger sibling brothers, at the Militia Barracks, King Street, Aberdeen, where his father was serving as Colour Sergeant with 3rd (Militia) Battalion Gordon Highlanders. By the time of the 1901 Scottish Census, the family had grown (William now had 8 x siblings, comprising, 5 x brothers and 3 x sisters) and had relocated to, Glasgow, Scotland, where the father was employed as a 'Warehouse Porter', and William was employed as a 'Twine Shop Assistant'. When considered old enough, and like his father before him, William chose a career in the British Army, and became a professional soldier when in, 1905 he enlisted in the family regiment, the 'Gordon Highlanders', being posted the the 2nd Battalion. Immediately prior to his enlistment, he had been employed as a 'Plater'. Prior to the Great War, William served in British India, and was one of the Gordons specially selected for the award of the highly prized 'Delhi Durbar' medal in respect of his service at the Great Durbar held at New Delhi, India, in December 1911

In August 1914, William Combe was serving with 2/Gordons at Cairo, Egypt. William first entered theatre of war, 'France & Flanders', on 7 October 1914, on which date 2/Gordons landed at the Belgian port city of 'Zeebrugge'. William was reported 'Wounded-in-Action' in December 1914. At some stage during the Great War, and quite possibly as a result of his wounds, William was transferred to the, 462 Home Service Company Employment Company (and given the regimental number 233962), which was a Labour Corps unit serving under Scottish Command. William married Winifred Abel McKenzie at, Aberdeen, in 1918. William ended his military service with his old unit, being returned to, 2nd Battalion Gordon Highlanders, and was allocated the unique army number 2865072, which was in the regimental block allocated to the Gordon Highlanders in 1920, i.e. 2865001-2921000 - his number showing that he was one of the senior-most NCO's of the regiment then serving in 1920 (sequentially he held the 71st lowest number)

William Combe, (54 years of age) late Sergeant, 2nd Battalion Gordon Highlanders, is recorded as having died at his home located at, 17 Froghall Avenue, Aberdeen, Scotland, on, 13 February 1941. On the anniversary of his death an 'In Memoriam' notice was posted by his widow in the Aberdeen Evening Express issue of 13 February 1942, which indicates that William had sons and a daughter serving in His Majesty's Forces

The medals mounted on card for display in the court-style