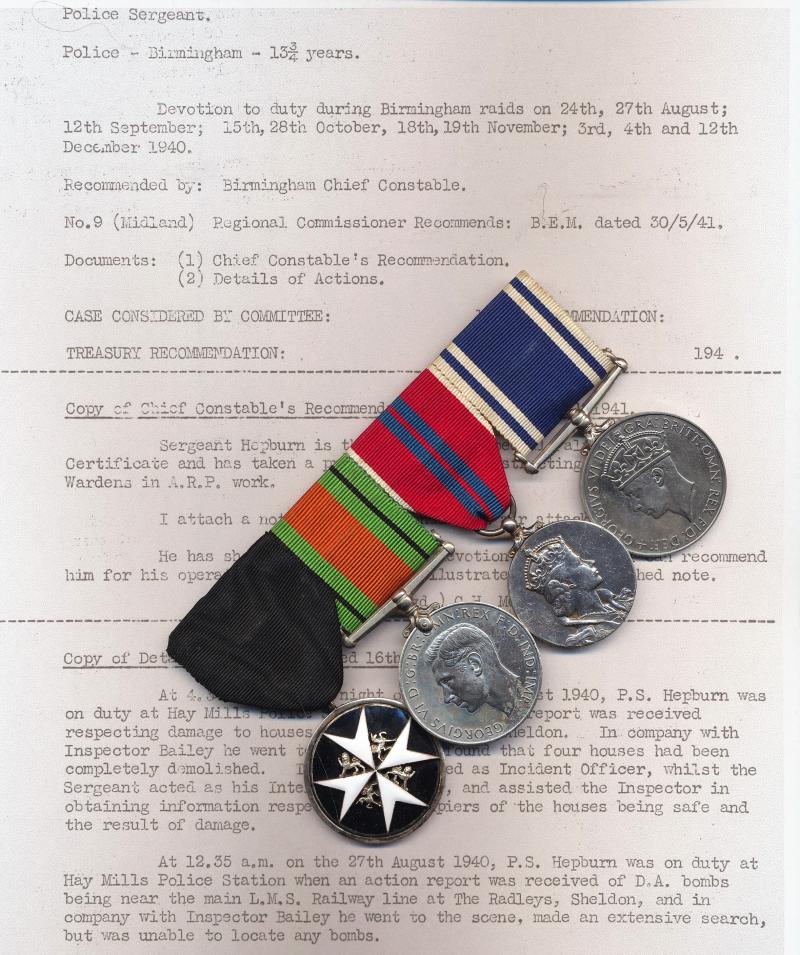 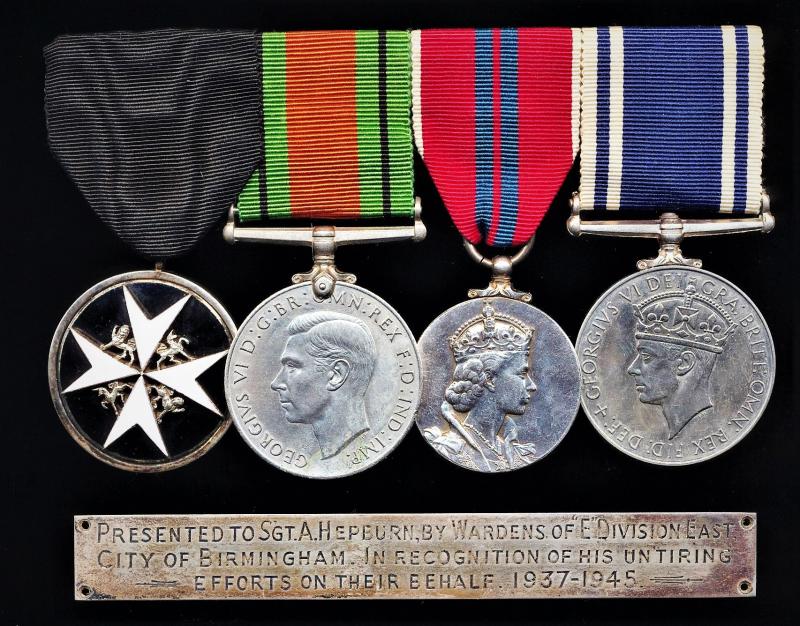 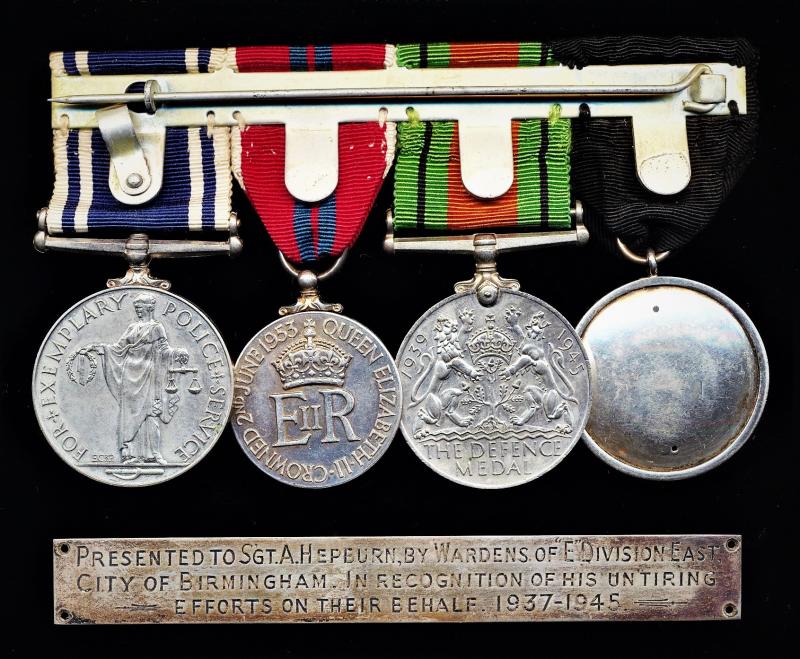 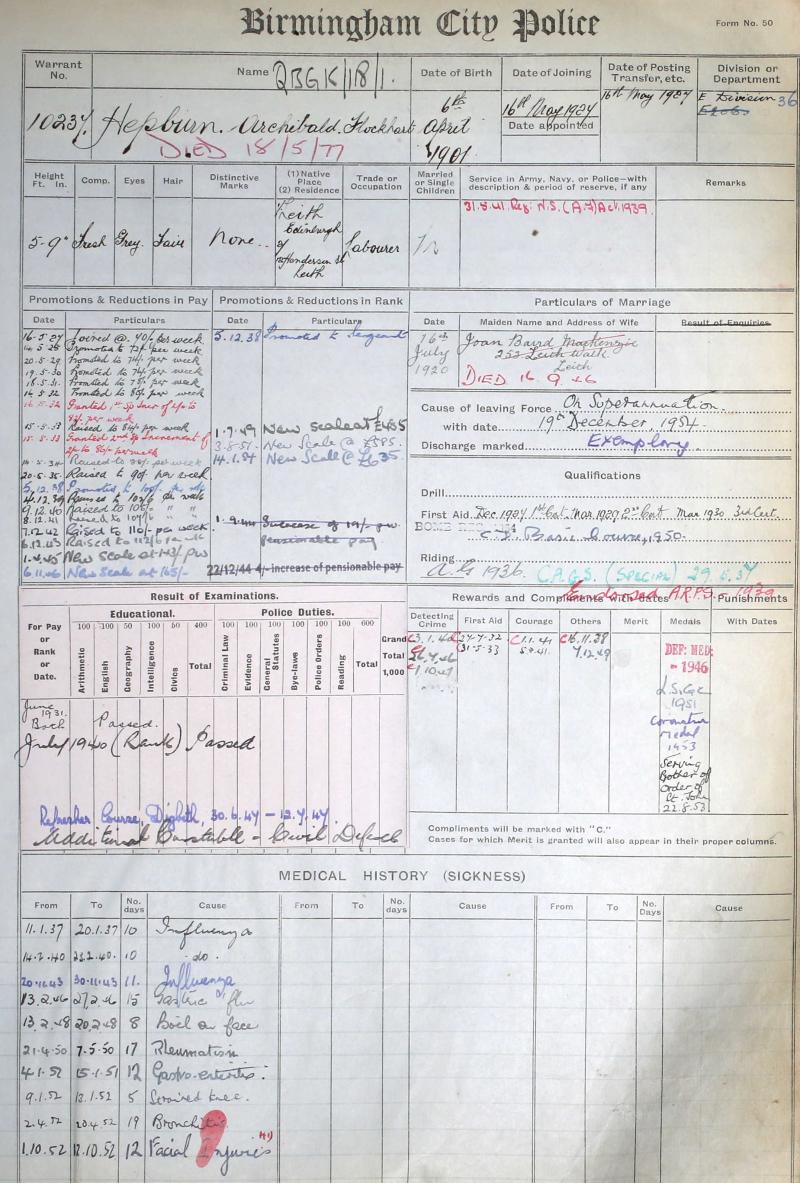 - A silver or silver plated presentation plaque engraved on 3 x lines 'Presented to Sergt A. Hepburn, by Wardens of 'E' Division East City of Birmingham. In recognition of his untiring efforts on their behalf. 1937-1945

Medals verification: All awards confirmed as entitled per the recipients extant police service records, held and accessible at, wherein all awards are enumerated. Additionally, the specific award dates of 2 medals is:

- Order of St. John verification: The award of the 'Serving Brother' insignia was published in the London Gazette issue of 12 January 1954
- Police Long Service and Good Conduct Medal: Awarded

Gallantry during Birmingham Air Raids 'Birmingham Blitz 1940': The recipient was specifically recommended by the Birmingham Chief Constable (reference Case 1284 dated 30 May 1941) for the award of the British Empire Medal for repeated instances of gallant and distinguished service during the period of the 'Birmingham Blitz', 24 August - 2 December 1940, during the 'Battle of Britian'. In the event the recommendation was not upheld, however the extremely length & detailed B.E.M. recommendation of his work in Civil Defence is extant & accessible at The National Archives (HO 250/32/1284), and is a superb testimony to the recipients outstanding bravery during the 'Birmingham Blitz' of the Battle of Britain

The recommendation is extremely long ( 5 x typed pages) and too long to repeat here, but a soft copy will be sent to the buyer by email attachment

Archibald Flockhart Hepburn, son of Hepburn & Hepburn (nee) was a native of Leith, Midlothain, Scotland, where he was born in 1901.

The medals mounted as-worn by the recipient in the swing style. The mounting bar retaining the original long hinged pin & clasp fittings