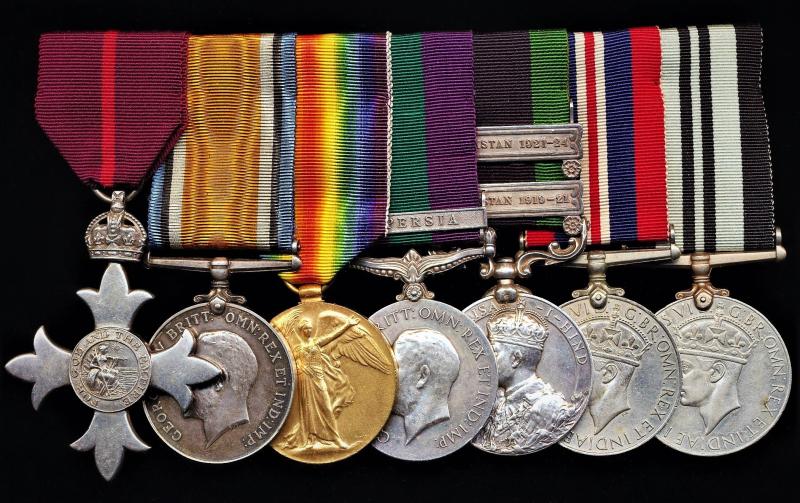 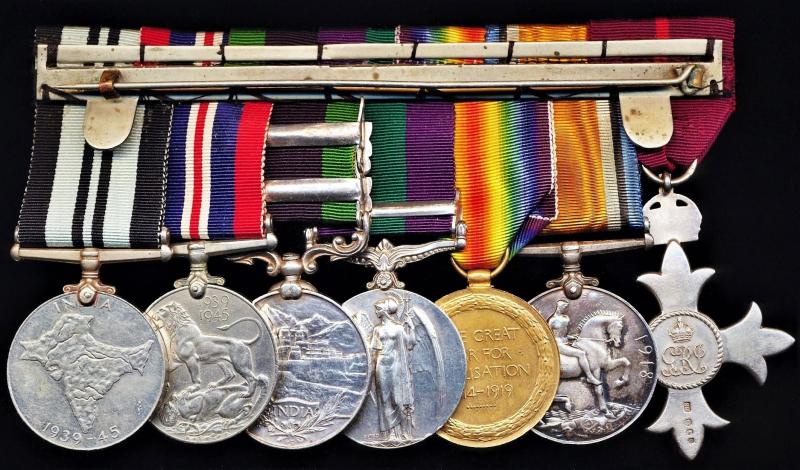 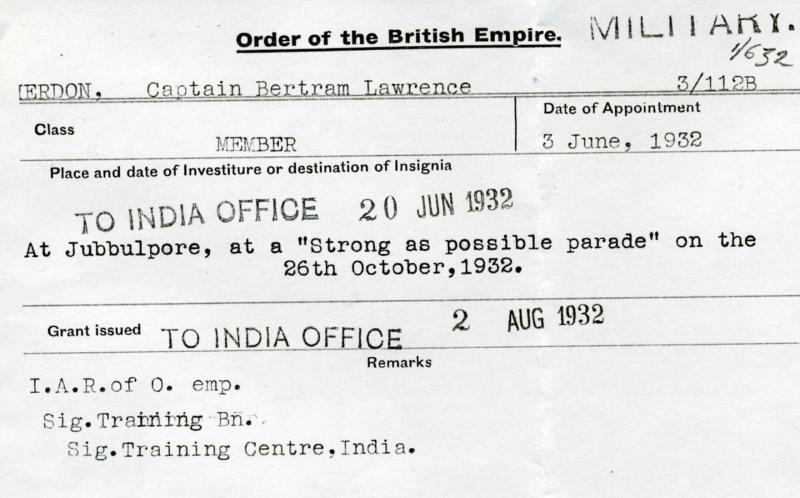 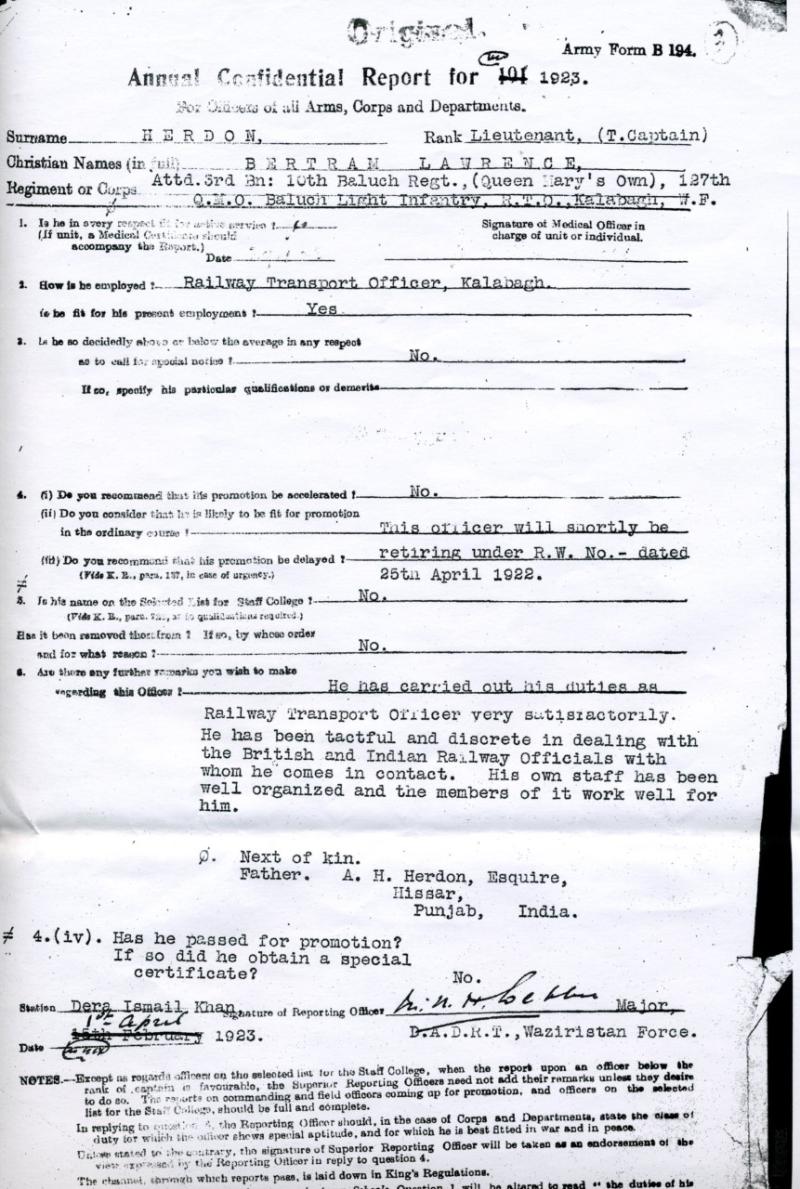 Important: The Great War pair of medals are original medals with skimmed rims. Although the recipient - a habitual resident of British India - was serving with the Indian Army 1917-1918, there is no evidence that he served in any of the qualifying 'Asian' theatres that would have entitled him to a Great War pair

Medals verification: The MBE and named campaign medals verified as entitled per the London Gazette, Indian Army list or respective medal rolls cited below confirmed as serving in the Indian Army 1939-1943, and hence entitled

Bertram Lawrence Herdon, only child of Albert Hampton “Bertie” Herdon (born India in 1865 and employed from 1890 with the 'Secret Service Department) & Elizabeth Jane Herdon (nee Rehill, India born, at Fyzabad) was born in India on 13 March 1898, and baptised at, Amritsar, Punjab, India, on. 6 April 1898

Bertram is reported to have been educated, in India. In 1917, he had claimed ‘6 years, Volunteer’ service - which would only have been possible if he was including 'Cadet' status with one of the Cadet Corps affiliated with the Volunteers (the Naini Tal region had Cadet Corps). It was also noted at the time that he had knowledge of the French, and Urdu languages

1st Battalion, 127th Queen Mary's Own Baluch Light Infantry: This Regiment had been raised in Karachi (1844) by Major J. Jackson, by order of Sir Charles Napier, and had gone through several name changes, the latest having been in 1910. The composition was one company of Punjabi Musalmans, 1 ½ of Mahsuds, and 1 ½ of ‘other Pathans’

South Persia Force: Lieut. B. L. Herdon was ‘Attached’ to 1/127 Baluch on 18 August 1917. The regiment was ordered to Southern Persia during October 1918, but their despatch was delayed due to the severe influenza epidemic which claimed many lives. They apparently eventually arrived on 12 November, one day too late for qualification for the Victory Medal (awarded into 1919 for other Theatres). The General Service Medal to Herdon was one of fourteen to officers of the Regiment, with clasp S. PERSIA to Lieut. B. L. Herdon

Confidential Indian Army Reports 1920-23: Happily, three such reports survive for Herdon. The first was made out and signed by Lt.-Col. Hulsenberg at Chaman, on 12 February 1921. This noted that Lieutenant Bertram Lawrence Herdon had been employed as officiating Company Commander of 1/127 Baluch. The colonel reported:- ‘Works hard and has a good grasp of his work. Knows his men well and is popular with them. A good sportsman and rider.’ On 18 April 1921, also at Chaman, the Brigadier wrote: ‘I concur.’ The second was made out by Major C. R. Hartley at Dehra Ismail Khan on 1 April 1922. This noted that Lieut. Herdon, 127 Baluch, had been attached ‘R.T.E.’ and employed as ‘Military Forwarding Officer’, Darya Khan. The major (‘D.A.D.R.T. Wazirforce’) [Deputy Assistant Director Railway Transport], reported:- ‘4 years 11 months Commissioned Service. 3 years 11 months as a Lieutenant. Direct Commission. Has done his work well. No musketry qualifications. No awards.’ On 11 April 1922, Major General Matheson, Commanding, Waziristan Force at Head Quarters, Waziristan Force, wrote: ‘Has done well.’ This report was initialled in Herdon’s bold hand: ‘BLH’. The third Confidential report was made out on 15 February 1923, but later signed by Major M. N. H. Webber, D.A.D.R.T. Waziristan Force, at Dehra Ismail Khan, on 1 April 1923, and was type-written:- ‘Employed as Railway Transport Officer, Kalabagh, Waziristan Force. This officer will shortly be retiring under Royal Warrant dated 25 April 1922. ‘He has carried out his duties as Railway Transport Officer very satisfactorily. He has been tactful and discreet in dealing with the British and Indian Railway Officials with whom he came in contact. His own Staff has been well organized and the members of it work well for him. ‘Next of kin. Father: A. H. Herdon, Esquire, Hissar, Punjab, India. ‘Has he passed for promotion? If so, did he obtain a special certificate?. No.’ This final report was also signed by Major General Matheson on 28 April 1923, and a copy sent to Herdon on 21 May 1923.

Waziristan Force: The London Gazette of 27 October 1922 reported (under ‘STAFF’) that Lieut. B. L. Herdon, I.A., had been granted the temporary rank of Capt., while holding the appointment as ‘R.T.O.’ (Railway Transport Officer), Waziristan Force, with effect from 26 June 1921. For his services - away form his parent Baluchi regiment - earned for Bertram the India General Service Medal 1908 with both of the 'Army' issue 'Waziristan dated clasps. The Regimental List of July 1921 helpfully noted that his appointment was as ‘R.T.O., Darya Khan’. The following year (Indian Army List, January 1922), Lt. B. L. Herdon had shifted post to become ‘R.T.O., Khirgi’ (on the Frontier).

Promotion to Captain & Retirement as Lieutenant: ‘India Office: The KING has approved the promotion of B. L. Herdon (Lieutenant to be Captain).’ This no doubt welcome promotion to Capt. (with effect from 1 February 1923) was gazetted in the London Gazette of 3 August 1923, p. 5345. Inexplicably (following on from his promotion to Capt.), but possibly having had something to do with gratuities, or perhaps the rules of the recently-proclaimed Royal Warrants, Herdon was gazetted as a ‘Lieutenant, I.A., to be retired, with effect from 24 July 1923.’ ‘The KING has approved the retirement of the following officers [four captains and two lieutenants], under the provisions of the Royal Warrants, dated 25 April 1922 and 25 April 1923’: London Gazette of 22 February 1924, page 1575

Lacuna: It is not yet known what occupation Bertram Herdon, by then aged 25, followed after mid-1923. He seemed to have been possessed of above-average intellect, with a penchant for languages and poetry. His parents Bertie and Eliza were still alive, and still living in Simla. However, it is known that he visited England, perhaps on leave pending his retirement. His father Albert Hampton “Bertie” Herdon (who had joined the IARO and had been a Recruiting Officer for Punjabi Musalman's at Jullundur during the Great War), would have almost certainly retired from the Secret Service Dept., by then.

Return to India, 1925: At that time in the rank of Capt., he took passage – with his mother – on the B. I. S. N. (British India Steam Navigation) Company Ltd. liner “Mandala”, departing from London on 20 January 1925, and bound for Bombay, under its Master and Captain R. G. Kitson.

Signal Training Centre, Jubbelpore: Clearly AIRO Capt. Herdon did very good work during his Attachment to the Signal Training Battalion, Signal Training Centre, India (at Jubbulpore). This may have been his 1 April 1928 ‘Army’ secondment, and he was the only AIRO present. The Commandant was Colonel L. Griffith, DSO, psc, and the Signal Training Battalion Commander was Lt.-Col. A. G. J. Copeland. Interestingly (again), was the fact that the Adjutant was a Capt. W. F. H. Herdon – soon to be replaced. Colonel H. C. Smith, DSO, psc, was probably responsible for recommending Herdon for a decoration. This was announced in the King George V Birthday Honours list, published on 3 June 1932

Member of the Order of the British Empire: the announcement of his MBE (Military Division) read:- ‘Captain Bertram Lawrence Herdon, Indian Army Reserve of Officers, employed Signal Training Battalion, Signal Training Centre, India.’ Appointed MBE on 3 June 1932, Capt. Herdon was Invested at Jubbulpore, Central India, with his decoration of 26 October 1932. It was noted that the parade was as ‘Strong as possible’, which sounds rather curious. He went on leave in India, with an MBE behind his name, from March to 27 September 1933

Poet: In 1936, Bertram Herdon had a 32-page book called “SHESHA (A Poet’s Mirror)” published. He dedicated it to his uncle John Ferguson Rehill:- These poems have appeared from time to time in the “Illustrated Weekly of India,” the “I. P. M.” and the “Civil & Military Gazette,”

Editor of 'Fauji Akhbar': On 1 September 1938, Major Herdon was additionally appointed a GSO 3 at Army Headquarters, as Translation Officer and Editor of “Fauji Akhbar” – a weekly Indian Army newspaper for the troops, published in English, Urdu and other Indian languages.

Death of father: On 21 April 1939, Bertram’s father A. H. ‘Bertie’ Herdon, 74, died of a heart attack, at Simla. This left Bertram’s mother, to whom he was very close, a widower after forty-seven years of marriage in India

Urdu & Persian Prioficiency: The newly-added linguistic qualification in Persian (F. S. Proficiency Test) was listed in the July 1942 Indian Army List. Herdon was shown under ‘Majors’, and belonging to the I.S.C. (Indian Signal Corps): ‘Signals Training Centre, India’; ‘A.I.R.O.’; and ‘Reserve of Officers’. By the July 1942 Indian Army List, he was still under ‘Majors’, but only ‘Signals’.

Finally, the London Gazette of 10 September 1943, under ‘Army in India Reserve of Officers', had the two-line announcement:- ‘Major B. L. Herdon, MBE, ceases to belong to the Reserve on account of ill-health. 1 February 1943.’ He was forty-four years old. He disappeared from the October 1943 Indian Army List.

Berram's widowed mother lived at Simla, India, through to Indian Independence. In 1948, Bertram's mother relocated to England, when on, 29 April 1948, Elizabeth (Eliza) Jane Herdon, née Rehill, was obliged to sail for London aboard the “Ormonde”. Elizabeth Herdon settled in Newton Abbot, Devon, and died in June 1949, a year and two months after leaving India, the land of her birthplace. She had reached the age of eighty-six

It is not known - by us - when and where Major B L. Herdon M.B.E. died. His last known residence being his 'Eerie' located at Pathankot in the Punjab Hills (now in Pakistan), where throughout 1946, the local English language newspapers contained commercial adverts, for items that the Major was selling, including but not limited to: A five round 'American' Pistol; Chickens; a Horse, and several 'Daschunds.........

Given the paucity of anyone called HERDON, there is a splendid portrait of a Cadet 'B. Herdon' in the uniform of the Motor Volunteer Corps, circa 1917, held in the Imperial War Museum 'Collections' - which quite likely may well be Bertram!