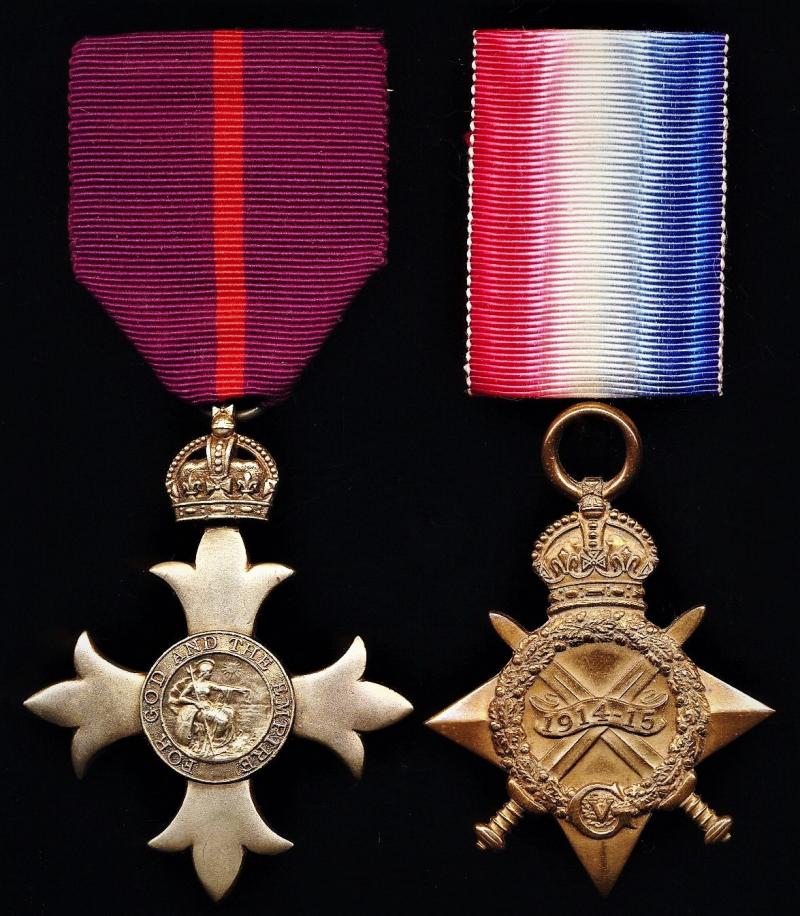 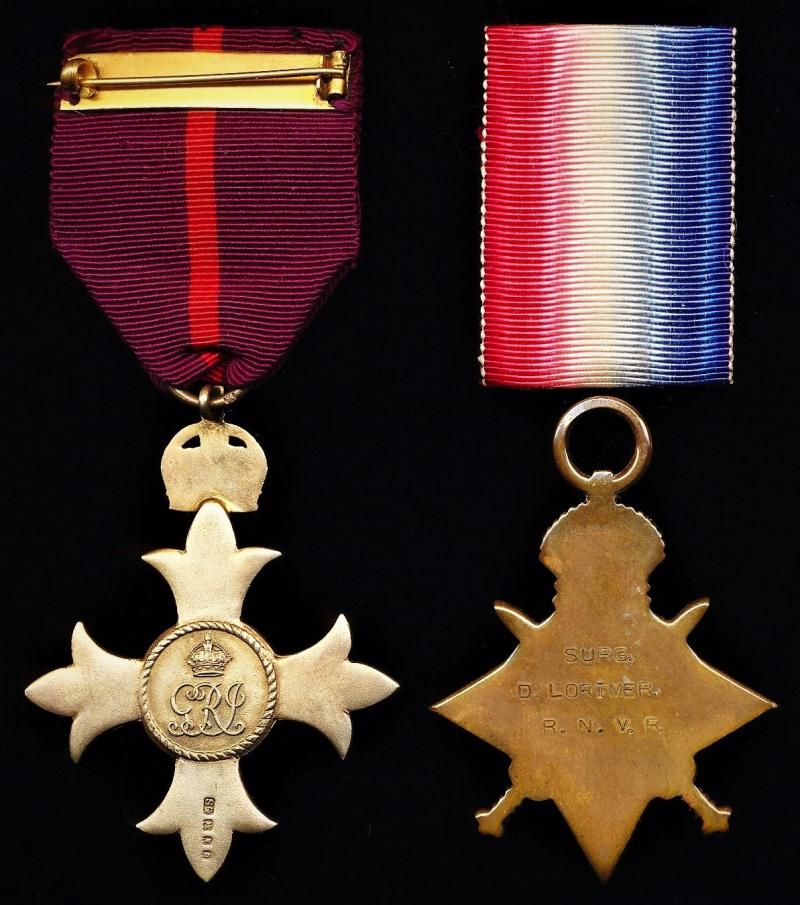 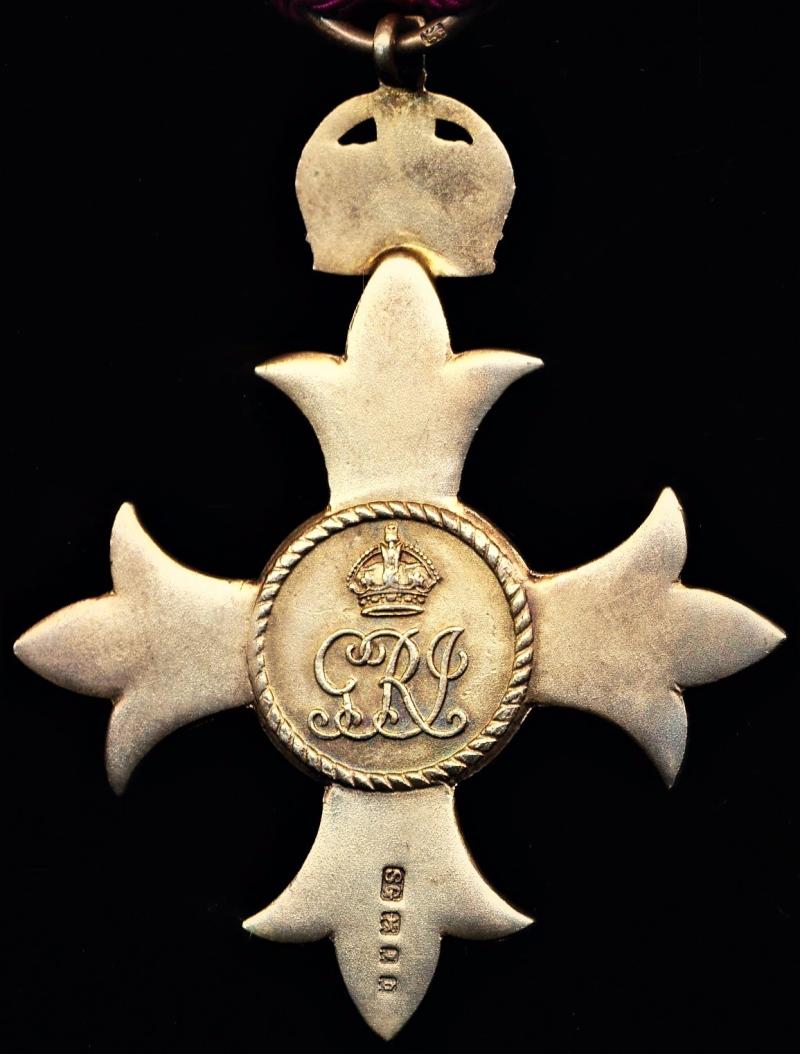 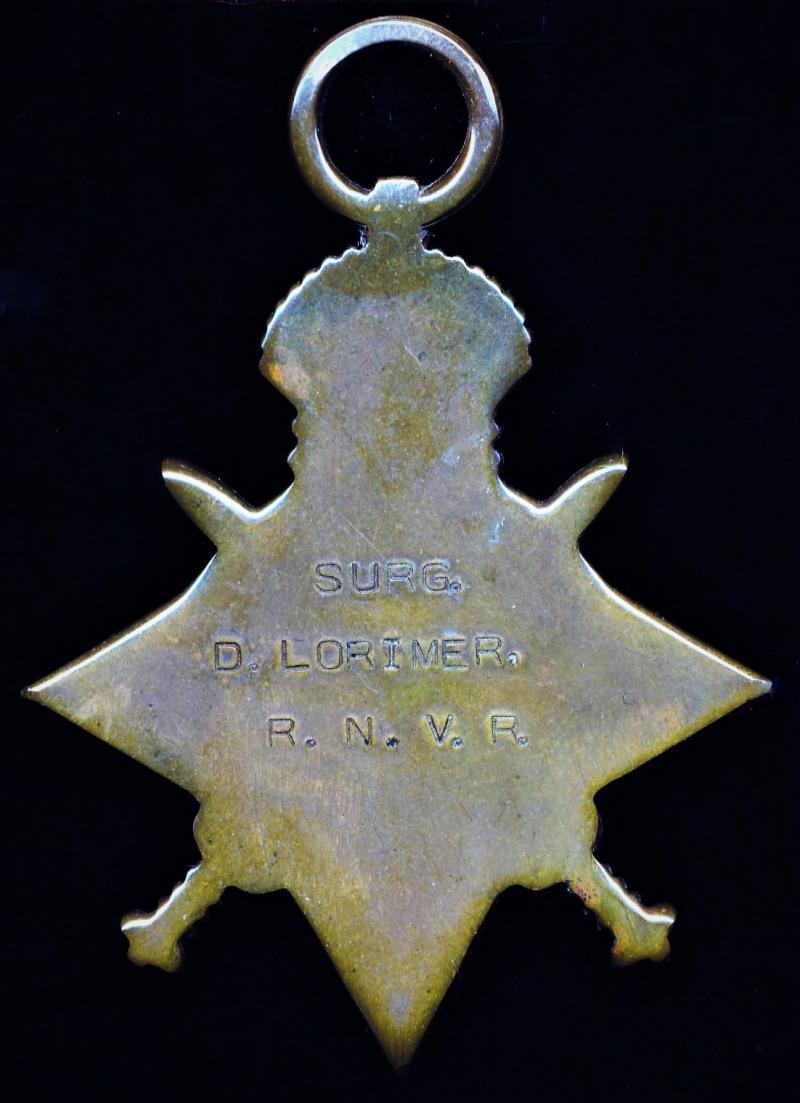 A). Officer of the Order of the British Empire (Military Division). OBE 1st type badge, with hallmark for 1919

Awards verification: The OBE and 1914-15 Star verified as entitled per the London Gazette and respective Admiralty medal roll(s) cited below:

- OBE: Published in London Gazette issue of 22 August 1919, an award specifically awarded for:

For "valuable services in H.M.S. " Bacchante " and at the R.N. Hospital, Granton

Duncan Lorimer - possibly the most quoted / referenced British Naval Surgeon of the Great War - was a Surgeon aboard the Battlecruiser H.M.S. 'Bacchante' at ANZAC Cove, Gallipoli Landings, 25 April 1915, and latterly present aboard the Battleship H.M.S. 'Malaya' at the Battle of Jutland, 31 May 1916, this latter the largest naval battle of the Great War. Fortunately, for posterity Duncan - was a prolific writer, who maintained detailed logs of his services aboard both 'Bacchante' & 'Malaya'. His private papers, were deposited to the Imperial War Museum circa 1978, where they can be consulted see 'Documents. 7184'. Of main interest are the 2 x volumes of Type Script details (149 pages) - copies of his Naval Journals are also held at the Liddell Hart Collections of Leeds University

Ts transcription (149pp) of a very detailed and fluent journal which he kept from August 1914 - August 1917 covering his service as a Surgeon RNVR in the cruiser HMS BACCHANTE on patrol and other duties with Cruiser Force "C" in the North Sea, August - September 1914, based on Plymouth and Gibraltar for patrol and escort duties in the English Channel, October 1914 - January 1915, in the Eastern Mediterranean for operations off the Syrian coast, February 1915, at Suez, March 1915, and preparing for and participating in the landing at Anzac Cove, Gallipoli (25 April 1915), and involvement in the Battle of Jutland (31 May 1916), describing conditions in the ship, the morale of the ship's company, his treatment of the wounded from Heligoland Bight, early references to the U-Boat threat, and criticisms of the lack of liaison between the Army and the Royal Navy.

Bacchante was a 12,000 ton 'Cressy' class cruiser of 1901. Obsolete by the Great War, she was sent, along with several other pre-Dreadnoughts, to support the Gallipoli landings at Anzac Cove on the 25th April 1915. Armed with 2-9.2in. breach loaders and 12-6in guns (along with 12-quick firing guns and 2-18in. submerged torpedo tubes) she suppressed the Turkish guns by actually touching her bow to the beach to get a better position. She remained for several months and was particularly effective during the Third Attack on Anzac Cove on 19th May where she and three other pre-Dreadnoughts again suppressed Turkish artillery with good effect. Her commander, Algernon Boyle, latterly supervised the evacuation of Anzac Cove, but Bacchante was not present having been sent to the Mediterranean, and then as flagship to Sierra Leone for the last year of the War. Paid off, she was broken up in 1920